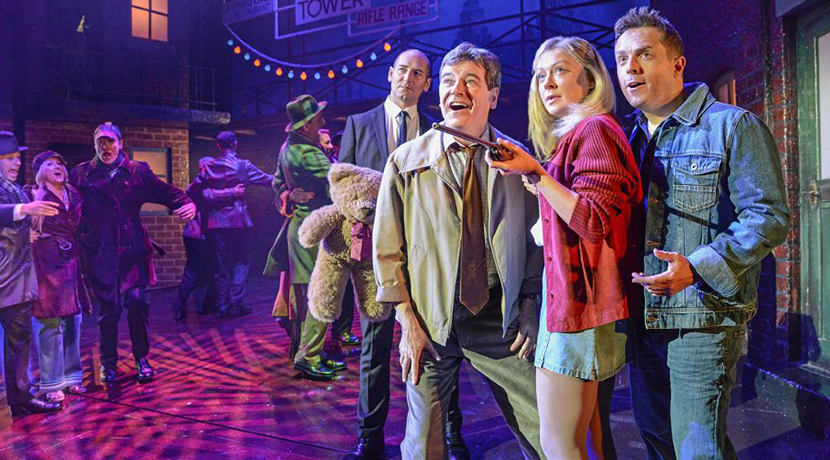 The multi-award winning show, written by Willy Russell, tells the story of twins who, separated at birth, grow up on opposite sides of the tracks, only to meet again with fateful consequences.

Although it’s effectively a class-driven ‘scouse melodrama’, to describe Blood Brothers as such is to greatly underestimate the emotional response it produces within its audience.

The show features adult actors playing children, a narrator who wanders through the scenes with warnings of impending doom, a good helping of sharp social awareness to counteract the sticky sentimentality and a raft of much-loved musical numbers, including Bright New Day, Marilyn Monroe and the emotionally charged Tell Me It’s Not True. It’s also one of only three  musicals to have been performed more than 10,000 times in the London West End.

Few musicals have been met with such resounding acclaim as Willy Russell’s Blood Brothers. With the book, music and lyrics all written by one man, this musical is a rarity in more ways than one. Blood Brothers also remains at the forefront of musical theatre excellence, as it tackles continually relevant themes including mental health, the class divide and street violence.

The musical tells the tale of star-crossed brothers. Separated at birth because their biological mother couldn’t afford to keep them both, twins Mickey and Eddie grow up at opposite ends of the class system: Mickey remaining with his mother and many siblings in their council house and Eddie growing up on the more affluent side of town.

Returning to the role of Mrs Johnstone yet again is Lyn Paul, and boy are we glad that she did. Lyn made her musical theatre debut in the 1997 Bill Kenwright production of Blood Brothers on the West End. While the musical was already a smash-hit, Lyn took the character of Mrs Johnstone onto an entirely different level - one that is yet to be matched by any other actress since.

With an extremely moving performance to match her silky smooth voice, Lyn Paul’s reprises of Marilyn Monroe bring the whole musical together as much as the presence of the narrator. While the narrator points out the characters’ misdeeds, Mrs Johnstone as a pseudo-narrator watches helplessly and with great sorrow. As the story progresses Mrs Johnstone’s Marilyn Monroe shifts from a song about beauty, dancing and joy, to one of emotional suffering and death - one of the many marvels of Russell’s lyrics.

Whether you believe in fate and superstition or not, the connection between the brothers is palpable and undeniable. Mickey and Eddie are continually drawn towards each other despite their mothers’ best efforts, becoming best friends as children and teenagers.

The qualities they admire about each other as youngsters embrace their opposing backgrounds: Mickey’s potty mouth and love of rough and tumble; Eddie’s prim and proper neatness, willingness to share sweets and love of the dictionary. This comes to a head in the wonderful duet That Guy. Those same differences, however, become a source of resentment into adulthood as Mickey watches Eddie prosper while his own life falls apart.

Willy Russell’s Blood Brothers accurately captures childhood innocence and the class struggle, with devastating consequences. It is, however, not all doom and gloom, as the musical is also full of warmth and laughter to create a perfect balance.

Not only that, but Russell’s uncanny ability to create full, multi-faceted characters, and tell their life story in such a short space of time, is unrivalled by any other musical. The connection the audience feels to the brothers only makes their inevitable demise all the more devastating.

Alexander Patmore (Mickey) and Joel Benedict (Eddie) do the perfect job of breathing life into Willy Russell’s words. Their electric chemistry on stage turns to loathing; the twinkle in each others’ eyes when they’re together misting over with envy.

Mickey is cheeky, mischievous and a little bit dim - and we love him for it. Patmore played this part with style and nuance, from initial slapstick comedy scenes to Mickey’s descent into clinical depression.

Eddie is exactly what comes to mind when one thinks of a grass-routed English gentleman, but minus the pomp. He is blessed with a generosity that is far superior to the other upper class characters - namely his parents, Mr and Mrs Lyons. Benedict’s gentle, graceful approach to Eddie is exactly what the part needs and made him a joy to watch.

This performance excellence, however, was not contained to the three leads alone. All the cast performed with great exuberance and executed all lyrics and choreography to perfection. I particularly enjoyed Daniel Taylor as Mickey’s scoundrel of an older brother, Sammy, and Danielle Corlass as Eddie and Mickey’s kind, but spunky, love interest Linda. Chloe Taylor also did a fabulous job as Mrs Lyons, especially in capturing her jealousy of Mrs Johnstone and possessiveness over Eddie.

By curtain-down there were few dry eyes in the house as the audience joins in the mourning for twins Mickey and Eddie, who were each born and killed on the same day. Certainly every audience member was on their feet to shower this wonderful cast with rapturous applause. Blood Brothers is the most astounding musical in every regard: a must-see for everyone.