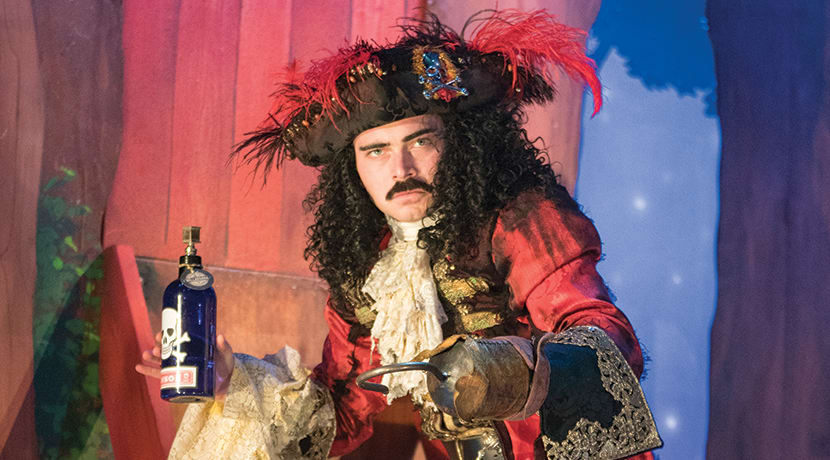 Mischief Theatre present a 'riotous' spin on a timeless classic.

A play about a play that goes wrong isn’t a new idea by any means, but it’s certainly a winning one, as the plaudits garnered by this cheeky hit ably illustrate. One reviewer laughed so much he feared he was going to hyperventilate, another admitted his funny bone had been well and truly struck by the piece, while a third laughed and laughed until ‘the tears ran down’.

Having first introduced audiences to the Cornley Polytechnic Drama Society in the Olivier Award-winning The Play That Goes Wrong, Mischief Theatre Company here let loose those selfsame comic creations on a production of JM Barrie’s children’s classic. The only trouble is, the bumbling thesps are more than a little accident-prone. So much so, in fact, that they’re not even sure they’ll manage to reach the curtain call, let alone Neverland...

Mischief Theatre are touring yet another of their comedy plays filled with mishaps and mega mistakes to follow on from the resounding success of The Play That Goes Wrong and The Comedy About A Bank Robbery. The company even recently made it onto our screens too, with The Goes Wrong Show debuting at Christmas.

By all accounts, Mischief’s shows are a hoot: many report howling and crying, and others laugh so much they’re left in physical pain, at the trail of destruction left by fictional theatre company Cornley Polytechnic Drama Society. Peter Pan Goes Wrong certainly had an impressive legacy to live up to when it opened in Birmingham yesterday evening…

The production certainly has all the elements to make the perfect Peter Pan: flying, fairy dust, pirates, mermaids and more. So could Cornley pull it off without a hitch? Of course not; frequenters of Mischief Theatre have learnt as much by now.

The revolving set is broken, Peter is flying like he has a death wish and the stage’s electrics are dodgy, so maybe Tinkerbell should take off her costume lights… The mixture of slapstick comedy, irony, general silliness and impeccable timing that Mischief employ create a series of unfortunate events (or fortunate in our case, as they are quite funny) that brings Cornley’s family show crashing down before our very eyes.

Some of the best moments came from audience interaction, including choosing to ignore the Cornley president’s consistent (and deliberate) insistence that their production of Peter Pan is certainly not a pantomime. We also shaped the course of the story, trading love rat Peter Pan for the crocodile as the hero of the hour. Tom Babbage certainly brought the house down as Cornley’s most lovable cast member Max - and Neverland’s sweetest crocodile on wheels. Ethan Moorhouse, in particular, also impressed as Cornley’s stage manager, Trevor.

Peter Pan Goes Wrong certainly made me chuckle, but I was expecting to guffaw. In comparison to their previous work, Mischief Theatre fall a little short on this occasion. Nevertheless, this show’s entertainment value makes it a worthwhile night out at the theatre - and certainly a unique experience that only comes once in a blue moon.