The Twisted Tale Of Hansel & Gretel 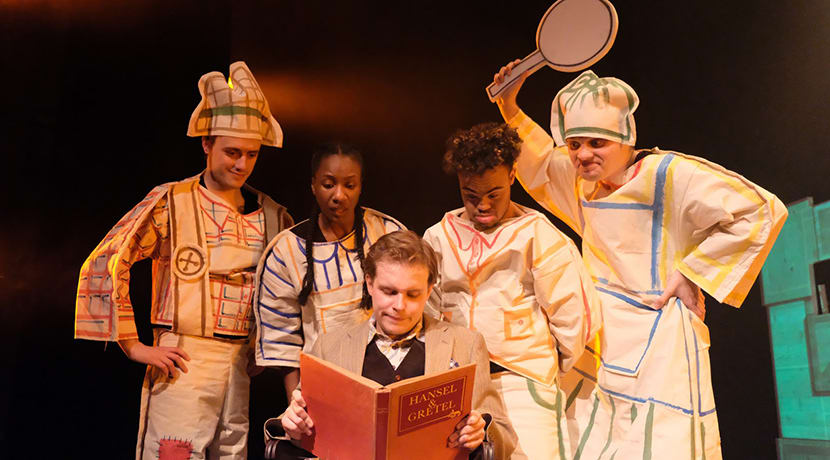 Imaginative version of the Brothers Grimm classic tale for children.

A flustered storyteller is joined by a mischievous mocking bird as he follows Hansel and Gretel deep into the forest. All is not what it seems, as the characters start to tell their own version of this peculiar adventure.

Open Theatre Company performed their first ‘Twisted Tale’ back in 2018. Following a successful pilot tour visiting four venues, it is only appropriate that they have returned to Birmingham Hippodrome this week (who have co-produced the show) to launch their 2020 tour, prior to visiting another twelve UK theatres.

Open Theatre Company are one of the country’s leading promoters of learning disabled arts and are celebrating their 30th anniversary this year. The Twisted Tale of Hansel and Gretel is the first in a trilogy with another two family-friendly shows being created over the next three years.

The Hippodrome’s Patrick Centre is well suited to host the production, which features a seven-strong cast plus backstage crew, of whom the majority have a learning disability and/or autism. The show challenges the classic fairytale plot and gives an alternative view, which is exactly what the audience are asked to embrace when it comes to the production as a whole.

Kate Unwin’s set design allows plenty of scope for creativity for Director, Esther Simpson, with the houses being built from wooden boxes scattered across the playing space. There are also two well-utilised flats at the back of the stage, which are projected onto with animation to further assist in setting the scene.

The script is packed full of humour and whilst it sometimes feels a little stop-starty, the content moves at a good pace. Each character has been given a strong identity and even the addition of a Duck doesn’t seem out of place! Whilst Vicki Taylor playing the duck doesn’t have any spoken lines apart from the occasional ‘quack’, she is happy to be a witty entity throughout the show and turns into the true hero of the piece towards the end.

Storyteller Nicky Priest has a great energy and works well with Charles Craggs as the Mockingbird. Craggs wrote the songs and composed the music, which all fit into the plot seamlessly. The incidental music such as the duck theme is where he truly excels.

Jessica Rowe and Rishard Beckett have a lovely relationship as Gretel and Hansel respectively, with Rowe bringing a special charisma to the company. Luke Greenwood is very entertaining as the Dad/Chef with his amusing one-liners and Jake Jarvis as the Stepmother/Witch is comical in his characterisation.

The Twisted Tale of Hansel and Gretel plays at Birmingham Hippodrome until Saturday 15 February and tours the UK until May 2020.