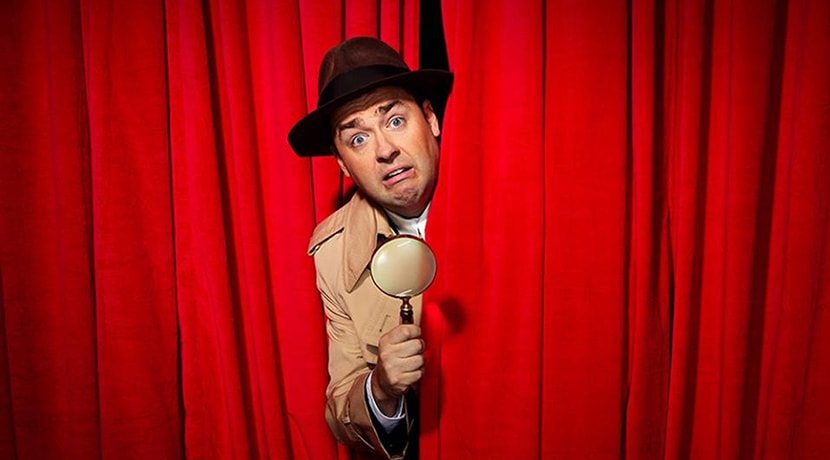 It’s murder putting on a new musical - literally! Jessica Cranshaw, star of the new Broadway-bound musical Robbin Hood, has been murdered on stage on opening night! The entire cast and crew are suspects. Time to call in the local detective, Frank Cioffi, who just happens to be a huge musical theatre fan. With a nose for crime and an ear for music, Frank has his work cut out trying to find the killer whilst giving the show a lifeline.

When the star of a musical that’s tipped to be a Broadway hit is murdered on the show’s opening night, detective and musical-theatre fan Frank Cioffi is called in to investigate...

Tony Award-winning mystery-comedy musical Curtains is a John Kander & Fred Ebb show. But unlike the legendary songwriting duo’s better-known offerings, Cabaret and Chicago, it has never toured the UK.
Until now, that is...

Taking on the lead role of Frank is Jason Manford.

“Curtains is an unashamedly showy Broadway-style musical,” says Jason. “It’s a comedy whodunnit. Without trying to put it down, it’s sort of like Cluedo as a musical. It’s a brilliant story, but it’s also got these fantastically funny characters from the musical’s book and Kander & Ebb behind the music and lyrics. Curtains has never been to the UK before, so I suppose in that way it’s like finding an album you didn’t know your favourite artist had recorded. Kander & Ebb really are legends in this industry. Every single song is a winner!”

Jason is well aware that performing in a show written by such a highly respected pair brings with it extra pressure: “There’s always pressure on performers, regardless. I’m very aware that people have paid good money and given up their valuable time to see something I’m in. We put months and months of time and
effort into making sure a show is worth seeing; worth buying tickets for, worth getting a babysitter and maybe even a taxi and a hotel room, too. I would hate for anyone to be disappointed. Sure, there’s an added pressure with it being Kander & Ebb, but there have been lots of other instances where I’ve worked with high-profile people - like Mel Brooks, for instance - or in high-profile shows, such as Chitty Chitty Bang Bang. I try to make sure that the shows I’m in are ones that I would go and see myself. Curtains is definitely that. In fact, it’s something that I’d probably go and see a couple of times, especially because of the whodunnit aspect.”

Speaking of whodunnits, why does Jason think the genre is so popular?

“I don’t think our love of crime and mystery stories has ever gone away, especially in Britain. We’ve had the likes of Agatha Christie and Arthur Conan Doyle. Then we’ve had the American imports of Murder She Wrote and Columbo. Now you can’t put on the TV without seeing a crime drama. We just love trying to work it out! We feel clever and a little smug when we get it right - and we’re really good at creating them, too.

“What’s great about Curtains is that it really plays to the cast’s strengths. We’ve taken the Tony Award-winning Broadway show and added British sensibilities to it. Obviously it’s still set in 1959 Boston, but it’s not going to be something that’s from a completely different world as far as the audience is concerned.”
Alongside its whodunnit element, Curtains’ other great attraction is its humour…

“Frank is a very funny character. I guess the main thing is that he’s actually funny without realising it. He doesn’t really do any one-liners or gags, but he’s funny because he’s a bit naive. He definitely says a lot of funny things without wanting to. He’s a lot of fun. But it’s also a challenge for me as a comedian to play his funny lines down, rather than being like, ‘Tah-dah, there’s my big joke’.

“There are so many other funny characters and actors in Curtains, too. I just think people will have such a fun time coming to see it. Every day when you pick up the paper or scroll through Twitter, there’s misery and disaster to read about, so it’s nice to have a show coming to your town that allows you just to switch off and forget about the world.”

So when did Jason first realise he had a knack for comedy and performance?

“My family on my mum’s side were performers, so I was brought up around people singing and entertaining others. I used to get up on stage and do bits and bobs too. At school I was involved in all the plays, either off or on stage, so that’s what I ended up being interested in. English and Drama were my favourite subjects at school - I struggled to find anything else that I felt the same way about, really. I think part of that was down to the teachers. Having teachers who inspire you is the most valuable thing you can have.”

There were also a number of high-profile comedians who had a huge influence on Jason: “I liked a lot of the comedians that my dad liked: Billy Connolly, Jo Brand, Dave Allen. Then, seeing someone like Peter Kay live made me sit up and realise that stand-up was amazing. He’s an absolute genius. I think because I then got to know him a little bit, I got to see how hard he’d worked and how much effort he put into everything he did. Being a stand-up comedian works very much the same way as many other aspects of life - you get out of it what you put into it. Peter Kay is an incredibly hard worker, and I definitely learnt a lot from him.”

Given that Jason can sing and act as well as be funny, it’s not surprising that he’s had a varied career: “I really love the mix. It means I never get bored of anything I do. I’m excited about going on tour with Curtains because we’re bringing what is essentially a West End-quality show to people’s towns and local theatres, which I think is so, so important. If I’d not seen theatre from an early age, I wouldn’t be where I am today. So I hope this show inspires people, and that the tour is accessible for all.

“Beyond Curtains, I guess my main aim is to write something that other people will perform. I’ve done stand-up, meaning I’ve written shows and performed them myself, and I’ve been in musical-theatre productions and on TV, performing other people’s words, so the next place to go will be to have other people performing my words.”

Kander & Ebb are best known for their earlier work on Chicago and Cabaret. One of their lesser-known works, a musical comedy called Curtains, opened on Broadway in 2007, after the death of Fred Ebb, where it received mixed reviews. The first UK tour is playing at the Alexandra Theatre in Birmingham this week.

Using a ‘show-within-a-show’ concept, Peter Stone and Rupert Holmes’ book centres on a theatrical company who are performing a stage production of Robbin’ Hood in Boston, prior to an anticipated run on Broadway. The leading lady gets murdered at the curtain call on opening night so Lieutenant Cioffi is brought in to conduct a homicide investigation…but also has a passion for musical theatre himself.

The script is incredibly witty and there are some ingenious one-liners particularly from the theatre director, Christopher Belling, played brilliantly by Samuel Holmes. This is also reflected in Ebb’s lyrics. Whilst the show is dark at times, the comedy element greatly anchors the material by striking a good balance of seriousness and humour.

David Woodhead’s set design primarily represents the backstage of a theatre with plenty of exposed brickwork. Cloths are flown in (smaller than the vast expanse of the Alexandra stage) to represent the Robbin’ Hood scenes. Gabriella Slade’s costume design is exciting with both standard late 1950’s wear and stunning Robbin’ Hood Wild West costumes catered for. The lighting by Tim Mitchell separates the two settings well with clear differences between the two.

Paul Foster’s direction has clear intentions whilst not overly creative and the choreography by Alistair David can occasionally be a little pedestrian but the farcical element is drawn upon well. David thankfully manages to show off Alan Burkitt playing Bobby because he is a phenomenal dancer and greatly stands out in the company numbers.

Jason Manford plays the dreamer side of Lieutenant Cioffi very competently and is extremely well sung. He is not the best choreographically but as his character is not a professional performer, he strikes the right chord against the rest of the cast. Rebecca Lock plays brazen producer, Carmen Bernstein, flawlessly. She’s strong and tough but underneath just a Mother who will do anything to help her daughter succeed. ‘It’s A Business’ is the 11 o’clock number and she demonstrates just why this part was made for her.

Carley Stenson is expertly cast as lyricist Georgia Hendricks with ‘Thataway’ towards the end of Act One being a show stealing moment. Andy Coxon playing composer Aaron Fox is vocally superb and ‘I Miss The Music’ is a particularly vulnerable and special number.

Curtains plays at the Alexandra in Birmingham until Saturday 9 November and tours the UK until April 2020, including a limited run in the West End over Christmas.