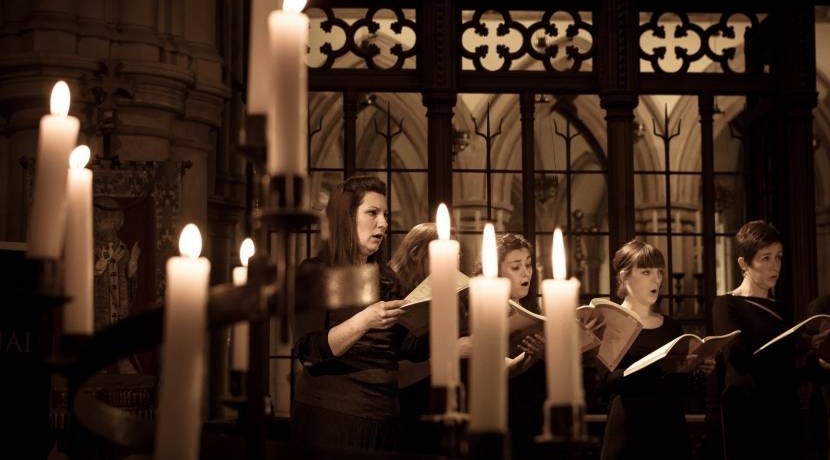 With Christmas now almost upon us, Armonico Consort return to the Collegiate Church of St. Mary in Warwick for their sell-out Carols by Candlelight concert. The tremendous popularity of the show is down to more than just its timing: Christmas is a huge event in the calendar of any choir, and in this case, it's opportunity to experience some of Armonico's finest work.

This year's show includes two world premieres by Toby Young, the first of which – rather remarkably, given the strength of the performance – is a very last minute addition, only finalised a week ago. Overlapping with the first reading (Thomas Hardy's 'The Oxen'), 'Introit' provides a spine-tingling opening, with singers arranged around the church before taking up their central positions in time for a magnificent rendition of Morten Lauridsen's always moving 'O magnum mysterium'.

The sharp contrasts between 'Introit' and two other, very different pieces on the programme demonstrate Young's impressive versatility as a composer. The evening's second premiere comes in the form of a much cosier, simpler setting of 'Twas the Night Before Christmas', with warmth and singability enough to slot easily into any family's Christmas carol repertoire. Throughout the evening, the choir are joined by the young AC Academy Singers, and by separating out parts for men, women and children, this new commission really gives the kids a chance to shine. Fittingly, it's followed by John Williams' similarly wide-eyed 'Somewhere in my Memory' (you might recognise it from Home Alone).

Falling somewhere between the candy cane sweetness of these and the thrilling opening number is Young's 'The Astronomer's Carol', a lively, dramatic piece from 2016 with a brisk triple time rhythm and playful organ accompaniment from Philip Scriven.

The first half of the concert incorporates a fascinating bit of local history, with a reading taken from the 1534 Pageant of the Shearmen and Tailors of Coventry. The extract concerns Herod's slaughter of the innocents, and features the inspired invention of a furious, desperate mother who threatens to fight off the soldiers with her pot ladle. But in true medieval style, this almost comical image is quickly undercut by the shocking starkness of the line, “And here they kill the children”. The brutality of it makes it hard not to be reminded of the ongoing carnage in the Middle East today.

Naturally, this segues neatly into the Coventry Carol, though it's not the soul-crushingly bleak version you might be most familiar with. Instead, a more melodic, genuinely lullaby-like setting has been selected, with a beautiful soprano solo made all the more plaintive for a little lightness woven into the texture of the music. That said, it's still dark enough for 'In dulci jubilo' to make a startling follow-up!

Other interesting reading choices include John Evelyn's diary entry from Christmas Day 1657, during the Puritan ban on observing festive traditions under Oliver Cromwell. Evelyn finds himself among a group surprised by the authorities during an illicit Christmas service, and although he is eventually let off, many of the others present are imprisoned. In the light of current concerns about growing intolerance of religious and cultural difference, the centuries-old story has some uncomfortable resonances for our own time. A poem from an anonymous writer, “whose home is on the streets” confronts us with questions about the true meaning of Christmas, while Charles Dickens' essay, 'What Christmas is as we Grow Older' also entreats us in its own way to “shut out nothing” at this time of year.

The second half of the concert opens with the always majestic 'O Come, O Come Emmanuel', here featuring an excellent baritone solo and a stunning ending, complete with resonant organ accompaniment. The joyous Sussex Carol that follows is another highlight. Scriven's organ-work is equally wonderful 'Once In Royal David's City', glowing during a triumphant final verse.

The concert closes with an extraordinary rendition of Silent Night, building slowly with rich, complex harmonies and key changes. If this isn't enough to leave you full of festive joy, then probably nothing will.