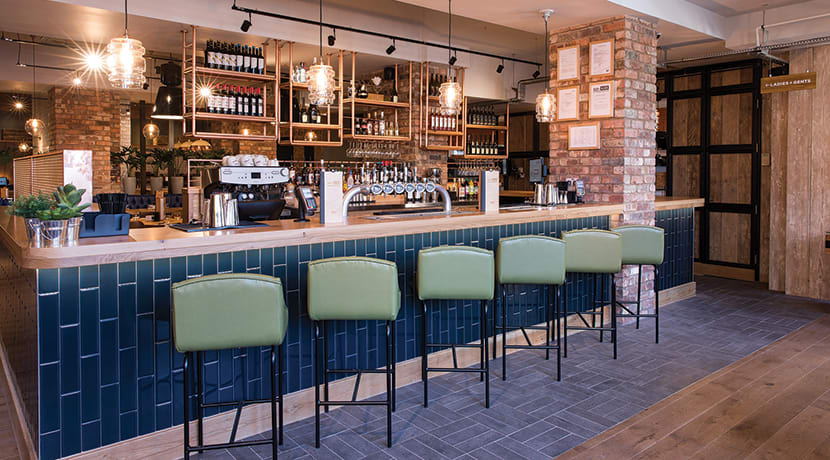 Bar + Block has not only been repositioned as a challenger to the UK’s growing number of steak house chains, it’s also serving up an all-day food offer designed to make the most of being strategically sited adjacent to Premier Inn hotels - both the restaurant chain and the hotel chain are part of Whitbread’s portfolio.

The newest Bar + Block (the seventh, but there will soon be nine) is located in Leamington - next door to the Premier Inn (obviously) and at the bottom of the town’s main drag, The Parade.

The stylish venue is nicely turned out, if a little charmless - on the night I visited, the bar and drinkers’ seating area nearest the door was largely empty, despite the restaurant being packed, making it not only a wasted space but hardly a welcoming site for anyone peering in through the window.

The dining area is a little further back, and once settled at a booth table - definitely the best option - we found the vibe definitely improved; even more so with the splendid service (our waitress, Georgie, was helpful and friendly in equal measure) and a drink in hand. Speaking of which, the bar’s selection is considerable, with a healthy number of lagers, craft beers and ciders, a decent wine list and a wide range of cocktails, the latter of which are half price from Monday to Thursday between 5pm and 7pm....

...Which was no good to us at 8pm! So we perused the menu while each nursing a pint of heavenly craft lager Camden Hells.

Food options range from some interesting nibbles and grazing plates through to salads, fish dishes, grills, burgers and of course steaks, with prices ranging from £3 (the nibbles) up to £23 to £28 for one of the top-of-the-range steaks - all from British breeds of cattle reared across the Pampas in South America, all aged for at least 28 days and all hand-cut on-site, according to the menu.

My colleague and I chose a couple of the tapas-style grazing plates to start, coming up trumps with the wonderful salt & pepper squid - beautifully delicate, in a smoky tempura-style batter - but not getting quite as lucky with the cheese & jalapeno-stuffed dippers - mini pasties that were filled with a yellow mush the consistency of baby food and just as appealing.

Our main courses took a similar trajectory, with another major success and another disappointment. We both chose from the ‘speciality cuts’ section of the menu. My spiral cut fillet was a beautifully tender, perfectly cooked piece of meat with bags of flavour, but my colleague’s churrasco de chorizo - a 10oz spiral cut sirloin - was tougher and fattier than my steak and, if anything, had been cooked rather more rare than the medium rare he’d ordered. We later noted that the menu recommended medium as the optimum cooking time.

Both steaks were supposedly marinaded in garlic and parsley for 24 hours, but you could barely tell - the additional flavours were so subtle as to be almost negligible. And given the prices (£24.50 and £22.95 respectively), I’d have expected more accompaniment than a smattering of samphire and a pot of (albeit perfectly cooked) chips. The latter could be traded for salad, but it would cost more to have both, and sauces - I chose the excellent chimichurri - also came at an extra cost.

Mercifully, the best was yet to come, in the shape of two tremendous puddings (there are no ‘desserts’ on this restaurant’s menu) - a fabulously decadent chocolate churros sundae and an excellent sticky toffee pudding. The former featured two tall churros (perfectly crisp on the outside, soft and warm on the inside) poking like bunny ears out of a jam-jar of delights (salted caramel ice cream, brownie chunks and toffee sauce). The latter featured a really light, date-studded sponge lathered in toffee sauce, the sweetness of which was subtly offset by salted caramel ice cream.

The perfect puddings certainly ended our evening on a high note, but the disparate quality of our steaks (the venue’s main draw, after all) was a definite cause for concern. So unless you’re an expert, I’d recommend consulting your server and/or the guide on the back of the menu to determine the best cut of meat for you, and the best way to have it cooked. There’s too much at steak not to…