Check out what Coventry City of Culture has planned to keep you entertained this autumn...

A CRASH COURSE IN CLOUDSPOTTING

Both an immersive sound experience and a live show, A Crash Course In Cloudspotting weaves together the stories of people living with invisible disabilities and chronic illnesses. Over the past 25 years, Raquel Meseguer Zafe has collated more than 250 stories. These form the basis for this intimate exploration of human connection and the subversive act of lying down.
In what’s described as ‘a fragile and beautiful space’, visitors will be able to illuminate their own horizontal journey with ‘a gentle choreography of lights, activated in the space by patterns of rest’...

WHERE: various locations across the city  WHEN: Fri 8 - Sat 16 October

This week-long focus on arts and homelessness projects in Coventry is created by people with previous lived experience of being on the streets. Events include a staging of The Cardboard Citizens’ The Ruff Tuff Cream Puff Estate Agency (see feature on page 8) and the Send A Smile postcard exhibition - both at the Belgrade Theatre. An open-mic session featuring music, poetry and spoken word also features, as does the St Basils Sleepout at Coventry Cathedral.

WHERE: Herbert Art Gallery & Museum & various other locations  WHEN: 8 October to 23 January (until 6 February at the Herbert)

The third Coventry Biennial launches this month at seven exhibition venues across Coventry & Warwickshire.
Taking the title Hyper-Possible, the Biennial will include developed artworks that ‘imagine radical futures, enable new forms of knowledge production, reflect on our relationships to the places that we live, and explore the social and political impact of our identities and the impact that human activity is having on the planet’.

WHERE: The Belgrade Theatre  WHEN: Sat 9 to Sat 16 October

Brand-new musical from the critically-acclaimed Cardboard Citizens, The Ruff Tuff Cream Puff Estate Agency is based on the true story of how a small group of revolutionaries proved that real change is really possible.

It’s the 70s and there’s a nationwide housing crisis.  John “Mad Dog” Sky is at the helm of the world’s first estate agency for squatters. Lu is hitching from Coventry away from a difficult past towards the bright lights of the city - where punk is just around the corner and anyone can start a band. And Alan & Rosie are plotting to turn their west London neighbourhood into a brand-new nation.

This ‘travelling festival of art and hope’ is taking place in support of refugees. It features Amal, a 3.5metre-tall puppet who, in journeying 8,000km across borders, is representative of the plight of displaced children, many of whom are separated from their families. Amal’s mission is to spread the message: ‘Don’t forget about us’. The people of Coventry are invited to walk through the city alongside the puppet, ahead of Amal ‘witnessing’ the first Children’s Citizenship Ceremony & Celebration. An evening of theatrical performance follows the ceremony.

The Walk Festival is a collaboration between Good Chance and Handspring Puppet Company. Good Chance is the creative team behind the play The Jungle - a production which shines a light on the refugee crisis.  Handspring, meanwhile, is perhaps best known for having created the life-size puppets which featured in the award-winning stage adaptation of Michael Morpurgo’s children’s novel, War Horse. 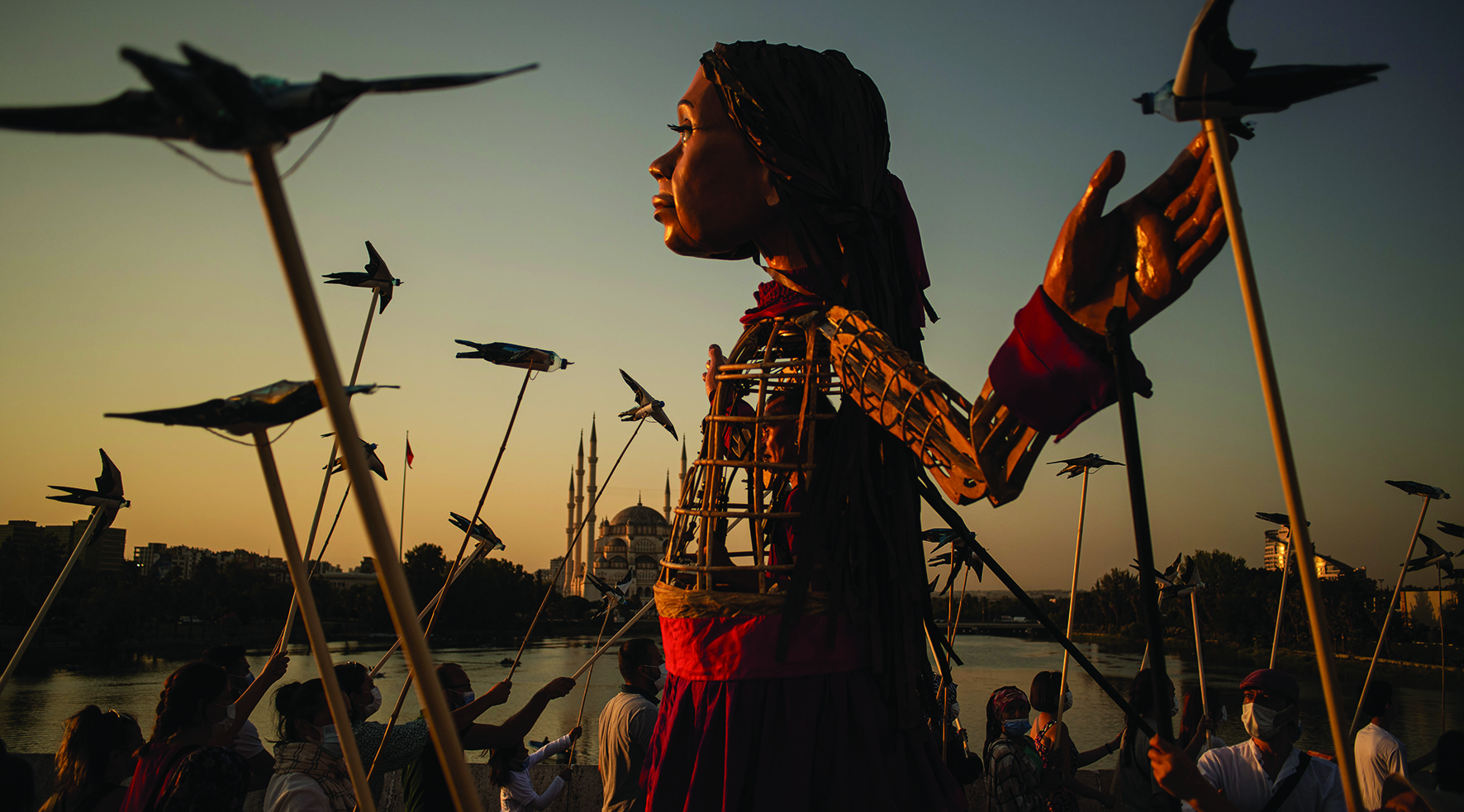 This site-specific exhibition will temporarily replace Coventry Cathedral’s Angel Of The Eternal Gospel - a figure in John Hutton’s great glass West Screen, which was destroyed by vandals in early 2020.
Dresden-born artist Anne Petters will be the first to exhibit her works in this designated space. A Fellow in Glass at the City & Guilds of London school, Anne uses glass, light and natural phenomena to ‘visualise and materialise the poetic spiritual of the everyday.’

Abundance has been created by a collaborative community of artists responding to four themes: light, sounds, hope, and love & freedom.
Starting and finishing at the Indian Community Centre, the Carnival of Lights will journey across the length of the Foleshill Road, weaving its way through residential streets while following a circular route.

Described as ‘a powerful digital TV series that truly breaks new ground’, SeaView is a six-part drama based on the experiences of working-class communities across the region. At the heart of the story is Steven, a university student with a bright future. While struggling to escape the cycle of poverty, crime and violence which has entrapped his family, Steven discovers he has a mysterious gift for prophecy...
But is being able to predict the future really enough to enable you to change it?...

For information on all upcoming Coventry City of Culture events, visit: coventry2021.co.uk