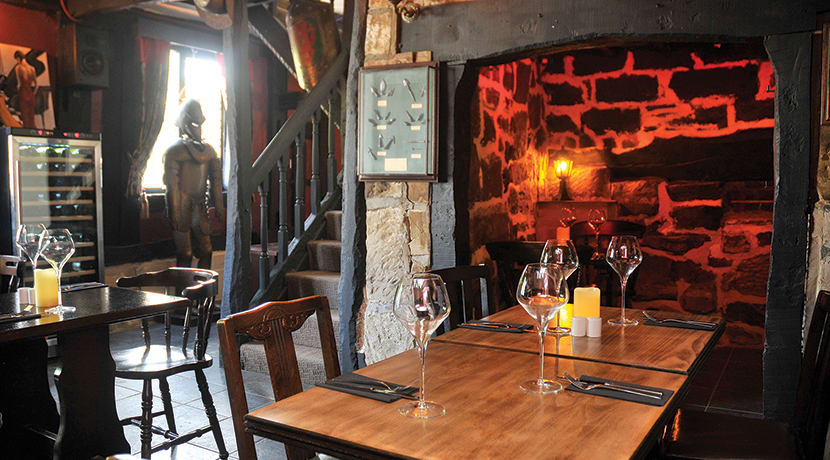 Britain’s love affair with Spanish tapas has well and truly blossomed this last decade. With high-street chains quick to claim the no-frills finger food as their own, the nation’s appetite for novelty shows no sign of abating. And whilst a historic Tudor inn located just a stone’s throw from Warwick Castle might not be the first place you think of to sup on a sangria, you’d be hard-pushed to find a more authentic taste of contemporary Spanish cuisine served from the heart!

The brainchild of restauranteur Alex Clayton - owner of Warwick’s award-winning Tasca Dali - Flamenco prides itself on its contemporary Mediterranean-inspired dishes, prepared with traditional cooking methods and enjoyed within the historic surroundings of one of the town's most iconic and atmospheric buildings.

For my own part, from the moment I stepped from the cobbled promenade into the warmth of Flamenco’s cocktail bar, complete with stunning 17th century Inglenook fireplace, I was transported from the chill of a typical British autumn to the warmth of sunnier climes. Small but perfectly formed, exuding historic atmosphere yet imbued with Moorish charm, this recently renovated Tudor inn has been lovingly restored to a brief which marries authentic Tudor detail with a fiery kick of neo-gothic Spanish flamboyance. The venue positively abounds with original period features; English oak panels, black-and-white timber frames and dry stone fireplaces sit happily alongside wine-coloured walls and moody, candlelit nooks which just scream rustic charm - all appreciated to the unmistakable notes of an ambient Spanish guitar soundtrack.

In keeping with the restaurant’s intimate surroundings, Flamenco’s menu is as eclectic as it is intriguing. Bringing together Spanish staples such as Iberian chorizo served with pear aioli Morcilla (traditional Spanish black pudding) and freshly cooked tortilla with pan-European-influenced dishes such as Oriental Calamari, Hummus and Turmeon Mussels served with vermouth sauce, Flamenco’s tantalising selection of contemporary ‘market tapas’ comes jam-packed with authentic ingredients, seasonal produce and - above all - genuine passion for the craft.

Be sure not to leave before sampling one of the restaurant’s signature ‘paellas’. The jewel in Head Chef Jose Enrique Peña Lopez’s culinary crown, they’re available in a choice of chicken, seafood and vegetarian - unrivalled in flavour and just perfect for sharing!

Taking the advice of our friendly waitress and opting for a glass of Tempranillo Rioja Viña Pomal Reserva 2013, our choice of appetiser was the traditional ‘deli board’ of mixed cheeses and cured meats, a culinary homage to Spain’s rich tradition of regional produce and the perfect opening to any sharing experience.

And what tapas platter would be complete without a generous serving of toasted bread and aioli, an intensely flavoured garlic-yoghurt dip infused with olive oil that’ll leave you eager for more - even if a kiss goodnight is off the cards.

After a refreshing glass of iced Hendricks Gin & cucumber tonic, it was time to get serious. Cue a generous helping of Pardon peppers, a Galician speciality with a fiery kick that made the experience of eating them not unlike a game of Russian roulette. From the Iberian peninsula, the chorizo in tempura with pear aioli was a delight to eat, served with its own lollipop skewer and infused with smoky hints of paprika, chilli and sweet pear.

The tried-and-tested choice of Spanish croquettes served with potato, chorizo and fresh cheese was everything you could ask for - effortlessly light in texture, easy on the crumb and irresistibly moreish.

For an authentic taste of the sea, our tapas platter also came complete with a generous helping of Russian salad - a Spanish staple comprising potatoes, carrots, mayonnaise and gherkins infused with the salty flavour of fresh tuna fish. The surprising addition of oriental calamari (squid marinated in ginger, yuzu, soya and coriander) provided a zesty and refreshing contrast to the rich, earthy flavours of the Southern European continent.

Our favourite small plate by far, though, was the Venezuelan ‘Tequedos’, or Columbian cheese stick. Hand-rolled and fried to perfection in a lightly spiced dough, these melt-in-the-mouth cheesy morsels really are too good to share, so be sure to order a double-portion!

So much more than just great food, tapas is an experience which, above all, is built on sharing, socialising and a sun-drenched desire to escape to foreign shores. Such was the unique ambience of Flamenco that leaving the warmth of the fireplace felt akin to a holiday that was coming to an end all too soon. Warm, welcoming and idiosyncratic in style, Flamenco’s abundant charm is matched by a genuine passion for the food culture and a willingness to let fresh produce speak for itself. This was tapas as it’s meant to be enjoyed - savoured without pressure, cooked to perfection, packed full of the unmistakable flavours of the Med and served with a quintessentially eccentric English twist!