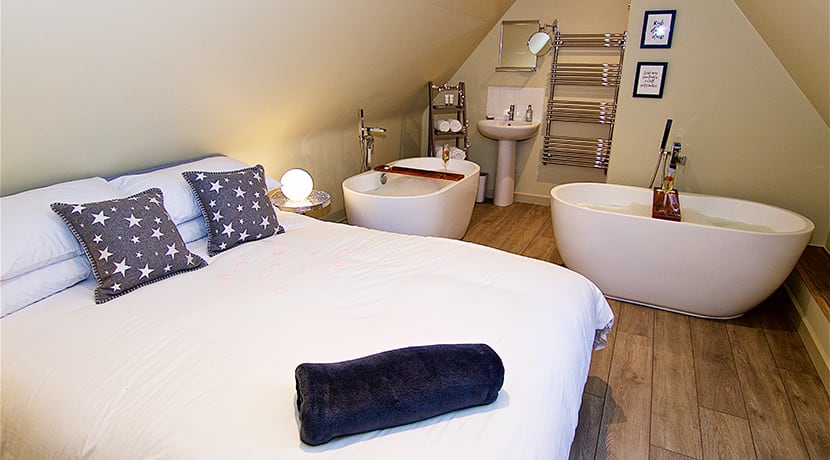 The dream continues to flourish for a south Warwickshire couple who have just unveiled the latest new holiday lodge on the site of their previous business.

Jo Carroll and Steve Taylor have converted part of their former baby day nursery into George’s Getaway, the fourth lodge at their boutique luxury glamping retreat in Upper Tysoe.

Nestled in an Area of Outstanding Natural Beauty on a private estate in the rolling Warwickshire countryside, Winchcombe Farm has become a huge hit with holidaymakers since it opened just 18 months ago.

And this latest conversion, which began life as stable and chicken coup, marks a significant chapter in the couple’s success story – one they say, has been driven by customer demand.

“We never anticipated that it was going to take off like this and prove as popular as it has,” said Jo. “We’ve welcomed hundreds of guests from over 20 different countries since we opened and are currently taking bookings for 2021.

“We’ve got several people who are booking for a fourth or fifth time and just can’t stay away!”

George’s Getaway now joins Bob’s Lodge, The Chicken Shed Lodge and Will’s Tree House - the only tree house in Warwickshire – at the farm.

The couple were forced to make a change in 2017 following the financial collapse of their nursery business - after 14 years.

Steve headed up a campaign following proposed changes to The Childcare Act 2016 which committed to giving families with working parents an entitlement to 30 hours of free childcare for three and four-year-olds. His petition to Stratford MP Nadhim Zahawi, warned that the resulting chronic underfunding for nurseries would render many of them unviable.

Steve, 62, said: “It was heartbreaking to close the nursery but it came to a point where we didn’t have a choice. We were subsidising the running costs by £5k a month and our savings ran out; the business just wasn’t financially viable any longer.

“The Government introduced 30 hours free childcare for parents in September 2017 and we were being paid less to deliver a service than it was costing us to provide. Warwickshire still receive one of the lowest funding rates in the country and even our local MP, who ironically is the Early Years Minister, couldn’t help us when we presented him with a petition with 6,000 signatures on from other nursery owners who found themselves in the same situation as us.

“Having spent all our savings trying to keep the 80-place nursery afloat, we took out a huge loan to open the holiday let business and crossed our fingers that it would work. We just had a gut instinct it would, and thankfully the gamble paid off.”

It enjoys sweeping views of the surrounding countryside from the lounge windows, with French doors that lead out onto a spacious deck area, featuring a seven-seater hot tub for exclusive use, pizza oven and barbecue.

Jo said: “We are blessed to be situated in an area of outstanding natural beauty and have some stunning scenery surrounding us. Our guests rave about the magnificent views and love watching the grazing sheep and cattle in the neighbouring fields and feeding apples to our ponies.”

The new lodge sleeps up to eight people in three bedrooms (and the geodesic dome) including a magnificent king-sized master bedroom, which boasts twin freestanding bath tubs. A family suite at the other end of the lodge has another king-sized bedroom with a corner bath, a twin children’s room and a ‘Jack & Jill’ (two-door) bathroom that joins them. There’s even a small window between the adults’ and children’s room, so they can be checked on at night without being disturbed.

There’s even a telescope provided to enjoy for some stargazing from the geodesic dome, which is positioned on a raised platform.

Steve said: “We designed George’s Getaway while listening to what our customers like. The first thing people want is a private hot tub, followed by the stargazing domes we’ve added on to raised platforms on all the lodges. They have huge appeal and we get people from all over the country coming to marvel at the wonders of the galaxy from our super-king sized circular beds. We are blessed with unpolluted night skies here, given our remote rural location, so it really is a great place to spot a shooting star.”

The kitchen is furnished with SMEG and Joseph Joseph accessories and, for those rainy days, there’s a 55inch TV and DVD plus a selection of board games. Guests can even make their own LEGO model art using the picture boxes and building bricks provided.

A welcome basket is left for all guests staying in George’s Getaway, including milk, fruit and delicious cake.

Pausing for little more than a breath, the couple are already planning work on their next lodge Ben’s Burrow, which they hope to open in summer 2020.