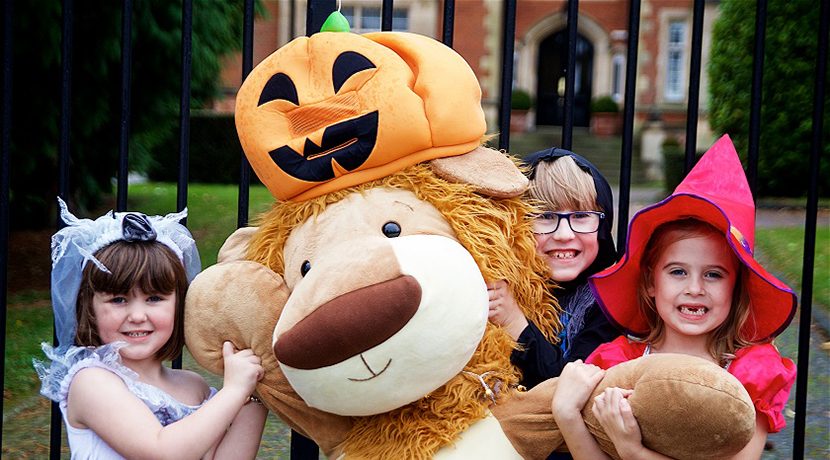 A Warwick community renowned for its flamboyant annual Halloween celebrations is keeping the tradition alive despite the pandemic.

Innovative parents Charlotte Fawbert and Lucy Field were determined to salvage the spooky fun which draws hundreds of children to Hatton Park, by this year turning it into a Covid-safe pumpkin trail.

Children are being encouraged to download a trail sheet and, between Thursday and Sunday, hunt for 12 Halloween-themed pictures displayed in windows throughout the estate.

Local families are then being invited to donate money they would have otherwise spent on sweets for trick-and-treaters, to Hatton Park-based charity Molly Olly’s Wishes.

Molly Olly’s was established in 2011 following the death of Rachel and Tim Ollerenshaw’s eight-year-old daughter Molly from a rare kidney cancer. The charity works to support children with terminal or life-limiting illnesses and their families.

Mascot of the charity is a therapeutic toy lion called Olly The Brave, who has his own Hickman line and a detachable mane which helps to explain and normalise the effects of chemotherapy. These form part of an Olly The Brave pack that has now been handed out to more than 40 hospitals, along with a book from the charity’s exclusive Olly The Brave series.

Mum of two Charlotte said: “Hatton Park has a reputation for creating a fantastic atmosphere at Halloween, and I didn’t want the children on the estate to miss out due to Covid restrictions, so Lucy and I came up with some safe and fun ideas that we could still do.

“And when another mum, Emily Burgess, suggested we do it in aid of Molly Olly’s Wishes, we thought it was a great idea. Our hope is that many people will support this amazing charity while the children are still able to enjoy themselves this Halloween.”

Rachel Ollerenshaw said: “Halloween on Hatton Park has always been a family time. My children always loved it and often their friends wanted to come to here for Halloween as the residents always seem to do it so well.

“We have lots of happy family memories. Halloween fell not long after Molly, aged four, had her first major operation to remove her kidney. She had a big scar the width of her stomach, her hair was falling out from the chemotherapy, and despite not feeling great, she wanted to join in and would joke with us about trick-or-treat - her trick being that she would scare you with her scar!

Rachel added: “So many residents of Hatton Park have been a great support to the charity. It's a shame that it can’t quite be the same for the children this year, but the ideas that some of the parents have come up with will mean it's still lots of fun. Olly The Brave will be joining in too, so the children will have to see if they can spot him on their trail.”

Trail sheets can be obtained from the Hatton Park Locals Facebook forum or by emailing Lucy Field at: Lucyfield2017@gmail.com

Donations, in lieu of sweets, can be made to Molly Olly’s Wishes at: www.mollyolly.co.uk