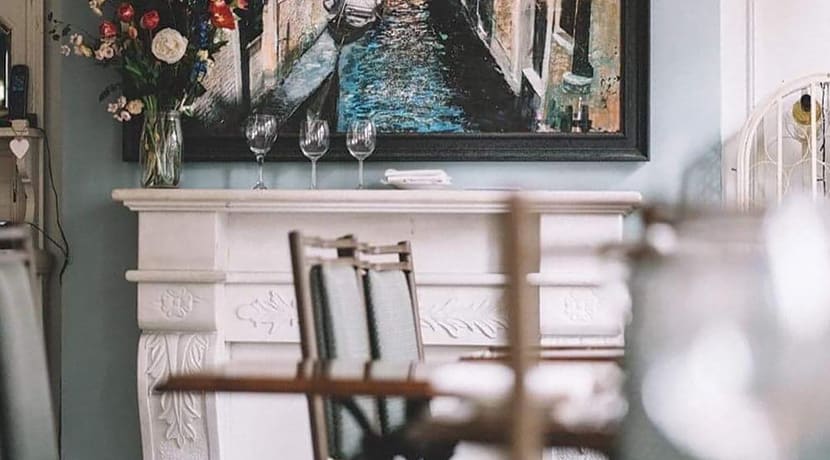 Located on its own cosy corner off the nearby high street, just a stone’s throw from the world-renowned Rugby school, Cafe Vin Cinq is a handsomely furnished bistro. The venue absolutely oozes Parisian charm, from its imposing baby-blue exterior to its gleaming Georgian interiors, complete with signature spiral staircase spread across three adjoining floors, statement chandeliers, ornamental covings, bistro-style chalkboards and impressionist artworks that fill the walls throughout.

There was something altogether enchanting about the place. Stepping from the nearby high street into Café Vin Cinq’s warm embrace resembled meeting an old friend from years gone by. This feeling was only strengthened by the warmth of the welcome we received from the staff, who left no stone (menu, plate or glass!) unturned in ensuring our every need was catered for.

Taking inspiration from classical French cuisine yet drawing on Mediterranean, Moroccan, pan-Asian and Portuguese influences, the Café Vin Cinq menu offered an eclectic choice of dishes, each featuring its own unique twist on a continental classic, from tried-and-tested favourites such as the charcuterie board, caramelised red onion tart and braised beef rib served with rosemary & garlic mash, to seasonal specials such as pan-seared scallops, red pepper, sweet potato and chickpea tagine and lamb canon stuffed with apricots.

And, of course, no Francophile worth their salt could pass up the chance to sample Café Vin Cinq’s signature ‘Chateaubriand fillet steak for two’, served fresh from the grill to order - a firm favourite with locals and, though a tad pricey at £65, the perfect excuse (if excuse were needed) to spoil a loved one!

Opting for a starter of gin-cured loch sea trout with watercress, lime creme fraiche, rhubarb & ginger chutney (on the recommendation of our charismatic waiter), my expectations were quickly satisfied. Beautifully fresh, subtle in flavour with a texture that melted in the mouth, the marriage of cured sea trout and crème fraiche was impeccably judged, as was the picante and slightly sour hit of the rhubarb & ginger chutney served with fresh watercress. Surprising, intriguing, delicious!

A creature of habit, my partner chose the soup du jour, a tad unadventurous given the array of options on offer but by no means disappointing - quite the contrary, in fact. Served with freshly baked bread & butter, this tomato, red pepper and chilli soup exceeded all expectations. Intensely rich in flavour with an undercurrent of sweetness and a healthy kick of fresh chilli, this was an exceptional dish in every sense and a fine example of a classic continental starter delivered with aplomb.

Deliberating long and hard over a glass or two of the excellent Tierra Del Ray Sauvignon Blanc (a refreshing white wine complete with notes of gooseberry), it was almost inevitable that my perusal of the mains would eventually lead me to one of Café Vin Cinq’s signature 12 oz sirloin steaks, served with twice-cooked chips, mushrooms, baby tomatoes and a choice of one of seven sauces. Once again taking the lead from our fantastic waiter - who now felt like a firm friend - I took a punt and strayed from my failsafe choice of ‘peppercorn sauce’, opting instead for the chermoula, a Tunisian mustard relish that exploded with the fresh flavours of coriander, garlic, paprika and peppercorns. The steak, too, was exceptional. Full-bodied in favour, cooked medium-rare over a charcoal grill with an expert eye for presentation, the intense, earthy notes of the chermoula marinade couldn’t have asked for a better partner.

Likewise, my partner’s choice of pan-fried salmon was an utter delight from start to finish. Served with a light flake on a bed of sautéed potatoes (cooked to perfection, I might add), the quality of the fillet was second to none, as was the veloute sauce, a feather-light fusion of butter and flour and champagne. C’est magnifique!

Bringing our evening to a triumphant close, we tucked into a dessert of coconut macaroon with passion fruit parfait. Presented with theatrical flare and glazed with a zesty pomegranate sauce, the sweetness of the meringue contrasted perfectly with the sharpness of the pomegranate. The zesty kick of passion fruit offered an ideal palate cleanser after so indulgent an offering. So too did my partner’s choice of dark chocolate & raspberry tart served with mint syrup and raspberry sorbet, the bitterness of which was offset beautifully by the cooling notes of raspberry sorbet and mint.

Since bursting onto the Warwickshire dining scene in 2010, this pint-sized Parisian bistro has charmed the hearts of punters with its unique ambience, unrivalled service and unmistakable passion for its ingredients. Ten years on and several prestigious award wins later - including a coveted place in the national Trip Advisor Hall of Fame - Rugby’s love affair with Café Vin Cinq shows no sign of abating.

Proudly independent, refreshingly unpretentious and uncommonly inventive in approach, the restaurant’s joie de vivre shines through in every aspect of its delivery - from the humble soup du jour to the show-stopping chateaubriand. Bon Appetit! ***** Katherine Ewing