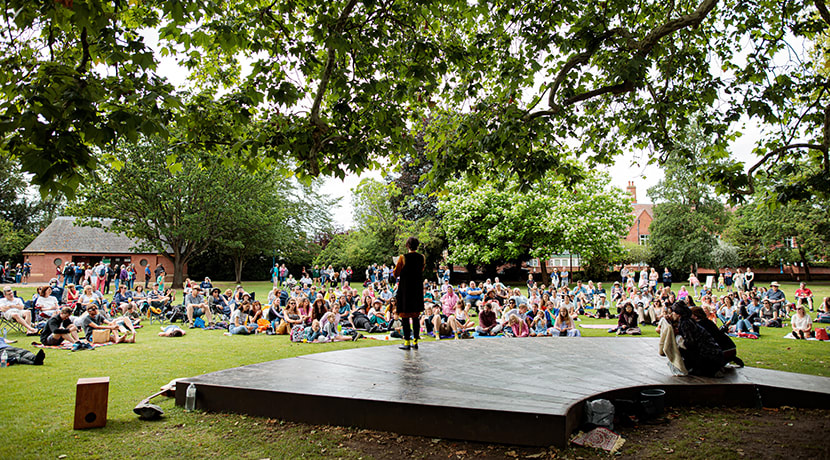 As businesses across Stratford-upon-Avon start to re-open their doors this Summer, the Royal Shakespeare Company announces full details of its new outdoor pop-up Shakespeare performances taking place each weekend throughout August in the Dell Gardens.

The RSC continues to explore every opportunity to open its Stratford buildings as soon as possible and fully intends to re-open the Royal Shakespeare Theatre (RST) with new events and re-scheduled performances of The Winter’s Tale and The Comedy of Errors. Both productions were in rehearsal and due to open in the RST this spring. Further details will be announced soon, but this remains dependent on government advice on social distancing and on whether it is financially viable for the Company to perform to audiences inside our theatres.

RSC Artistic Director, Gregory Doran, said: “Whilst we continue to await news on Stage 5 of the re-opening roadmap and the distribution of the extremely welcome £1.57bn government rescue package for arts and culture, we are delighted to see businesses across the town re-open their doors to locals and visitors from all over the UK. Our buildings may be closed but our commitment to Stratford-upon-Avon is as strong as ever. We are delighted to be working with our current acting company, who would otherwise be performing in The Winter’s Tale and The Comedy of Errors, to deliver this unique scratch programme of socially-distanced, outdoor Shakespeare, and though it may not have lights and costume, and the full bells and whistles of a normal RSC show, is sure to be a welcome treat for anyone who, like me, has been missing live theatre these last few months.”

Helen Peters, Chief Executive of Shakespeare’s England, said: “The past few months have been testing times for many, but the tourism and arts sectors have been hit massively. Stratford-upon-Avon is synonymous with the RSC and vice versa, so whilst the doors have to remain closed, it is fantastic that the RSC have found these innovative ways to engage with their audience and deliver that magic back for the Town as a whole, its residents and the visitors.

With the summer holiday season just starting, the move could not have come at a better time as many people will be looking for events and activities to do closer to home this year.

Stratford-upon-Avon and the surrounding towns are reawakening and now is the time to show people what we have to offer, so it is perfect that the RSC and The Shakespeare Birthplace Trust along with many other attractions are adapting their offer in order to welcome people back.”

The RSC is thrilled to announce a new series of free outdoor performances, sponsored by Darwin Escapes, taking place in the Dell Gardens from Sat 1 August.

Running from Friday to Sunday until the end of the month, Shakespeare Snapshots will take place for 45 minutes at 1pm and 3pm each day.

These high-energy family-friendly performances will be different each week, taking inspiration from well-known Shakespearean texts and themes and featuring actors from the RSC’s postponed productions of The Winter's Tale and The Comedy of Errors.

Featuring a mixture of socially-distanced speeches and scenes from Shakespeare’s best-loved plays, these fun, fast-paced, no-frills performances are the perfect re-introduction to live theatre and are suitable for Shakespeare enthusiasts, newcomers and Stratford day-trippers..

Performances will be first come, first served, with space for up to eight household groups (maximum 6 people each), plus some standing spaces.

Riverside Café and The Rocket

Visitors to Stratford-upon-Avon can also enjoy a daily takeaway service from the RSC’s Riverside Café, which is open from 10am to 4pm.

When in town, visitors can stop off at the Riverside Cafe or ‘Rocket’ ice cream van located at the front of the Royal Shakespeare Theatre. Both will serve a wide range of drinks, ice cream, crisps and cakes. The Riverside Cafe will offer a full range of fair-trade tea and coffee. Alcohol will also be served from 12noon.

Customers are asked that they observe social distancing throughout their visit, using the markings on the pavement and payment is by contactless card only.

Online, the RSC’s 73rd annual Summer School continues with a virtual programme of events which delve deeper into the company’s postponed programme of plays taking place in the Autumn of 2020 and 2021.