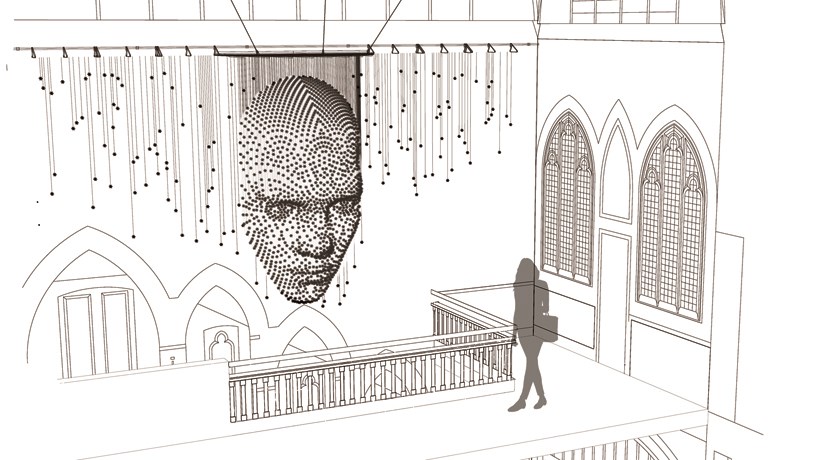 As Stratford prepares to commemorate the 400th anniversary of Shakespeare's death, metalwork artist Steven Follen is undertaking an impressive commission for the RSC's newly restored Swan Wing.
Consisting of more than 2,000 stainless steel stars to be suspended from the ceiling, For All Time is the company's largest ever site-specific art commission, and will be unveiled to the public as part of the Shakespeare celebrations on 23 April.

“The idea was to have something very dramatic that visitors would immediately respond to when they walked into that space,” says RSC curator Andy Horn. “It was quite an open brief: the theme was around ‘time’, which is something that Shakespeare deals with a lot in his plays - particularly the idea of ageing and time being short.”

Time is obviously a key consideration in reflecting on a legacy that spans four centuries. The title of the piece is taken not from Shakespeare, but from a poem by his contemporary, Ben Jonson. Written in tribute to the “Sweet Swan of Avon” following his death in 1616, the poem pronounces that Shakespeare was “not of an age, but for all time” - a claim for which the celebrations and artistic responses continuing today seem to serve as proof.

Nevertheless, Follen's work picks up on several recurring images and ideas in Shakespeare's own writing, too. Stars, both in the literal sense, and in the sense of fate or divine decree, feature prominently in several works, and one of the key quotations that inspired his design is taken from the story of those “star-cross'd lovers”, Romeo and Juliet: “when he shall die, take him and cut him out in little stars, and he shall make the face of heaven so fine, that all the world will be in love with night, and pay no worship to the garish sun.”

The majority of Follen's stars will hang in such a way as to form a huge, three-metre tall face looking down on visitors from the stairwell of the Swan Wing foyer, as if realising the picture painted by Juliet's words.
“We wanted a face that could represent anybody,” says Horn, “so it's not based on any specific person. We chose quite an ambiguous, androgynous face, so it could be male or female.”

According to the website of the London Metropolitan University where Follen teaches, the “three-dimensional artwork will have an ethereal quality to it, reflecting light and moving gently in the air”. Additional stars will hang around the face, roughly mirroring the positions of the constellations on Shakespeare's birthday.

“The components, which are these small, hand-folded stainless steel stars, are being made and connected to the wires they'll hang from off-site,” says Horn, “but the actual piece will be put together here, so what you'll see is this face emerging as the stars are hung. The whole thing has been designed on a grid with quite a complicated CAD programme, and each star is numbered so we'll know exactly what location it needs to be in. Steven will be working systematically from one end to the other, and there will be a couple of assistants helping, but it's time-consuming, so that's the big challenge.”

Proposals from other shortlisted artists were considered, but Follen's ideas, as well as his previous
work, seemed a natural fit for the commission.

“Architecturally it's a very strong space with a gothic style and lots of things going on in it,” Horn explains, “so we needed something that could have a real impact and not get lost in there. I was aware of Steven's work from various other site-specific installations that he'd done, including a couple of projects for the National Trust, and although those were on a smaller scale, I felt that there was real potential there.”

Among the reasons Follen's proposal stood out was its responsiveness to the architecture of the space. Thanks to a £2.8million Heritage Lottery Fund grant, the Swan Wing has been undergoing major restoration work in recent months, and will reopen in two stages over the course of this year.

“Steven's proposal picked up on a lot of the architectural language of the building, particularly in the 1930s section,” says Horn. “So you've got this round stairwell, and the curve of the space is echoed in the curve of the frame and the ceiling, which has a star-shaped pattern on it. In the Scott foyer, there's a lovely folded metal detail, which is something he was very aware of as someone who works with metal. And then again there are little stars - and flower-like patterns in the Victorian fireplace in the original part of the building. As the design developed, it picked up on other elements, too: the frame the stars hang from is in a grid shape, for example, and if you look at the windows in the space, they also have a grid from the leaded work in them, so there are lots of connections all around the hallway it will hang in.”

The reopening of the Swan Wing's ‘public spaces’ - that is, the bar and foyer - has been timed to coincide with the 400th anniversary and the unveiling of Follen's artwork on 23 April. Meanwhile, the Ferguson Room - the old reading room and gallery space - will be opened up in June, complete with a new exhibition called The Play's The Thing. Showcasing an array of treasures from the RSC archive alongside interactive digital exhibits, this hands-on glimpse into the art of theatre-making will allow visitors to try on costumes, get creative as set designers, experience the feeling of standing on stage, and learn how specialist sound effects are produced ‘behind the scenes’.

The completion of ongoing development work and the relaunch of The Other Place will ultimately leave the RSC with more space than ever for projects of this kind, and the potential for future art commissions remains open.

“Obviously we have limited foyer space,” says Horn, “but it's been a really good process, and I'm sure we would be up for it if the opportunity to do something like this arose again.”

For All Time opens along with the Swan Wing public spaces as part of the Shakespeare Day
celebrations on 23 April.