Rugby fish & chip shop recognised for kindness in the community 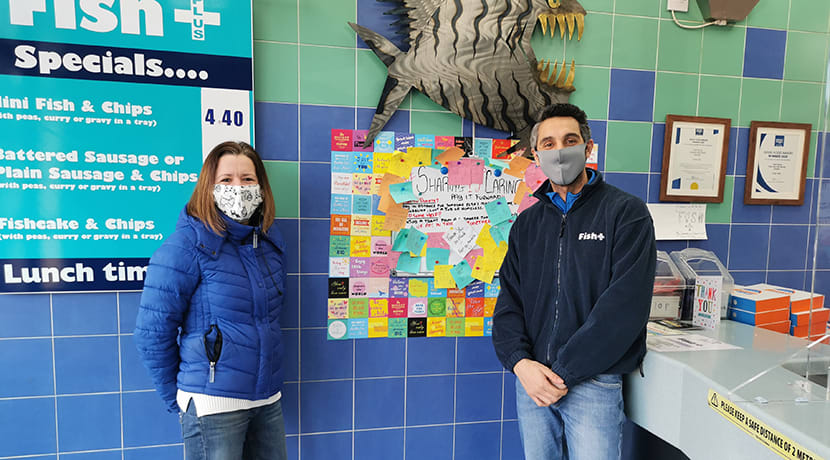 A Rugby fish & chip shop which has supported its entire community throughout the pandemic has had its efforts recognised by being selected as the very first winner of a leading Midlands law firm’s 'kindness campaign'.

Fish Plus has been chosen as the first winner of Leamington-based Wright Hassall’s 175 Acts Of Kindness initiative for 2021.

Andreas Kattou, who owns Fish Plus with his mother, Angela, has supported a number of charities throughout his career, so instantly knew he needed to help those in his local community when the Covid-19 pandemic began.

When Fish Plus was forced to close its doors for the first lockdown, Andreas - and his then three-year-old daughter - bagged up 1,000 kilos of potatoes to give away to those in need.

Then, when the fish and chip shop was able to reopen under government guidelines, it donated free meals to children, made contributions to Rugby foodbank and even set up a stall in the town centre, offering free battered pigs-in-blankets and chips to the whole community in December.

Andreas has now launched a Sharing Is Caring scheme, giving customers the opportunity to pay for extra meals, which are then given to those in need, to encourage even more people to support their community.

The 175 Acts Of Kindness initiative was launched to celebrate Wright Hassall’s 175th anniversary and asks members of the public to nominate members of the community who have gone 'above and beyond' to support others.

Each month employees from the firm then select a winner, who receives £175 to donate to a charity of their choice.

Andreas said: “It was such a nice surprise to be selected as this month’s Acts Of Kindness winner - it’s something I never expected. It’s even better that the prize is a charity donation, which I hope to give to Rugby foodbank, which provides such a vital service to the town.

“I’ve always worked hard to support others. I began supporting charities around 13 years ago, after my cousin died of a heart attack, and I started raising money in his honour to give something back to the charities that supported him.

“Then, a few years ago, we lost my nephew at just one month old, so again I wanted to raise money to give something back.

“When the pandemic began, I didn’t think twice about supporting my local community. You don’t always realise just how many people need an extra bit of help.

“I know people who have lost really good jobs because of the pandemic, and those who used to regularly donate to local foodbanks now rely on them to survive.

“Sharing Is Caring is the latest scheme we’ve launched, and we’ve already had a lot of support. It gives customers the chance to pay for extra meals, which those in need can choose from to feed themselves and their family.

“We have some fantastic customers, so I’m sure it’s something we’ll see grow even further.”

Michelle Hughes, of Wright Hassall, said: “Andreas and the whole team at Fish Plus have provided an incredible amount of support to their local community during what is an extremely difficult time for so many. They are a real inspiration and very worthy winners of our Acts Of Kindness initiative.

“It’s wonderful to hear that the charity donation will be given to a local good cause which also helps people right across the Rugby community.”