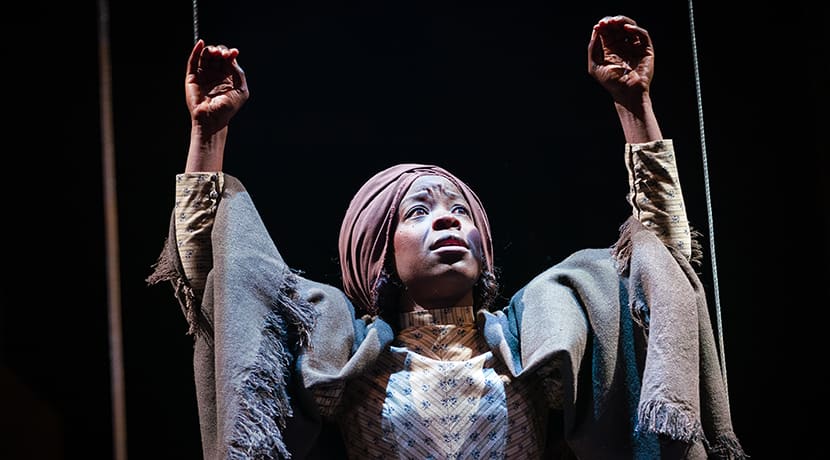 The original stage production, which premiered in the Swan Theatre in 2019, ended unexpectedly earlier this year due to the Covid-19 pandemic and the temporary closure of the Royal Shakespeare Company stages in March.

The recording re-unites the original cast of The Whip to present a new audio dramatisation of the highly acclaimed drama. The play explores the human cost of the multi-billion slavery compensation bill, which contained provision for the financial compensation of slave owners – rather than of slaves themselves - by the British taxpayer, for the loss of their “property” following the abolition of the slave trade in 1833.

The audio recording includes Sound Design by Claire Windsor with music by Akintayo Akinbode and will premiere on the Royal Shakespeare Company You Tube channel on Thursday 29 October at 7pm.

This will be accompanied by a one-off play reading of Tom Morton Smith’s biographical epic Oppenheimer which is commissioned by Angus Jackson and re-unites the original cast of the Royal Shakespeare Company’s sell-out 2014/2015 production.

Oppenheimer first premiered in the Swan Theatre, Stratford-upon-Avon in 2014/15 before transferring to The Vaudeville Theatre, London in 2016 for a limited run.

Erica Whyman, RSC Deputy Artistic Director said: “I am delighted to be working again with Juliet Gilkes Romero and Kimberley Sykes to bring this astonishingly resonant piece of political drama to audiences. I can think of few plays that speak so directly to the moment as ‘The Whip’ does, both in its forensic examination of Britain’s slave-owning past and how we, as individuals, attempt to navigate and confront that historical legacy, in all of its complexity and contradictions.

“The epic nature of the subject matter and the broad sweep of narrative that Juliet Gilkes-Romero’s The Whip and Tom Moreton-Smith’s Oppenheimer deal with is something we have always encouraged in our commissioned new work. Telling untold stories, exploring issues of power, responsibility and personal identity through the lens of a group of remarkable human beings, navigating their own place within a changing world, is at the very heart of what Shakespeare wrote about. By continuing our commitment to new writing, we hope to channel that same enquiring spirit through some of the most promising voices of today”.

Commenting on The Whip, Playwright Juliet Gilkes Romero said: “Since performances of The Whip at the RSC were brought to a premature end in March this year due to the coronavirus pandemic, the legacy of Britain’s involvement in the transatlantic slave trade has come into sharper focus. Questions are rightfully being asked about the extent of the trade and its impact on our society. Indeed, is it right that Britons who became fantastically rich from the proceeds of this brutal oppression, even those who became noted philanthropists, should be revered in unquestioned terms?

My mission as a playwright is always to unravel what has lain untold and buried for political expediency. The 1833 Slavery Abolition Act allegedly freed 800,000 Caribbean slaves. What is less well known is that the same act contained a provision for the financial compensation of the owners of those slaves, by the British taxpayer, and that the slaves would be legally forced to work as unpaid apprentices for seven further years. The money borrowed to achieve this ‘bailout’ was finally paid off by us, the taxpayer, in 2015; equivalent to some 20 billion pounds today. The facts of this history deserve to be re-examined and future generations have the right to debate how Britain’s collective colonial memory, or lack of it, shapes our current cultural reality. We are staging this recording to be part of this important conversation.”

Commenting on the release of Oppenheimer, Director Angus Jackson added: “Tom Moreton Smith called me and pointed out that this year marked the 75th anniversary of Hiroshima. It seemed like the perfect moment to revisit the play. From there, I set about contacting the original cast personally and everyone said yes straight away. It was a supercharged response. Oppenheimer is the sort of play that you savour. It’s a beautifully written piece and, in a time where there isn’t a great deal of theatre available, I’m delighted to give audiences the opportunity to enjoy this compelling and important piece of work, whether re-visiting the play for a second or third time or encountering it afresh for the first time.”

1939: fascism spreads across Europe, Franco marches on Barcelona and two German chemists discover the processes of atomic fission. In Berkeley, California, theoretical physicists recognise the horrendous potential of this new science: a weapon that draws its power from the very building blocks of the universe. The ambitious and charismatic J Robert Oppenheimer finds himself uniquely placed to spearhead the largest scientific undertaking in human history.

Determined to cast off his radical past and struggling with tempestuous relationships with his colleagues, wife and mistress, Oppenheimer finds himself thrust into a position of power, racing to create a weapon so devastating that it would bring about an end not just to the Second World War, but to all war.

Directed by Angus Jackson (King Lear, Chichester Festival Theatre and Brooklyn Academy of Music) with John Heffernan taking the role of Oppenheimer, Tom Morton-Smith's play takes us into the heart of the Manhattan Project to reveal the personal cost of making history.

The original production was directed by Angus Jackson with design by Robert Innes Hopkins, Lighting Design by Paul Anderson, Music by Grant Olding, Sound by Christopher Shutt and Movement by Scott Ambler.

An audio dramatisation of the play by Juliet Gilkes Romero

As the 19th Century dawns, politicians of all political persuasions gather in London to abolish the slave trade once and for all.

But will the price of freedom turn out to be a multi-billion pound pay off to the slave owners, even though such a bailout could drive the country into economic and political ruin?

As morality and corruption clash in a world of men thirsty for power, two women forge an unlikely union and fight their way to the seat of political influence, challenging Members of Parliament who dare deny them their say.

Juliet Gilkes Romero is a playwright and journalist. She has reported for the BBC from countries including Ethiopia, Haiti and the Dominican Republic. Her most recent work includes the Bafta-nominated TV series Soon Gone: A Windrush Chronicle (BBC4), co-produced with Sir Lenny Henry’s Douglas Road Productions. Previously for the RSC she co-created Day of the Living, which played at The Other Place as part of the RSC’s Mischief Festival in 2018.  She is the recipient of the Roland Rees Bursary 2019 named in honour of the co-founder of the Alfred Fagon Award and her play At The Gates of Gaza won the Writers' Guild Best Play Award in 2009.

The original production was directed by Kimberley Sykes, with Set and Lighting Design by Ciaran Bagnall, Costume by Nicky Shaw, Music by Akintayo Akinbode, Sound by Claire Windsor, Movement by Coral Messam and Fights by Kev McCurdy.