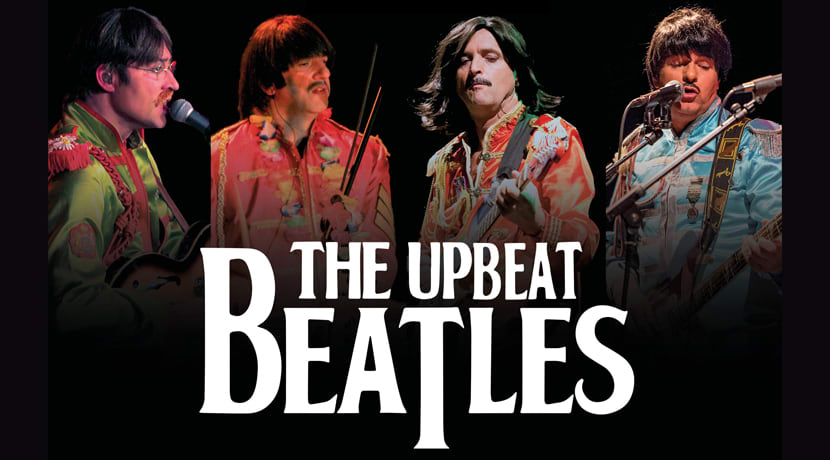 This show will have you tapping your feet from the opening bars - dancing in the aisle, and screaming like you did in 63 by the end. With songs that changed a generation.

From "She Loves You" to "I am the Walrus" and beyond!

From the depths of Liverpool’s Cavern Club, to the Roof Top of The Apple Building, the Upbeat Beatles will take you on a journey that is the story of The Beatles through their songs.

The Upbeat Beatles are four supremely talented guys - great powerhouse vocals and close harmonies, pumped out with a driving backbeat to give you a night you’ll never forget.

The Upbeat Beatles are in constant demand and their hard earned reputation for authenticity and attention to detail has taken them around the world, playing to ecstatic audiences. These have included The Jordanian Royal Family and the Hollywood film actor Michael Douglas.

The Beatles were the band that shook the world - Let the Upbeat Beatles shake your night!
"The fab-est four around today, THE UPBEAT BEATLES are the nearest you'll ever get to the real thing!"

"It was a great night, if you go to see Love by Cirque du Soleil or Let It Be in the West End, you may see flashier sets but what you will not get is the soul of the band, these guys recreate that scally humour as well as the fantastic material brilliantly" BRFM.

"Jack is a dynamic and uncompromising singer/songwriter hailing from Walsall in the West Midlands. He has spent years honing his writing, playing and stagecraft to a point where people take notice wherever he performs. Jack’s songs breathe new life into the age old concerns of youth, offering a refreshing new slant on love and angst in a modern world through astute, insightful and often profound lyrics belying his years"