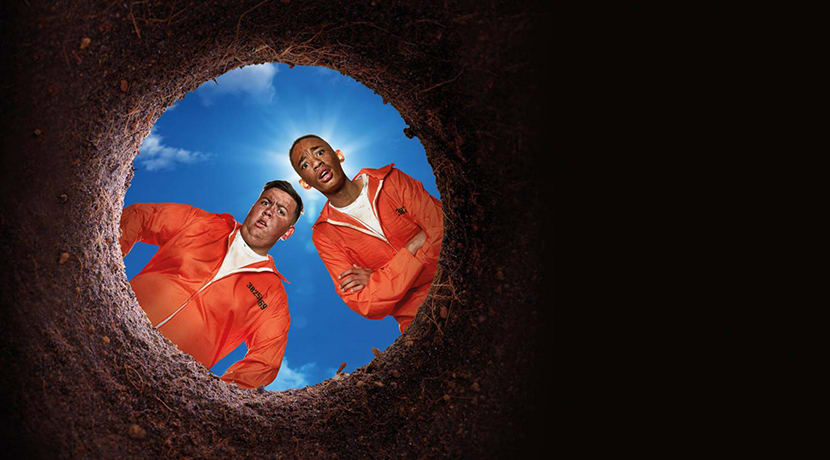 Creative new stage show based on the multi-award-winning novel and Hollywood blockbuster of the same name.

Stanley Yelnats can’t catch a break. Born into a family cursed with bad luck, it comes as no surprise when he finds himself accused of a crime he didn’t commit.

Sent to a labour camp as punishment, he is tasked with digging one hole, five foot wide by five foot deep, every day. He’s told it is to build ‘character’. But the tyrannical Warden is definitely hiding something. How will Stanley and his fellow inmates deal with her demands, her two cronies, plus the fearsome rattlesnakes and yellow-spotted lizards? And will Stanley and his new friends unearth what’s really going on?

Louis Sachar’s 1998 young-adult novel, Holes, is a staple of the national curriculum and much loved by children and adults alike. Nottingham Playhouse’s new stage version is coming to a theatre near you...

“The play, like Louis Sachar’s award-winning novel, is about a teenager, Stanley Yelnats, who gets falsely accused of stealing an old pair of sneakers,” explains Adam Penford, Artistic Director of Nottingham Playhouse, the theatre behind a brand new stage adaptation of the book. “Stanley is sent to Camp Green Lake, which certainly isn’t green and no longer has a lake. It’s a dried-up lake-bed and now very much like a desert. Every day he has to dig a hole, five foot deep and five foot wide, as a reforming character-building exercise. Stanley quickly discovers that the warden who runs the camp is hunting for something, so he starts investigating. Holes is an epic mystery adventure story!

“The novel was written in the late ’90s and has been studied by schools ever since. I think people really engage with Holes for a number of reasons. Firstly, as Louis Sachar himself said, everyone as a child has an obsession with digging a huge hole to see how far they can get into the earth, maybe even out the other side! So just that starting premise is one that grabs people’s imaginations.

“Secondly, it’s a really gripping story, the book is certainly a page-turner - and on stage you really can’t wait to see how it moves step-by-step through the adventure. By final-curtain, all of the loose ends of the mystery wrap up neatly into a really satisfying conclusion.

“Then, the other big appeal is the characters. Everyone is drawn to them; this motley crew of very different, characterful, flawed and real people.

“Finally, the reason it works so well on the page - and this is something we’ve tried to translate onto the stage - is that it has a consistent sense of danger and suspense. Sachar doesn’t patronise the reader. These boys are being forced to do manual labour in the baking heat, and the adults who are supposed to be looking after them are ruthless and only out for themselves. Even the environment itself and the creatures surrounding them are deadly. There’s a real sense of jeopardy, of life and death, and I think that’s something children respond to because they’re very aware they’re not being talked down to.

“Underneath it all, Holes really is a story of friendship. Stanley makes friends with Zero, who’s the boy in the camp who never speaks. Everyone else presumes he’s either mute or stupid, but he turns out to probably be the brightest of them all. Watching their friendship develop is really beautiful. It’s also about the love between Stanley and his parents.

“The other underlying narrative is this question of destiny, and whether you have control over the way your life turns out or not. What’s very clever about it is that Louis doesn’t really answer that question by the end, so while the storyline itself is tied up neatly, it still leaves a lot of questions for the reader. Stanley is kind of an anti-hero in the beginning; things happen to him and he blames bad luck and his ‘family curse’. Then, as the play goes on, he starts to take control of his own destiny and becomes much more empowered. In the end, Sachar does almost hint that there are some things out of our control and there’s definitely some sort of magic in the world we live in.”

Sachar adapted Holes for the stage himself, but the Nottingham Playhouse production has been a long time in the making - as Adam explains: “I read the novel quite a few years ago from a list of 100 that everyone should read in their lifetime. Of course, I got through about three, but one I did read was Holes. So I read it as an adult rather than a child and fell in love with it very quickly. I thought how much of an amazing play it would make. When I looked into it, I saw that Sachar had already adapted it himself, but at that point it had only ever been staged in America. I managed to get hold of his agent in New York, but one of the big questions was how to actually stage this: how can you dig holes on stage? We did a series of several workshops over 10 years ago, followed by a small version at the Wimbledon Theatre Studio, and that went down really well. I was trying to sell Holes as an idea to theatres and there was a lot of interest. But I never quite managed to land it as a full-scale production. So of course, when I was appointed artistic director at Nottingham Playhouse, I finally got to programme Holes myself! We’ve been working on it for over 10 years, and the version we put on at Nottingham was so successful that Fiery Angel, our producers, picked it up and decided to tour the Playhouse production around the UK.”

The popular film adaptation of Holes, starring Shia LeBeouf and Sigourney Weaver, was released back in 2003. What can fans expect from the stage version?

“Lots of people are huge fans of that film, or have only seen the film and never read the book. There’s a lot to admire about the movie, especially the cast, but theatre definitely requires the audience to use their imagination a little more. The geographical location is one of the most important parts of the story because it’s so evocative, but we can’t create that naturalistically on stage. We have to use signifiers in the set, props and costume to transport people to the desert location or to the top of the mountain, God’s Thumb, and back in time to the 1890s, when Green Lake was a flourishing community with an actual lake. The power of imagination is the power of theatre. That’s the major difference.

“Also, there are quite a large number of characters, so in our production you’ll see an actor taking on five, six, seven or more different roles. There’s a huge pleasure in seeing the same person transform from a 40-year-old camp warden to an 85-year-old Latvian pig breeder! I think asking the audience to invest in this journey and take a very active part in creating it very much fits Holes anyway. Sachar’s story is very much about believing in yourself, others and the world - and we ask our audience to believe in the production.”

Other creatives who’ve worked on the show include Simon Kelly, who designed for the acclaimed adaptation of Noughts And Crosses. The puppetry, meanwhile, is the brainchild of War Horse’s Matthew Forbes.

“Undoubtedly our creative team is why we were so successful in Nottingham. Family shows do often require a large creative team, to use as many different theatrical elements as possible in a collaborative way to create an engaging story. So we knew there’d have to be puppetry because the dangerous yellow-spotted lizard is a huge part of Holes. All the characters are terrified of the lizard, which can kill with a single bite, so the audience really needs to believe in that or the stakes of the story fall short. We needed a really good puppetry designer and director to achieve that, so Matt was the absolutely perfect person.

Likewise, with the set design from Simon, the story takes place in so many different locations and so many different timelines that a really skilled designer was essential. In the play, there’s 1860s Latvia, Greenlake in the 1890s and Stanley’s present day, which is mid-’90s for us. We needed a very fluid set design that could cross between the different timelines in an imaginative way. It’s a real  collaborative team effort. Holes also has plenty of music and choreography working alongside the other disciplines.”

Adam is most proud of the intense emotional response of audiences to the Nottingham Playhouse production: “The audience really buy into the world we’ve created on stage and really care about our characters. For example, when Stanley and Zero are under threat at the end, the audience are gasping out loud and shouting out against the baddie - and are even moved to tears by the positive ending. So even though this is a very stripped-back production that asks the audience to really work hard with their imaginations, it feels like we’ve really been able to get to the heart of Sachar’s story, to the point where they feel like they’re actually in the middle of it themselves.”

Adam admits that he’s envious of people who have yet to discover the delights of Holes: “If you know the book or the film, then our production is a real joy to relive. If you’re new to the story, then you’re in a really privileged position because it’s a truly gripping tale, with so many twists and turns. I’m really envious of anyone encountering this story for the first time!”