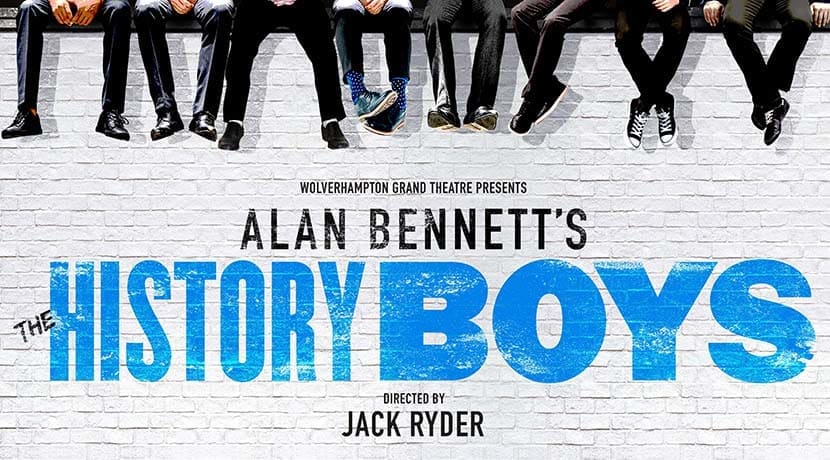 An unruly bunch of bright, funny sixth-form boys in pursuit of sex, sport and a place at university. A maverick English teacher at odds with the young and shrewd supply teacher and a headmaster obsessed with results… In Alan Bennett’s classic play, staff room rivalry and the anarchy of adolescence provoke insistent questions about history and how you teach it; about education and its purpose.

The History Boys will be directed by Jack Ryder, known for his acting roles in EastEnders and Holby City, he most recently directed Tim Firth’s The Band, which became the fastest selling tour of all time before transferring to Theatre Royal Haymarket.

It’s the 1980s, and an unruly bunch of bright and funny sixth-form boys are in pursuit of sex, sporting achievement and a place at university…

Widely acknowledged to be one of the UK’s finest modern-day playwrights, Alan Bennett is perhaps best known for the frank yet compassionate way in which he unveils his characters’ many layers, exposing both their shortcomings and triumphs for his audience to see. His plays are jam-packed with sharp wit, devastating moments of raw emotion and incomparable humanity.

The History Boys is no exception.

“It’s all about considering what the point of education is,” says Ian Redford, who stars in the new production. “What are schools for? Is school about passing examinations or is it about actually learning stuff? And then is that learning focused on how to be a human being, or finding out about how the world around you works - or both? Education is always on people’s minds and everyone has an opinion about it. I think the further away an individual gets from having been in education, the more strident their opinions become. I was reading an article years ago about parents running around in Starbucks bragging about their children’s material possessions and arbitrary achievements. But it’s not about that. It’s about whether kids are growing up into happy human beings, not just being raised to achieve certain things, like fulfilling a school’s desired number of pupils going to Oxford and Cambridge, which is certainly part of the story in The History Boys. Education is the nub of the way society works and can become a topic in which people explore what it means to be human, but almost by accident.”

“I had a particularly extraordinary teacher at school. I wasn’t academic and was pretty lazy too. I really wasn’t interested in school, but I was in plays, theatre and acting. This wonderful teacher - who was a History teacher, funnily enough - taught me how to live through my passions. Reading a book or seeing a play is like going on a magic-carpet ride where you go into this whole different world.

“We also have this desperate focus on achievement; who’s got a better car, a nicer phone, whatever. The History Boys is about that, and it’s also about being human and the power of language.”

The play also delves into the subject of male relationships...

“A few of the characters, both the boys and the teachers, are homosexual or are pretty open when it comes to what they’re willing to try. Putting aside sex, what Alan Bennett discusses is male love of all kinds - a sense of caring for another male. There are all these pressures about what a man should be, how to be an alpha male and what masculinity means. Women obviously have their own pressures, but in the 1980s, men weren’t supposed to hug, touch and be caring towards one another in the same way as women were. It’s also about adolescence and how to navigate that. It’s about the value of teachers as guides - and not just academically either; not just to get you through the exam and be done with you.”

“Hector is married and described as a latent homosexual. He’s a teacher who’s been around a long time and is getting to the latter stage of his career. He survives through humour, definitely knows the limits of his influence - as most teachers do - but has a burning passion which has kept him going throughout his years in teaching. The beauty of language is particularly important for Hector. He has a beautiful relationship with all of the boys, in the sense that he’s a sort of parental figure, but also knows when to give them a cuffing. Hector is forced to share a class with Irwin - a younger teacher who’s come in to shake things up. Irwin’s idea is not to teach the subject as it is, but to embellish and subvert it in a way that makes it more appealing to the students. It’s almost as if he’s flogging stuff! So Hector and Irwin’s relationship is certainly a little confrontational.”

How does Ian think The History Boys compares to Bennett’s other plays?

“In a way I think this play is his most political, although he doesn’t really come up with a specific leaning towards one side or the other. He just throws up into the air all the questions for the audience to consider for themselves. As he’s got older, Bennett has become more political, particularly when it comes to the arts. I suppose everything is political in the end, but The History Boys is certainly more overtly so.

“And it’s so funny too. The humour and wit in it is so funny; “History is just one f***ing thing after another”! It’s truly brilliant. I can’t think of any other playwright who does the combination of politics, comedy and human relationships so well. I’d say he does it in a very understated English way. There’s a gentleness and a sardonic humour around his work. He’s the most extraordinary writer.”

Lee Comley, taking on the role of Hector’s rival, Irwin, and Victoria Carling, playing the only female teacher, Mrs Lintott, also have plenty of praise for Bennett and The History Boys.

“This is a play that everyone can relate to,” says Lee. “That feeling of moving from being a late teen into an adult is a strange time for all of us. I think everyone will leave at the end of the show having had a great time, but also holding onto those really important parts of the play. What I like the most, though, is that the boys are very open to their sexuality being fluid. To have that viewpoint in the ’80s is quite unusual. I think what’s so striking about Bennett is how he just lays everything out there, just as it is.”

Victoria is equally complimentary about The History Boys: “After I’d read the script, I tried to describe to my husband what sort of humour Bennett injected into his plays, but it’s really hard to do that. It’s almost like it’s so subtle that you don’t quite know why you’ve laughed, but you do anyway. The comedy in his plays is so clever, but certainly not in an inaccessible way. Bennett is nothing to be afraid of!

“The History Boys never struck me as a play I ever wanted to see, but now having read it, my thinking has been completely altered. It’s moving, funny and thought-provoking. I would compare it to a heartfelt chamber piece. It’s not a great, showy symphony - all fire and bangs - but it’s something you will keep thinking about afterwards.”

The History Boys shows at Wolverhampton Grand Theatre from Friday 7 to Saturday 22 February.

The enduring quality of The History Boys, Alan Bennett’s compelling drama of a group of grammar school boys studying for the Oxford and Cambridge university entrance examinations, was reinforced with the opening of Wolverhampton Grand Theatre’s revival of the play on Tuesday night.

Directed by former EastEnders and Archers actor, Jack Ryder, The History Boys is the story of two teachers with contrasting approaches to tutoring eight boys as they prepare to enter university.

Hector (Ian Redford), is a popular, eccentric and somewhat idealistic teacher of English, who is steeped in literature and believes in the value of education for its own sake, rather than a means to an academic end. Irwin (Lee Comley), on the other hand, is a supply teacher who has been hired by headmaster, played by former Hi-de-Hi star Jeffrey Holland, to coach the boys for their entrance examination.

In a series of fast-paced scenes, Bennett’s skill with language is a delight for anyone with even the vaguest interest in literature and pop culture, with allusions to Philip Larkin, W.H. Auden, Thomas Hardy, Rupert Brooke and Wilfred Owen, as well as the classic movies Brief Encounter and Now, Voyager, and in this production, clips from both films are screened as the theatre fills up before the start of the play.

As the audience is introduced to the teaching methods of both tutors, the purpose of education is challenged by Bennett’s script. Is Hector’s belief that, “Examinations are the enemy of education,” a valid comment, or is Irwin’s focus on ‘coaching’ the boys for their examination the most effective technique?

At one point, Hector is offended when Irwin observes that his tendency to encourage the students to learn and recite quotations are merely ‘gobbets,’ yet Bennett’s use of snippets of information in the script offer some of the most entertaining lines in the play.

The set is simple, but extremely effective, allowing the focus to rest on the stunning performances by every member of the cast, though Redford’s depiction of Hector, offering a steady hand not only on the play, but also on some of the boys in his charge.

Of the pupils, Thomas Grant as Posner deserves special praise for his engaging interpretation of one of the play’s central characters, especially when he re-enacts a Celia Johnson scene from Brief Encounter or bursts into songs such as ‘Bewitched.’

Posner is one of four characters I the play that examines their sexuality, and it is an incident involving Hector and one of the boys that provides a central pillar of the plot all the way through to the play’s denouement.

Mrs Linott (Victoria Carling) is the only female character in the play, and she offers a fresh perspective in this male-dominated establishment. Commenting on Hector’s teaching methods, she describes them as, “Unpredictable and unquantifiable, and in the current educational climate, that is no use,” an opinion that likely struck a chord with teachers in the audience.

Music is used very effectively during transitions between scenes, with snatches from 1980s classics by The Jam, Madness, Soft Cell and Dexys Midnight Runners. To accompany the sounds, the cast filmed scenes at a local secondary school, ensuring that the plot moved on seamlessly.

Alan Bennett is often described as a ‘National Treasure,’ and it is productions such as this of The History Boys that make you realise how perceptive and witty, he has been for many decades, whether that has been in print, on television, the big screen or on stage.

Whether you are attracted by Bennett’s rich script or simply want to catch up with a post-yellow coated Spike Dixon, The History Boys is an entertaining production that will also provide plenty of food for thought.