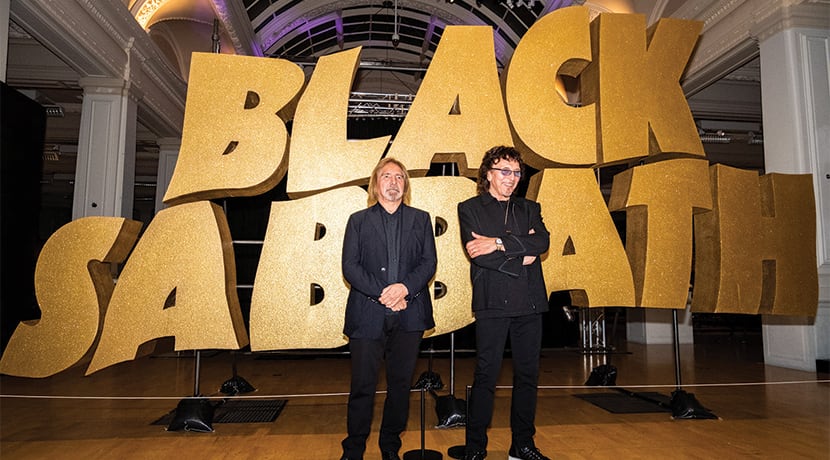 With Black Sabbath having recently brought down the curtain on their spectacular 50-year career, a new exhibition in Birmingham is paying homage to the four working-class lads from Aston. Lauren Foster spoke to band members Tony Iommi and Geezer Butler to find out more about the godfathers of Heavy Metal...

Fifty-one years ago in the Aston district of Birmingham, Tony Iommi, Geezer Butler, Ozzy Osbourne and Bill Ward came together to play music. The band they formed pioneered a new kind of sound called Heavy Metal - and the rest is history...

Now a new exhibition is paying homage to one of Birmingham’s most famous bands.

Created by Home Of Metal in collaboration with the boys themselves and designer Morag Myerscough, Black Sabbath - 50 Years is currently on display at Birmingham Museum & Art Gallery.

“It just felt natural,” says Geezer Butler, Sabbath’s bass player and main lyricist, in explaining how the band invented Heavy Metal. “To other people it may have felt like a new genre of music, but to us it just felt like an extension of the bands that we liked, like Hendrix, Cream and Robert Johnson. We just made songs for ourselves. We didn’t think ‘this is rock’ or ‘this is metal’ or anything like that; it was just music to us.”

Black Sabbath - 50 Years brings together never-before-seen iconic artefacts and treasured personal items sourced directly from the band members. Highlights include Ozzy Osbourne’s crucifix, Tony Iommi’s home studio and outfits worn on stage at some of the band’s most infamous shows.

These are displayed alongside rare memorabilia, portraits and collections from Sabbath’s devoted global fanbase - including a recreation of super-fan Stephen Knowles’ living room, which is a homage to the foursome.

In addition, there’s a display of over 3,000 portraits of Black Sabbath fans from across the world, showcasing the incredible breadth and diversity of the band’s loyal following.

“It really does make you feel nostalgic,” says guitarist Tony Iommi. “Some of this stuff I haven’t seen for years and years, and some of the stuff I’ve never seen before. It’s great! You wonder what’s happened to the last 50 years. It really is amazing.”

The Black Sabbath story began when the four lads were looking to use music as an escape from a life of factory work.

“The main reason we all got together is because we were literally two streets away from each other,” explains Geezer. “None of us had cars or bikes or anything, but we were able to walk to each other’s houses. And there was a community centre that we could use for free every morning from 9am to 11am.”

“We also used to see each other playing at a club in Birmingham called Penthouse,” Tony recalls. “There were three floors of music and it used to go on late. Geezer was in a band called Rare Breed, and I was there with another band, Filth, so we all got to know each other. It worked out well!”

In the early days, Sabbath were met with an abundance of bad press and criticism from music journalists.
“When we first started, we couldn’t really get work here,” Tony reveals. “There were two places that we could play - our houses and a place called The Pokey Hole -  and it really was a pokey hole! We had to go to Europe  before we could break ground. We ended up going to Germany and Switzerland and building up small pockets of fans. We were playing to three or four people sometimes; it was unbelievable. Eventually we built a following in all these places. That’s how we had to do it. We then came back to England when the first album was in the charts. We had all these gigs that we were getting £10 a night for. It just went from there.”

So how does it feel to have inspired an entire genre of music?

“It’s absolutely amazing,” says Geezer. “We were put down by the press for so long, but we didn’t care about that because we always sold out gigs in America. Then bands like Anthrax covered Sabbath Bloody Sabbath and Metallica cited us as a major influence, and we were sort of going like, ‘What?!’ Then this whole slew of bands came out citing us as their main influence. We didn’t really think about it until that happened.”

Despite growing up in a conservative and religion-dominated culture, Geezer’s lyrics draw heavily on his fascination with the black arts.

“I was brought up as a strict Catholic - we used to go to mass every Sunday. This one time, we had these missionaries come from Africa, and this one guy had a big, long, black cloak on and scared the hell out of me. He was saying, ‘You’re all going to go to hell, you’re all going to die’, and I gathered that that wasn’t what religion was supposed to be about. I’d heard about Satan and thought I’d just go and see what he was saying. I didn’t practise anything. I used to like science fiction and Dennis Wheatley kind of books; they inspired me lyrically. The only Sabbath songs that were actually about Satan were ones that Ozzy wrote, and they were a warning against Satan. It was becoming a big thing back in the ’60s - an antidote to the flower power thing.”

Even after 50 years of stardom, both Tony and Geezer remain impressively humble.

“We’re just normal people,” says Tony. “We’ve had bands on with us and they were ‘real stars’ - and these were bands that were supporting us! We’ve never been like that; we’ve never been that way. We’re just regular people, and I’m glad we’re like that. When you see those sorts of people, people who have no time for you, I don’t believe in all that.”

Geezer is very much in agreement: “I think when you’ve had such a working-class background and been brought up working class, you always think, ‘This can’t last, we’re eventually going to have to go back to our working-class origins’. It keeps us down to earth. Especially with a Birmingham accent!”

Their final tour, appropriately titled The End, saw them play 81 concerts in 25 different countries. They also recently received a Lifetime Achievement Award at the Grammys.

So when did it hit them that it really was ‘The End’ for Black Sabbath?

“For me,” says Geezer, “it was probably when I arrived back in LA. After we did that last show in Birmingham, we went into a studio and did some bonus tracks to show people how we rehearsed and stuff like that, so I still felt like we were on tour. I got back to LA and probably about a month later it was like, ‘Oh, bloody hell, that’s it!’”

Geezer also plays in a band called Deadline Ritual. “Yeah, it’s just something to do - gets me out of the house. There’s only so much Bargain Hunt you can watch!”

Although the life of the band has been very well documented over the years, is there anything that we don’t know about Black Sabbath that the pair are willing to tell us?

Whilst Geezer reveals that they’re all vegans, Tony jokingly and unsurprisingly replies: “Oh there’s a lot! So many things have happened over the 50 years. We could go on and on about things that nobody else would know, but we’re not going to...”