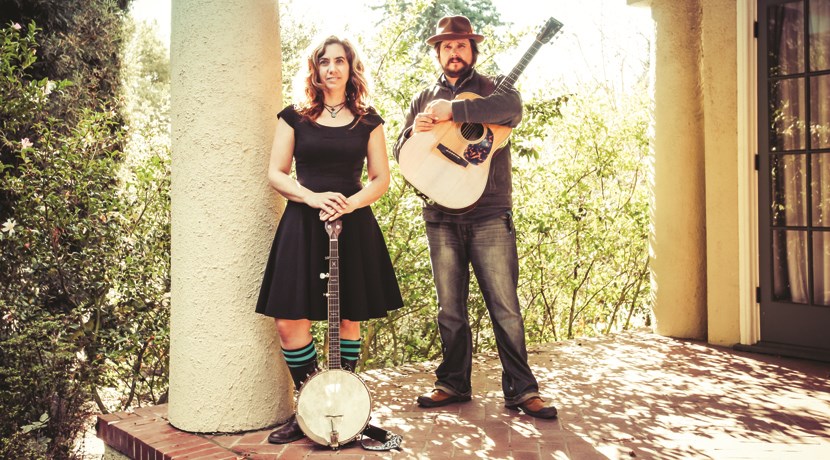 It's been 12 years since Canadian folk star Cara Luft parted ways with The Wailin Jennys and embarked upon a major solo chapter in her career. Two acclaimed solo albums and a whole lot of touring later, however, and Luft has finally found herself back in a band with a new and somewhat unexpected collaborator.

We spoke to her about how a chance encounter with fellow Manitoban JD Edwards inspired their joint venture, The Small Glories, which is coming to The Hive this month.

“There's a venue in Winnipeg called the West End Cultural Centre,” Cara explains, “and about three months before its 25th anniversary, the artistic director started asking Manitoba artists who’d played there over the years to come and play at an event. All of us were partnered with someone we'd never worked with before, with the goal of learning two songs by other Manitoba artists. JD and I hadn't even heard each other sing before, so it was kind of crazy, but we just immediately realised how well our voices worked together. I think there were about 35 artists involved in the project, but we kind of stole the show because we were such a natural fit.”

Of the two songs that they prepared for the anniversary gig, just one makes it onto the duo's debut album, Wondrous Traveler, released in February this year. The track is a delicate, dreamy, atmospheric take on 1000 Stars, written by Winnipeg's Greg MacPherson.

“Greg is more of a kind of indie-rock guy, and he does it in quite a wacky and interesting way - about halfway through, he completely changes the time signature, and it doesn't have any harmony or acoustic guitar on it. Our version is obviously quite different, but I think he was really tickled pink that we'd tackled it! The second one was a Neil Young song called Don't Let It Bring You Down, which JD had previously sung with his rock band. When we first did it, it didn't gel as easily as 1000 Stars, partly because it was in both of our lower registers. We've since revisited it and swapped parts, so now I sing the melody and JD sings the harmony, and we've upped it a little bit. It sounds killer now, and we'd really like to record it for the next record.”

There's little doubt that the chance to spread her wings over the last few years has made Luft a much more confident musician. The contrast between the artistic freedom she's enjoyed of late and her previous experiences with the Jennys has taught her the importance of giving herself room to reflect, explore and make her own discoveries.

“I’ve missed collaborating, because I love playing with other people and harmony singing, and it's nice when everything doesn't fall on one person's shoulders, but I don't think it's healthy to just do one thing, and the Jennys were really all-encompassing. There wasn't much room for different kinds of musical expression or exploration. But with The Small Glories, even though this is our main focus, it's really important to both of us to have our fingers in other pies, even if they're only very little pies. I'm still doing some solo stuff and some teaching, and JD's got his rock band and also does some solo work, so neither of us is putting all our eggs in one basket.”

Edwards isn’t the only person Luft has shared the project with. Other collaborators include a whole host of diverse talents, ranging from Erin Propp and Scott Nygaard to British folk musician Bella Hardy. Luft was initially paired with Hardy via an exchange programme, which resulted in the creation of two of the tracks on Wondrous Traveler: Fast Turning World and Time Wanders On.

“Folk Music Canada and English Folk Dance & Song Society decided to partner up, and the directors of those organisations approached artists in their respective countries who they thought would be a good fit. The first part of the project happened in Alberta. Bella flew over and we spent a couple of weeks together, writing material and doing performances. We'd never met before, so it was a really interesting experience. Then the following year, I went over to the UK and spent two weeks with Bella doing the same thing. We've become very dear friends, so I'm really grateful to Neil Pearson, who was in charge of bringing us together. He knew both of us really well and knew we would get along. I think we write really well together too, so I'm hoping we'll get the chance to do more in the future.”

The name The Small Glories, which also appears in the lyrics to Home, was first suggested by the band’s producer, Neil Osborne, who previously worked with Luft on her solo album, The Light Fantastic.
“We'd been bouncing names around and someone had suggested The Glories, but we thought that sounded a little too... in your face, perhaps? But while we were in the studio recording, our producer came in and said, 'I've got a name. I think it's an awesome name, and if you guys don't take it in the next five seconds, I'm gonna keep it for another project!' Well, we all thought it was great, and the next day we were working on Home. The lyrics still needed some tweaking, so JD suggested putting the band name in. It just seemed to fit exactly with what I was singing about.”

The album title, meanwhile, is taken from the final track, a haunting fusion of two traditional Sacred Harp hymns - Wondrous Love and The Traveler - with hurdy-gurdy accompaniment from Andrew McCrorie-Shand. A choral tradition followed primarily in the southern US States, Sacred Harp describes a kind of ‘shape note’ singing, where musical notes are printed in different shapes to help readers identify them easily. Each of the four shapes corresponds to a sung syllable (fa, sol, la or mi). Songs are first sung through using just these syllables, allowing singers to focus their attentions on learning the harmonies before getting to grips with the lyrics.

“I can't even remember now how I came across it, but really weirdly I started dreaming about shape-note singing, so I decided to research it and I came across this beautiful documentary. The film came with two music discs. The first was all traditional Sacred Harp groups singing the songs, the second had artists doing their own interpretations of them, and it kind of blew my mind a bit. I already knew some of the songs, like Wondrous Love, from my parents, who are both folk singers, but I hadn't made the connection with this tradition before.”

Another pre-existing work to be radically reinterpreted is Woody Guthrie's Way Over Yonder In A Minor Key. A lost Guthrie song for which only the lyrics survive, it was set to music in 1998 by Billy Bragg and Wilco as a gentle piece with more than a touch of Bragg's trademark acoustic melancholy. The Small Glories' take transforms the song into a joyous, gospel-infused belter that's impossible not to dance along with.

“JD had learned it for a Woody Guthrie 100th birthday concert he was asked to play at, and decided to reinterpret it in a major key. When you look at the lyrics, it’s all about chasing girls up trees and kissing behind bushes - all this really lovey-dovey, fun stuff - so we weren't sure how well the slower Billy Bragg version really suited them. Ours is really upbeat, and it always goes down really well live. We recorded it pretty much live off the floor with our drummer and bass player, and it actually had our producer dancing in the studio, which we figured was a good sign!”

Having already covered its costs through a successful crowdfunding campaign, Wondrous Traveler is now available to order online at a price of your own choosing via The Small Glories website.

“We’ve been approached by several labels, but weighing the options that were given to us, it made sense to stay independent for the time being. I've been doing crowdfunding since the ’90s, before it was even called that, and it's been a really beautiful way of connecting with my fanbase and my audience. That said, there are a lot of things a label can offer that may be too time-consuming or too costly to do on your own. Releasing this album has been quite draining financially and on a work level, and keeping on top of the business side of things does take away from creativity time, so we might look into signing to a label for future projects.”

After warmly received appearances at The Hive in 2013 and at Shrewsbury Folk Festival in 2014, Cara is looking forward to heading back here.

“I've been going over to the UK at least once a year since 2006, so I really feel like I've got a community there, and whenever I'm on tour I love to reconnect with all the amazing people that I've met over the years.”

The Small Glories perform at The Hive, Shrewsbury, on Sunday 20 November.