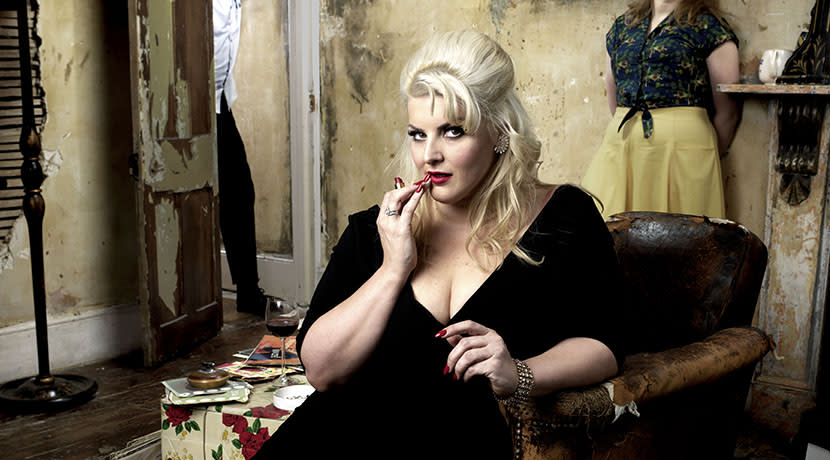 Playwright Shelagh Delaney’s debut work, A Taste Of Honey, caused a significant stir when it was published in 1958. Now, a new National Theatre version of the play, starring Jodie Prenger, is visiting the Midlands as part of a UK tour. What’s On caught up with Jodie to find out more...

Shelagh Delaney’s A Taste Of Honey (published in 1958) is a career-defining British classic depicting working-class life in post-industrial Salford. Tackling taboos of the time, including homosexuality, inter-racial relationships and single mothers, the play earned its teenage writer comparisons with Look Back In Anger author John Osborne.

Delaney’s debut work was part of a new movement in British theatre dubbed ‘kitchen sink realism’. The movement saw up-and-coming playwrights striving to create disillusioned working-class characters who reflected real life, rather than the crass and gormless ones which had long inhabited the genteel scripts of West End productions. A Taste Of Honey’s association with this new cultural movement, and in particular with Osborne’s Look Back In Anger, saw Delaney being pigeonholed as a comparatively ‘angry young woman’ - a lazy characterisation of her that she detested.

Jodie Prenger, who stars in the new National Theatre tour of the play, can absolutely understand why the description would have made the playwright bridle: “Delaney unleashed this strong female voice that was sort of  unknown. There were definitely those voices out there, but not necessarily put out on the same scale. I don’t think Delaney was an angry young woman. I think I can hear the same woman’s voice in A Taste Of Honey as I do in women today. It’s just that back then it wasn’t as acceptable for a woman to be heard, especially when talking about such taboo subjects as this play does.”

A Taste Of Honey’s matter-of-fact approach to working-class life, its deviance from sexual and social convention, and its sympathetic presentation of both a gay man and a single mother, was bold for its period. But most of all, Delaney was more nuanced than the likes of Osborne; A Taste Of Honey evokes a sense of playfulness, warmth and wit that sharply and brilliantly contrasts with the doom and gloom of its subject matter.

“That’s the joy of her,” says Jodie. “She perfectly balances ‘dark, moving and witty’. I think that’s why people still want to see it; they want all these truthful representations of actual human life.”

The playwright’s debut offering was certainly reactionary. Delaney had been sparked into writing it by her intense dislike of Terence Rattigan's Variation On A Theme, a play about a socialite and a young ballet dancer which aimed to be socially bold. However, its genteel style and content meant it only skimmed the surface of its taboo themes. Convinced she could do better and spurred on by her loathing of traditional, decorous drawing-room dramas about the love lives of well-bred people, Delaney penned A Taste Of Honey aged just 19.

Set in a dingy Lancashire lodging house, the storyline focuses on schoolgirl Jo, who is soon to have a child by a black sailor - a man who abandons her. The play follows Jo’s fractured relationship with her mother, Helen, and with a kind, homosexual art student named Geoff, who helps her during her pregnancy and tries to reunite mother and daughter.

“I absolutely fell in love with the play because it’s so honest, real and tender,” says Jodie. “It’s the mother-daughter relationship that  really got me. I know I’ll be thinking about my own relationship with my mum when I’m trying to create the love and tension between Helen and Jo. They’re so different in some ways, but also so similar in others, so they end up clashing.”

A Taste Of Honey was first staged in 1958 by the now-legendary Joan Littlewood Theatre Workshop. Two years later, it hit the Broadway stage and was then promptly made into a film. More recently the play was a great influence on English rock band The Smiths, particularly vocalist Morrissey, whose lyrics borrow from the script. Indeed, the band’s song, This Night Has Opened My Eyes, is based entirely on A Taste Of Honey. Delaney also features in the artwork for the band’s single, Girlfriend In A Coma.

So 61 years after it was published and eight years after the playwright’s death, how relevant is A Taste Of Honey to modern times?

While single mothers are nowadays markedly more of a social norm, 21st century single  parents - the majority of whom are women - are still most likely to be from a working class or even impoverished background. Adding further insult to injury, wealth continues to be unequally divided across the UK, with the South East, when compared to the North West region in which the play is set, boasting more than twice the amount of household wealth.

Sexuality is also an increasingly hot topic in 2019. People, particularly women and those from the LGBTQ+ community, continue to be shamed for their style of dress and sexual activities. Hate crimes against minorities are on the rise...

With all of this in mind, isn’t A Taste Of Honey just the play we need? After all, the strength and complexity of the relationships at the centre of the work make it a timeless theatrical classic.

Jodie Prenger agrees: “I remember speaking to my nan about the 1950s’ class divide, as she was from Manchester. There was always something to fight for. You rolled your sleeves up and got it done, or you made do. A Taste Of Honey is all about fighting and striving - no matter what you face - and is mixed with genuine, warm humour; something you still find in every corner of the UK today.”

Jodie is particularly attracted to the play’s depiction of feisty women: “Strong female characters with many layers are the main thing I really enjoy getting my teeth into. For me, reading the play was just like hearing my nan’s voice. The feistiness and the fight that my nan had, I saw in Helen. It really shocks me that some past reviewers of the play have seen Helen as a monster. I think she’s just so real, and the only way you can play a character like Helen is with truth. I just don’t see Helen as a monster; I just find her a character of circumstance.”

So what makes the National Theatre’s new version of A Taste Of Honey different?

“I’m known for doing a lot of musicals, but I do a lot of plays now, too. A Taste Of Honey promises to be the best of both because we do have a lot of fantastic music as a backdrop to the action. What the team at the National Theatre are trying to do is keep the setting and feeling of the 1950s but mix it with the contemporary to hint at the modern day, meaning that it could be set in almost any time. We even have a live band and the music of artists like Peggy Lee and Amy Winehouse, along with live jazz and folk.
“Music and drama, darkness and humour. This is the Hovis of the theatre world.”

A Taste Of Honey shows at Wolverhampton Grand Theatre from Tuesday 5 to Saturday 9 November.