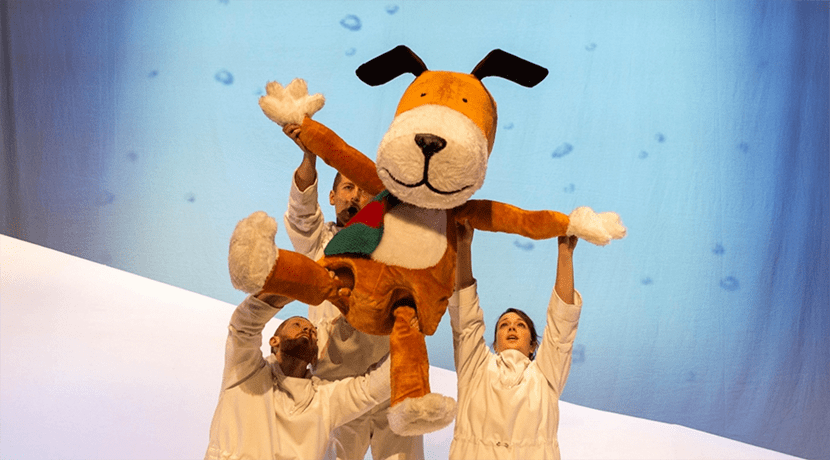 One of children’s literature’s most popular canine characters takes to the stage this month. What’s On caught up with the writer & illustrator of the Kipper series, Mick Inkpen, to find out about a new theatrical production that’s bringing together two of his stories...

Slot Machine Theatre’s Christmas production, Kipper’s Snowy Day - showing at MAC Birmingham from late this month till the end of the year - is based on not one but two of Mick Inkpen’s award-winning books about Kipper the dog. The show follows the escapades of Kipper and his friends, whose Arctic adventures take a turn for the worse when their pal, Arnold, goes missing in a storm…

“The production is very faithful to the spirit of the books and the character of Kipper,” says writer & illustrator Mick, “but I urged Slot Machine not to be too worried about being absolutely faithful to the storyline. So we agreed that they’d make an amalgam of the two main books: Kipper’s Snowy Day and Kipper’s Christmas Eve. They’ve also introduced their own things, like the storm, which doesn’t appear in either book. The fact that they had that freedom meant that they could really play with what they were doing, rather than slavishly putting one of my books on stage.

“It’s a very multifaceted show. There are graphics, songs, puppets and a wonderful plot - it’s visually interesting and completely original. Whether you’ve read the Kipper books or not, you’ll be delighted by the surprises along the way. This little production really deserves lots of exposure because it is truly wonderful.”

Kipper the dog first appeared 30 years ago in Mick’s book, The Blue Balloon.

“That was the book which really put me on the map and made me think of myself as a proper, successful children’s author. In it, Kipper wasn’t quite the Kipper that we see in the later stories and in this show because he was on all-fours and just a boy’s companion. The Blue Balloon was a very singular kind of book, so a sequel didn’t really seem to have any legs. What the publisher and I wanted was to base a series of books around a character. Developing the character of Kipper from The Blue Balloon more than fitted the bill.”

Mick fell in love with all things creative at an early age: “My favourite subjects at school were English and Art. My favourite part of English itself was the creative essays and writing. I can’t really remember when my passion for storytelling and illustration started exactly, but it was definitely around that time. I cut my teeth in the world of work, and on illustration in particular, by doing greetings cards for Gordon Fraser. Once I’d developed a style, I thought it would perhaps be possible to go into children’s books. It seemed like a very good medium for the kind of drawing I liked doing the most.”

“Music is a very strong feature. There’s lots of fun, comedy and word play in the lyrics of the songs, and they’ve been written specifically for the production. And it has the same kind of puppetry as in War Horse. You’ve got that marvellous thing where the audience suspends disbelief. They’re complicit in ignoring the puppeteers and allowing the story to unfold. That in itself adds a certain level of magic to the production because the audience feels so involved in the story. I’ve always loved puppet work on stage; I think it’s a really powerful medium.”

So what else does Mick think makes this show unique?

“The set is a great example of the theatre company thinking creatively about how to really bring a book to life. With the Kipper books, I’ve always tried to avoid placing him somewhere in particular. While, for example, Postman Pat is in a particular landscape in a particular place, Kipper exists in this white world of the page, which means I can do with him what I like - I can even send him to the moon! Slot Machine wanted to capture that white-world look, even more so with Kipper’s Snowy Day being set in a snowscape. So the back of the stage is an entirely open book with blank pages, which allows them to use it as a screen upon which they project things. For example, the violent storm is expressed by just an animated scribble rushing about all over this book backdrop.

“Another part of the white world is that the entire action takes place on Big Hill, which features in the Kipper books. Big Hill is covered in snow, so the set has this white double-page with a big, sloping snowy hill. This allows Slot Machine to play with perspective, so at certain points there are tiny puppets at the top of the hill to make the characters look very distant. It’s a very simple set, but one that really allows the action to spring off the stage in the same way that my characters spring off the page. Slot Machine had a very playful approach to making this piece of theatre, and I was so pleased about that. Playfulness is one of the main things that characterises what I do, and that’s something I think both kids and parents will engage with.”

It was these similarities in creative vision and style that encouraged Mick to work with Slot Machine in the first place. He had been approached about stage adaptations of Kipper previously, even before the BAFTA-winning animation of the series, but only when Slot Machine came along did he feel he’d found the right match: “I think the team at Slot Machine are really invested in theatre for children and what you might call ‘pure theatre’, rather than celebrity-based theatre. I was very at home with the way they thought about my books and about their vision for Kipper’s Snowy Day. Creatively I found it very easy to work with them and readily trusted them to have a very free hand in terms of what they wanted to do.”

MAC Birmingham is holding a special Kipper’s Snowy Day drawing competition, which will see one lucky youngster and their family win tickets to see the show. The competition will be judged by Mick himself: “You never know what you’re going to get when children are set loose on a page. I’m really looking forward to seeing their efforts and finding a worthy winner.”

Getting children interested in the arts is very important as far as Mick is concerned: “The tick-box attitude to learning in schools now is so boring. I think it’s hugely important that children are encouraged to use their imaginations and play around with ideas, rather than having such a constrained focus on just getting things right. School should be a place where you can openly discuss and explore things - even get things wrong - without being judged. I don’t think society can expand very far beyond what’s fairly utilitarian without imagination and without playing with that world which children hold so dear. It’s hugely important to support art, reading, theatre and just generally being creative, so that our children can grow and learn.”