Snow Queen is casting her icy spell over Old Rep 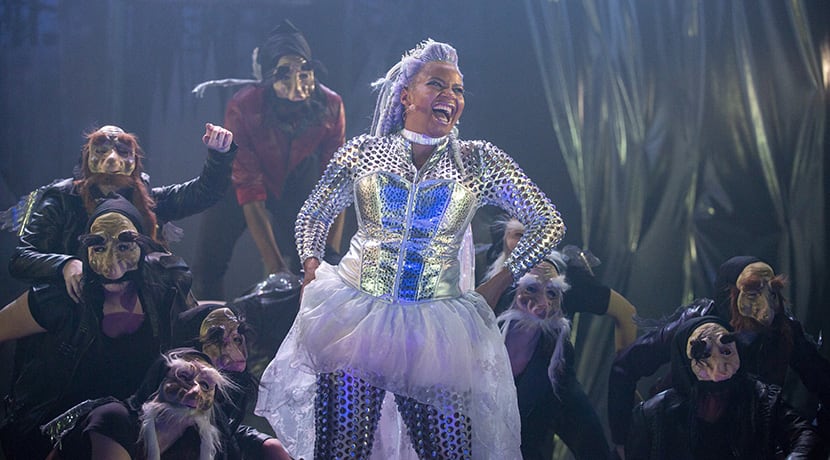 Hans Christian Andersen’s tale of the infamous Snow Queen has had a profound impact on countless other stories, including The Lion, The Witch And The Wardrobe, Disney’s Frozen and classical ballet The Nutcracker. This Christmas sees Birmingham’s Old Rep theatre present its own take on The Snow Queen, a show that’s directed by Alec Fellows-Bennett.

“The Snow Queen has all the elements you’d want from a Christmas period show,” explains Alec. “The title immediately says winter, and because of films like Frozen, which take a very different interpretation of Hans Christian Andersen’s story, there’s a very particular vision and a widespread popularity surrounding The Snow Queen. Its themes are also what I look for in a good festive yarn. Dickens started it off by writing A Christmas Carol and injecting morals and the ‘Christmas message’ into his story. The Snow Queen certainly carries on that idea of coming together. It’s a story of isolation, and about looking after your own interests - the things that lead to people’s ruin. Whereas if you’re inclusive and look at things from other people’s perspectives, then the ice melts and we get to the spring. The Snow Queen has comic characters and lots of goblins, fairies and other beasties and mythical creatures, while also conforming to that tradition of the moral quest, where all the characters get it right in the end.”

Alec firmly believes that the changes made to The Snow Queen by writer Toby Holst have ransformed the story: “Hans Christian Andersen’s original isn’t actually very good! It’s bizarre because it has obviously influenced so many other stories. It’s iconic, but when you actually sit down and read it, it’s almost like a repository for all the short stories that he couldn’t work out how to finish or fit elsewhere. This young boy, Kai, gets stolen by the Snow Queen - no one knows why and it’s never explained - and his best friend, Gerda, has to rescue him. Gerda goes on loads of adventures on the way to getting to the Snow Queen’s palace - none of which have anything to do with getting there. So the story sort of doesn’t hang together.

“As a result, other versions of it have picked out other characters to carry the story along. There’s a very tiny mention about the sisters in the original story, and that’s what Disney picked out and ran with for Frozen. We’ve done a little prologue to the main story. I suppose it’s about how prejudice came into the world. So when Gerda is on her adventures, it’s the people who help and hinder her - and why they do so - that we’ve picked out to focus on. We’re hoping that this makes it into one coherent story.”

The Old Rep’s version of The Snow Queen is more than just a play for the festive season… it’s actually a Christmas musical!

“Our original score has been written to coincide with our brand spanking new script. The Snow Queen isn’t quite like a pantomime. It’s Christmas, and I can’t have a scene with a goodie creeping up behind a baddie without someone shouting, ‘He’s behind you!’. I’m not going to stop anyone from doing that, but it’s not there as a traditional panto piece. We’re doing something different, although it’s still very funny.

“Steve Allen-Jones is brilliant at composing, and he’s really got to know the Old Rep audience over the last few years. Toby Hurst will go away and write a whole page of dialogue and Steve will come back and say that he’s incorporated a song. So I would go as far as to say that what we produce here now are Christmas musicals. They’re not Les Mis or Phantom Of The Opera, where everything is sung all the way through, but I think that now the songs have become so integral to the storytelling, then yes, we do produce Christmas musicals here at the Old Rep. And it’s a Christmas musical with puppets, too!”

“Our production doesn’t change simply because we’ve got the Birmingham Ormiston Academy (BOA) students working with us, Part of my responsibility is to run it like any other professional production, to give them that insight. We don’t give them any special treatment - they do a professional job on a professional schedule. We put on the same with the BOA students as we would with a professional chorus and dancers.

“When Barry Jackson first thought of the Rep as a professional company, as opposed to a pro-amateur company, the idea was that it would be where young actors came to cut their teeth on new plays, new writing and new interpretations of classics like Shakespeare. George Bernard-Shaw wrote plays to premiere here and be performed by bright young things. Those upcoming actors went on to be Laurence Olivier, Ralph Richardson and Edith Evans - these great names of 20th century theatre. But they all came here to learn their craft. I’m very proud to continue that legacy of the building and establishment.”

As well as giving the performers of the future a space to learn, The Snow Queen’s run will include relaxed and BSL performances.

“The key word is family. This is a show for everyone. Theatre is a communal activity. We do everything we can to be inclusive. I would never want a person to sit at home and think that, because their child has some sort of disability of any description, the theatre isn’t for them. I understand, of course, parents can worry about affecting other people’s enjoyment when, for example, they bring their autistic child to the theatre. Therefore, relaxed performances are great, because parent and child can feel absolutely happy that           everyone in that room is either in the same boat, or completely understands what they’re going through and doesn’t mind if they need to get up and move around or shout out. We had a massive uptake on our relaxed performances last year and almost tripled our uptake on previous years. It’s wonderful!

“We’re doing the same with the signed performances. It’s all about making sure anyone can see our show. Last year we experimented in seeing if we could somehow effectively get sign language into the actual performance, and we’re looking to expand that this year. The people who do the signing to accompany the show came into Pinocchio rehearsals last year and helped us incorporate sign language into our choreography. If you don’t speak sign, you wouldn’t have noticed it in our shows, but if you do, then you can understand sections of the dialogue without having to constantly look over to the side to see the signer. In fact, one of the dance routines for last year was made up entirely of sign. We didn’t know if it would work or not, but we had such positive feedback on last year’s efforts that we’re getting even more sign        language into the movement of the characters. Sign is fantastic for storytelling.”

So why has Alec continued to return to the Old Rep throughout his career?

“They keep having me back! I started my professional life in this theatre 20-odd years ago. I started in the youth theatre here, training since I was nine or 10. Back in those days, Birmingham Stage School was based here at the theatre, and they had a pool of young actors and professionals who would get auditions first when the main Rep, Alexandra   Theatre or the Hippodrome were casting. Working here feels like going home. This was where I made all those early connections to the theatre world and discovered what it was like to be on stage. If I could only perform or direct for the last ever time in one place, I’d choose the Old Rep. Having gone on to be on stage all over London, the UK and America, this would still be the place I’d come back to. I think what gives a theatre its personality, identity and language is more what it produces itself than what tours to it. I’m so proud to be a part of that.”

Alec’s focus is firmly on getting The Snow Queen right for Birmingham audiences: “We live in uncertain economic times, and for many, the Christmas period is the only time of year a family might splash out on theatre tickets for everyone - even though we do try to keep our prices as affordable as possible. What I always want my audiences to leave feeling is that they shared a wonderful experience. The 19th century idea of the fourth wall between the actors and the audience is absolute nonsense - the theatre is all about togetherness. We as actors and theatre-makers rely on the audience to lie and tell themselves that what’s happening on stage is real, and the audience relies on us to tell a great story and pretend the audience isn’t there at the same time. Theatre is a load of people in a room silently agreeing to all tell the most wonderful lie - and that makes anything possible. Theatre is like nothing you can ever experience elsewhere, and if people coming to see The Snow Queen leave believing in the magic of theatre, then we will have done our jobs right.”

The Snow Queen shows at The Old Rep, Birmingham, until Monday 30 December.