The Jacksons talk ahead of Mostly Jazz perfomance 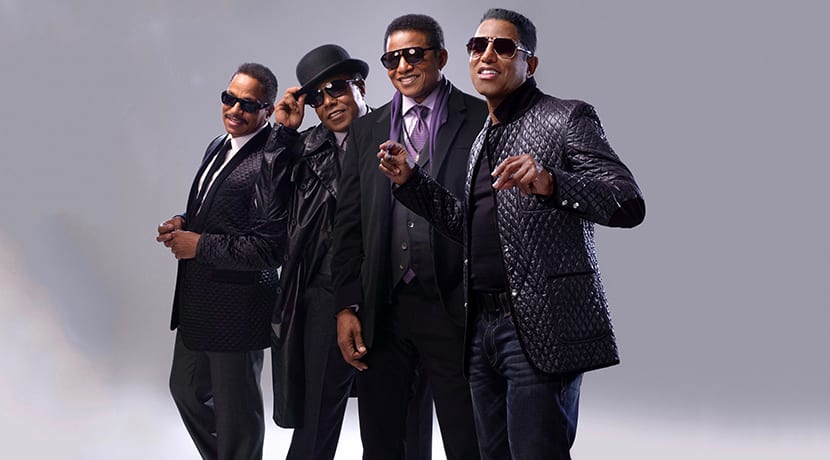 Stopping off in Brum as part of their World Tour 2019, the Jackson brothers - Tito, Jermaine, Jackie and Marlon - boast a back catalogue of earworm pop, slick funk and upbeat disco, with such hits as 1969’s Motown debut I Want You Back, ABC, Blame It On The Boogie, State Of Shock, Shake Your Body, and the epic Can You Feel It.

Having gone into hiatus after 1989’s 2300 Jackson Street album, the brothers reconvened in 2012 to great acclaim.

Taking a break from touring and recording, guitarist and founder member Tito recalls how it all began ...

How old were you, Jermaine, and Jackie, when you started playing together with younger brothers Marlon and Michael?
We were more like eight, ten, eleven, in that age range; they were only four, five, six, something like that. Michael was just in Kindergarten or first grade, something in that area, but he was always begging to be in our group, and we'd tell him, ‘no … you’re not ready, you’re too young …’ you know. We’d be trying to practice, and they’d be playing, having fun with their toys, and that whole thing, rolling cars across the floor, so we told them: ‘You’re so young! You’re not ready yet!’

So what led you to invite your younger brothers... ?
Michael had some type of performance, and we heard him sing, for the first time - because he never sang around the house! Never! We never heard his voice, and then we went to that thing and heard him sing and couldn’t not believe what we heard, so we put him in the group [laughs] … we put him in the group immediately! Marlon said, ‘Can I be in the group too?’ and we said, ‘of course!’ Because he was the only brother who wasn’t part of it, we say ‘yeh, you too,’ so we put them in the group at the same time.

Your first album was called Diana Ross Presents The Jackson 5, and she was cited as discovering you. But it was actually Gladys Knight, wasn't it?
That is very true. What had happened … after we had started singing, and we’d got good at it, we started doing a lot of shows in the area, and Chicago area, Ohio … What we used to do is open up for professional bands, you know? Bands like Jackie Wilson, Bobby Taylor and The Vancouvers, Gladys Knight … we used to go to this place called The Regal Theatre and they would have amateur night, and have a major artist close the night, and we used to be part of that opening. The very first time it was Bobby Taylor who saw us, and he wanted to bring us over to Motown - I think he had given [Motown boss] Berry [Gordy] a tape of us, and we didn’t hear from Motown for a long time actually, 2-3 years. Then, the second time we opened up for another Motown artist it was Gladys Knight and The Pips, and it was Gladys, actually, who got Berry to really listen in, take attention: ‘You need to listen to this group!’

You passed the audition with Berry, is that when you met Diana and all the other Motown stars?
The very next day we were invited to Diana Ross’s birthday party at Berry’s house, by the pool, to perform. And at that party were all the Motown artists, only a few didn’t show, from Stevie Wonder to Marvin Gaye, to The Temptations, The Four Tops, The Vandellas, everybody was there, and here we are, singing our songs to them!

After six years on Motown, the band moved to Epic, rebranded as simply The Jacksons, and you all became more involved in writing, producing and creating your own music. Was that a liberating experience?
Again, we were all still pretty young ... just teenagers. We understood it, but we didn’t understand the details because here we are, we’re making hit records and this’n’that, but we wanted to be writers and Motown wouldn’t let us write and that bothered us. We felt we were just as capable as other writers, so anyway Berry says ‘you’ve got this good thing going here, why mix it up or break it up?’ he just didn’t understand that we were writing and we were getting good at it. My father had asked them, ‘give my boys a few songs on the album,’ but Berry didn’t want to do it, so we had to move on. Of course there were probably other conditions under the contract, but the writing didn’t happen so we moved on to Epic and started working with Kenny Gamble and Leon Huff from Philadelphia International, which Epic assigned us to, to their project, their label. We started working with them and put out our first record with them, which was entitled The Jacksons [1976], and the second album we did on that label was Goin’ Places [1977], and the third one was the Destiny album [1978] which showed our writing ability. Those albums that Kenny Gamble and Leon Huff produced, we only had a couple of songs, because that’s all what we wanted – but that was written into our contract with Epic, that we get a couple of songs, that we write, on the album, and they had to honour that. And our songs ended up being successful and good, and I think one of the reasons we had a complete album on the third album was that some of us really believed in our writing ability, so wrote the third album and it was one of our biggest selling albums, Destiny.

You followed Destiny with Triumph (1980) and Victory (1984), forming something of a trilogy - were they conceived as that?
It wasn’t a trilogy, it wasn’t planned.

You wore some pretty flashy and bright clothes back then. Do you have any of your old jumpsuits left?
Nooooo … I don’t, I certainly don’t. Oh! I might have one of them somewhere, I remember seeing one of them a few years back.

Creating a look still seems important to you today...
I started wearing the bowler hat about 20 years ago, around the 3T days [the trio featuring Tito’s sons]. I was maybe wearing it two years prior to that, but it was about that time period.

The UK has always welcomed you, right since the early days. When you first visited here in the early 1970s, was it a repeat of the Jacksonmania you were experiencing in the US?
Yes it was, yes it was. It was very exciting and scary and everything else [laughs]. We enjoyed it. We flew over and we came over earlier, afternoon-ish, and the [plane] captain came on the intercom and had mentioned something about us and welcoming us to the UK and there’s 5,000 fans at the airport waiting for the band ‘… so let’s let the band get off first…’ My gosh! When we got there! It was crazy! In fact The Osmonds were over there too, they’d just finished their tour but they decided to stay a couple of extra days, and we happened to be staying at the same hotel. The airport ride was crazy, trying to get through the crowd. And we get to the hotel and those same 5,000-plus fans flocking up the street, outside the hotel room, and other the other side of the hotel, fans were playing The Osmonds music outside their windows – I guess they were trying to capture fans.

Another band of brothers, was there any rivalry between you and The Osmonds?
We ended up being friends with The Osmonds, we played football games. Those were the days I really miss, we were just young kids, learning how to be young men, and deal with show business and learn what we do, and I felt the same energy come from The Osmonds – being as young as they were at the same time. We became partners from that point on. It was the public who wanted us to be rivals I think. But we loved each other and we respected each other. One thing I wish we had done, in our younger days, was work with them. But who knows? It’s never too late! It would have been great to have some Jacksons/ Osmonds records from those early days.

You know that their first hit record, One Bad Apple, was written for the Jackson 5, and Berry Gordy turned it down.

In the late-60s/ early-70s no-one really knew how long a career in 'pop' could last because it was still relatively new. Did you think it might be all over quickly?
We knew that we were in this game forever, it was what we knew, it was our dream, that was what we always wanted. Athletes only retire when they are hurt, they’re too old or can’t keep up, musically you don’t age like that, we were in it for the long haul. We were looking at all the older artists, and at that time – we didn’t realise it but – groups like The Temptations and Diana Ross, were all really kids, in their early-20s, mid-20s, maybe one or two were in their 30s, they were much older looking to us, much older people. You look at artists like The [Rolling] Stones and The Temptations as well, there were still doing they thing, so as far as us, we were in this forever. We want to be like Frank Sinatra and retire on stage. Leave this earth on stage … well not on stage, but still performing. A lot of artists, like Redd Foxx, The Rolling Stones ... they’re all little older than us, and they’re still doing their things. As far as age, all the brothers have always been very [fit] on and off stage as well, as everyone is in good health, and have good strong muscles, and can still do what we did when we were younger ... and that’s a great thing!

Outside of The Jacksons, you also play with The BB King Band - any plans to bring that over here?
Yes. I would love to. I know we were going to be coming over either later in the year, or early next year. We were scheduled for Paris, but for whatever reason that got [postponed].

Any other projects?
Oh yes! I’m releasing another record here, and I’m also recording with George Benson. We’re doing a duet together, and I’m recording blues album. Of course I’m always busy – writing and recording. It keeps me pretty busy.

For more information, including full line-up and tickets, see: mostlyjazz.co.uk