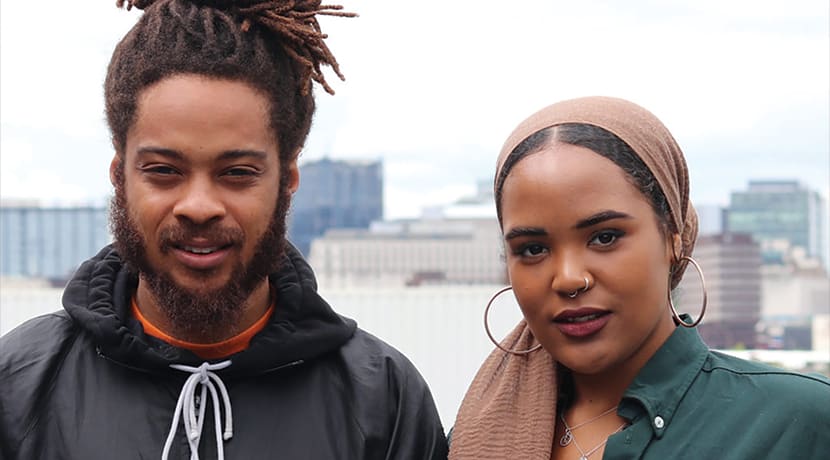 Organised by award-winning music & arts company Punch Records, the UK’s only Black Arts commissioning festival is this year shining a spotlight on the future.

Now in its 13th year, Bass Festival has entrusted two of Birmingham's brightest young creatives - Aliyah Hasinah and RTkal - with the responsibility of curating the event and leaving a new legacy.

“I’m a curator and aspiring historian and filmmaker,” explains Aliyah. “I started my career in digital marketing, then ended up as producer by the end of an apprenticeship. I then became freelance and worked on a variety of different projects with an organisation called Apples And Snakes, which was my first actual contracted job. But a lot of my work has been pretty DIY. If I have an idea and it’s an exhibition, for example, can we just put it up in a cafe? Can we speak to this artist and get work shown? I've also worked with loads of artists and organisations around the theme of decoloniality and what it means to move the gaze away from the white gaze and not to be apologetic about the way we  curate and take up space.”

Aliyah’s curated projects include Bald Black Girls with artist Ruth Sutoyé, The Gallery Is Many Things at Eastside Projects and The Past Is Now at Birmingham Museum & Art Gallery.

Bass Festival’s second young curator, RTkal, is a veteran of the Birmingham music scene. “I’m the co-founder of Beats & Barriers Music Academy,” he explains. “I also co-own IDST music studios and I run a business called The MBC - Music, Birmingham, Culture - all of which are based in Digbeth.”

Inspired both by his generation and his heritage, RTkal has used music to spread positive vibes and unite and entertain audiences across the globe. His CV includes performances at Glastonbury, Bestival, Lovebox and Outlook, to name but a few.

Visitors to Bass Festival can expect six days of live music, workshops, panel discussions, exhibitions and film screenings. There will also be an unveiling ceremony for the event’s Future Faces Of Birmingham mural.

“The artists I've chosen are part of a wider community who are pushing a culture forward,” RTkal explains. “A lot of them are second generation, so their parents are musicians or work within the creative industry, and they’re building careers based on a lineage of knowledge and culture. They stand for a bigger thing; it's not just about what’s cool or new. It’s future music and movements based on solid foundations.”

This year’s festival theme is ‘the future’. Explaining where he plans to take it, RTkal says: “I’m booking artists from different parts of the world and different parts of the country and having them perform alongside Birmingham-based artists. Bass 2019 is going to highlight the calibre of artists that we have to offer as a city. I also want to highlight the skills and high level of entrepreneurship we have in Birmingham. We really do have so much to offer.”

Aliyah adds: “I’ve been thinking a lot about reimagination and what it means to be black and everything that that is. I think the future is blickity-black-black! It's independent and its decolonial. Decolonisation is undoing and unlearning behaviours that we’ve been taught are correct - like what ‘Blackness’ is, for example. Decoloniality is unpicking why we do the things that we do, how that’s affected us mentally, psychologically, and who we are seeking approval from and why. Decolonisation is constant questioning, and in terms of the future, it's just not a ‘yes man’ future.”

Looking ahead, Aliyah would like Birmingham’s creative network to look more like an industry: “I'd like infrastructure. I'd like us not to have to steal resources from other places, and I'd like there to be spaces for people to reap benefits, whether that be artistic development programmes or places to pitch your ideas or create them. And I’d like it to be based on the merit of the idea rather than how many followers you have. I’d like it to be a decentralisation of everything which is stuck in London; a lot of the industry is there but a lot of the talent is here, so we have to connect and build something sustainable.”

So what do RTkal and Aliyah feel are their greatest achievements to date?

“Moving back to Birmingham and setting up the MBC in Digbeth,” says RTkal. “Over the years, I’ve managed to surround myself with people who are talented and passionate about music & arts. I’ve also learnt a lot from having the opportunity to perform across the world and learn from the music industry internationally. But what it brought to my attention is how overlooked the talent in Birmingham is, and how little we have in terms of a creative industry infrastructure. The MBC and IDST studios are a contribution to the infrastructure. There's a lot of work to be done, but we aim to give Birmingham-based artists the support they need to promote their artistry, and a place to facilitate the creation of new art. We want to keep Birmingham's creative industry health and thriving. We’re working on a sustainable, creative future.”

“And also, although it's not an ‘achievement’, I would say the incredible people I’ve met along the way. I really admire and respect the people around me.”

What do the pair want festival-goers to take away from this year’s Bass?

“We want the city to feel inspired,” says RTkal. “We want people to feel confident about the future locally and in comparison to the rest of the nation. Birmingham is rich in talent, no doubt about that, so let's highlight it and nurture it.”

“I want people to see the multiplicity of possibility,” says Aliyah. “Anything is possible. There are so many different ways to think about things, different artists and different versions of what the future could look like. All we have to do is start making steps towards them. I’d like people to leave the festival thinking, Shit, something amazing is happening in Birmingham, and Birmingham is the future.”

Bass Festival takes place at various venues across Birmingham from 22 to 27 October.