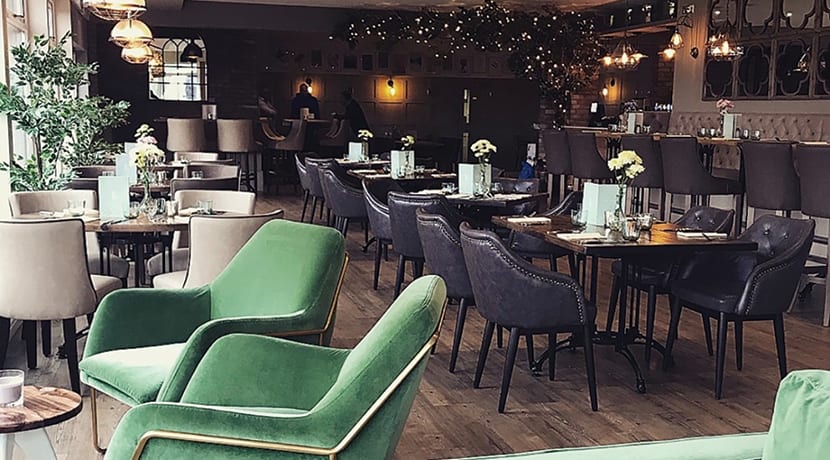 Dartmouth Golf Course - and more specifically for our purposes, its stylish 60-cover bar & restaurant, The Lewisham - is located, perhaps rather unusually, at the back of a housing estate near the town centre in West Bromwich.

The golf course - boasting the longest opening hole in Europe and the longest par-five hole in the UK - was named after the man who opened it in 1903, Lord Lewisham. Its restaurant was previously a members-only club, but in recent months the building has been tastefully renovated to create a stunning public eatery which not only overlooks the golf course but also affords panoramic views of Sandwell Valley.

The décor is warm, welcoming and contemporary while at the same time in keeping with the golf course. It has the ability to draw the outside in, and in doing so creates a bright and beautiful space where you would be happy to enjoy a relaxing meal with friends and family or a few drinks and a light bite after a round of golf.

My husband and I visited on a Friday lunchtime, and although it wasn’t bustling, there were several groups of people already  enjoying the food when we arrived. It took a little time for a staff member to be located on our arrival, but once we’d been shown to our table, our server was nothing short of a delight - attentive, informative and friendly.

The seasonal and gastro-style British menu has been conceived by Head Chef Steve Edrop, who sources the produce locally, with some ingredients even being grown on-site. The reasonably priced à la carte menu is fairly concise but has plenty of variety. There’s also an extensive drinks menu, including delicious cocktails such as the one I opted for,  Rhubarb Sour.

For starters, I chose the goat’s cheese bon bons while my partner had the spicy BBQ chicken wings. The bon bons, packed to the brim with cheese and deep-fried with a light smattering of breadcrumbs, were served with a sweet cranberry & red onion marmalade. Close your eyes to savour the first mouthful and you instantly know that you’re onto a winner!

Whilst the chicken wings were incredibly tasty, boasting a real depth of flavour, there was very little of the promised heat. A small bowl of water or a lemon wipe would also have been good,  in anticipation of the sticky mess that eating wings brings with it!

I opted for the cornfed chicken supreme for my main course; my partner chose the lamb shank. The presentation of both dishes made us want to dig in straight away, although this did mean me destroying a piece of art!

My chicken dish was very nice, but I felt the smoked Applewood cheese and white wine sauce was fairly bland and needed more seasoning. The fondant potato was perfectly cooked and the carrot puree as smooth as you like. It was a little on the thin side and a tad watery due to the wilted spinach plated up next to it, but overall it was extremely well executed.

My partner found no fault whatsoever with his lamb shank, the meat falling off the bone and being beautifully complemented by a stunning lamb mint jus.

Of course, we managed to save a little room for dessert, so I had the ‘panna cotta of the day’, which was mango, and my partner chose the chocolate brownie.

My dessert was to die for - rich, creamy and accompanied by fresh raspberries and blackberries. The chocolate brownie was dense yet slightly gooey and served with vanilla ice cream - what’s not to like?!

With just a couple of tiny tweaks, The Lewisham could be the ultimate foodie destination in the area. Although not massively local to us, we certainly wouldn’t hesitate to return - especially once they start serving, as promised, breakfasts and afternoon teas as well.