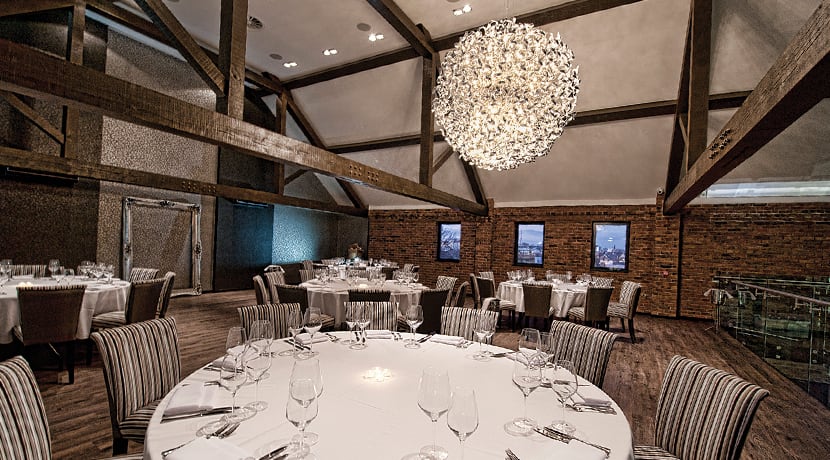 ‘Five Rivers offers the best Indian food in the Midlands’ is the opening line on the Walsall-located restaurant’s website - a bold statement which I simply couldn’t ignore. I’ve eaten in many an impressive Indian eatery over the years, and after reading that declaration, I absolutely knew I needed to check the place out.

The award-winning restaurant boasts a sumptuous fine dining menu created by head chef and founder Rashpal Sunner, a man who has prepared banquets for the likes of former President of the United States Bill Clinton and ex-prime minister Tony Blair, to name but two.

One of the first things my partner and I noticed when we were welcomed into the restaurant were the numerous awards displayed in the main bar area. From Best Midlands Newcomer in the British Curry Awards to Best Restaurant in the Business Eye Asian Business Awards, Five Rivers certainly has an impressive amount of silverware to its name.

Featuring exposed brickwork and timber frames, the restaurant is stylish and boasts a contemporary feel. Chilled-out house music was playing through the speakers, which helped to create a relaxing and welcoming atmosphere.

Culinary delights on offer include Lasani Chilli Duck, Nihari Shank and Goan Fish Curry. However, on the evening we visited, we dined from the four-course Mother’s Day menu, which started with an amuse bouche of Paneer Hara Bara - one of India’s most famous barbecue dishes. The dish comprised Indian cottage cheese marinated with mint and coriander and the chef’s signature spices, finished in the tandoor. Vibrant green in colour, it was an elegant and tasty dish with which to kick off proceedings.

As I was eating, I caught a glimpse of our neighbouring table’s cocktails - they looked insanely good! Pity I was the designated driver for the evening! Naturally, I had a look through the menu to see what I was missing. A couple that particularly caught my eye were Solero - Amaretto, passionfruit puree, apple juice, lime zest and cream -  and Millionaire’s Stiletto - vanilla pod-infused vodka, fraise liquer, home-brewed vanilla syrup, strawberry puree and cranberry juice.

Next up was a choice of four starters - Aloo Tikki Chaat, Manchurian, Murgh Assiette and Fish Amritsari. I opted for the latter, which comprised succulent chunks of tilapia coated in an ajwain and gram flour batter which had been delicately spiced and deep-fried. Served with a tomato chutney, it was an absolutely stunning dish. The batter was perfectly spiced, boasted a rich, golden finish, and in no way overpowered the flavour of the tilapia. The chutney was sweet and spicy - the perfect accompaniment to the perfectly cooked fish. I could have eaten it three times over!

My partner chose the Murgh Assiette, which featured three beautifully tender cuts of chicken breast pieces marinated in Five Rivers’ signature spices - Malai, Hariyali and the classic Murgh Tikka - all slow-roasted in the tandoor. The flavours from the Malai marinade, which featured garlic, chilli, lemon, spices and cheese, were impressively subtle, whilst those from the Hariyali - mint and coriander - and the Tikka were more apparent. Combined, they created a medley of tasty, authentic flavours and made for another triumphant starter.

For the main course, we were treated to a selection of Five Rivers’ most popular dishes to share - Daal Bukhara, Saag Punjabi, Chatpata Gosht and Lasani Chilli Chicken. They were served alongside some jeera rice, a freshly baked tandoori naan and a garlic & coriander naan - a necessity when dining in an Indian restaurant.

Featuring slow-cooked black lentils and kidney beans infused in Indian spices and a rich creamy sauce, the daal was mouthwateringly good and one of the highlights of the evening - comfort food at its absolute best. Our wonderful waiter, Mehtab, told us that in India, locals eat this for breakfast, lunch and dinner - and I can very much see why!

Next up, the Saag Punjabi. This dish was named number one in the Hello Curry Awards and is sold at major airports across the globe. Featuring spinach, green mustard leaves, onion, garlic and a whole host of other ingredients, it was truly exceptional; another dish that I'd be happy to eat at any time of the day.

Now for the meat dishes. The Chatpata Gosht featured lamb two ways - fillet and fine mince - slow-cooked with five selected spices. Well known for being a Kashmiri speciality, it boasted an explosion of traditional flavours. Last up was the equally tasty chilli chicken. A native dish cooked with fresh garlic sauce, coriander and crisp green chilli, the chicken was tender and the flavour delicious, boasting a subtle chilli kick.

Following an ever-so-tasty lemon, coconut & lime sorbet palate cleanser came the gulab jamun crème brûlée. A dish I’ve become very familiar with over the years, gulab jamun is a classic Indian sweet or dessert made up of milk powder balls which have been dunked in rose-flavoured sugar syrup. Gulab jamun are delicious enough on their own, but encased in a beautifully creamy crème brûlée, they’re absolute heaven! It was a perfect twist on the much-loved French classic.

I can’t recommend this gem of an eatery highly enough. From its magnificent food and sophisticated presentation to its friendly and attentive service, Five Rivers provided us with some of the best - if not the best - Indian cuisine we’ve ever experienced.