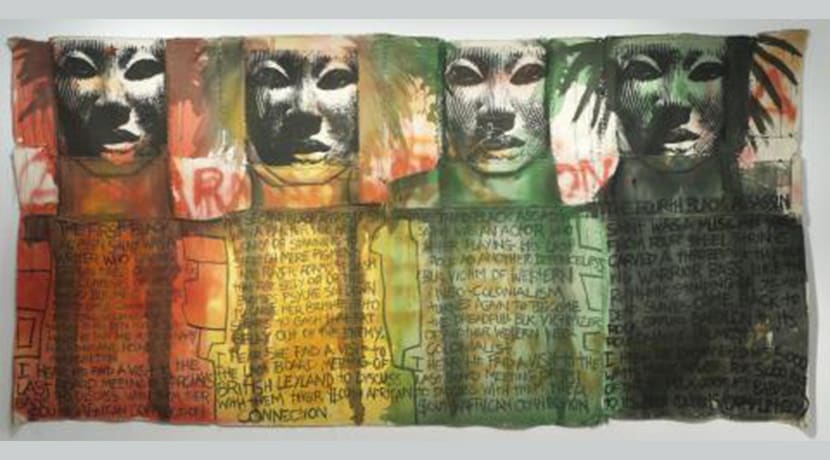 The exhibition, which will run from Thursday 10 October to Sunday 1 December, is curated chronologically, exploring recurrent interests in the artist’s work and is spread across 3 gallery rooms.

The pieces share the same starting point embedded in issues related to the ‘black body’, interlocked with the politics of the moment as well as examining various narrative strategies, including still and moving images, as well as written and spoken words and their evolution across 3 decades.

The first room will exhibit early, mainly large scale, 2 dimensional pieces on paper or unstretched canvases featuring hand written texts. They include ‘The Black Assassin Saints’ and ‘The Four Horsemen of the Apocalypse’. The second room will exhibit time based work from the late 1980s and early 1990s, including a video installation, slideshow, audio and computer based technologies that unfold to the viewers as they experience them.

The final room will feature more advance pieces that use current day technologies included a piece commissioned by Manchester Olympic Video Festival and the final piece in the collection, ‘The Perfect City’, which looks at urban space, history, mythology and the body.

Councillor Harman Banger, City of Wolverhampton Council Cabinet Member for City Economy, said: “Keith Piper has had a long standing career and has been a key player in the Black Art Movement and contemporary art.

“I am pleased to see that him and his art work will be returning to Wolverhampton to share his interest in history, the movement of people, the political angle, and introducing visitors to new technologies and how stories can be told through different art forms.

‘The exhibition gives visitors the chance to immerse themselves in Keith Piper’s work.”

Piper made some of his seminal works as a student at Trent Polytechnic in Nottingham (1980-83). In 1981 he exhibited at Wolverhampton Art Gallery in the ground breaking exhibition Black Art an’ Done as a member of a group of young artists of African Caribbean descent based in the West Midlands. It was the first show of what came to be known as the Blk Art Group, of which Piper is a founding member. The group went on to organise the self proclaimed First National Black Art Convention the following year at Wolverhampton Polytechnic, often cited as one of the key foundational moments in the development of the British Black Art Movement of the 1980s.

The free Keith Piper exhibition ties in with Black History Month in October and can be seen during gallery opening hours, Monday to Saturday (10.30am to 4.20pm) and Sunday (11am to 4pm).

On Wednesday 9 October the gallery will be hosting a private view from 5pm where visitors can be the first to see the exhibition and enjoy an exhibition talk and tour with the artist. Anyone interested should email art.gallery@wolverhampton.gov.uk or call 01902 552055.