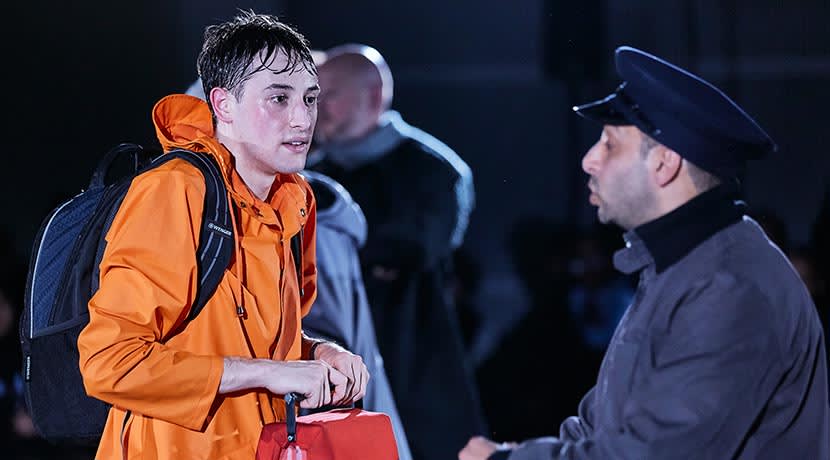 Following the success of last year’s nationwide schools tour, a specially staged version of The Curious Incident of the Dog in the Night-Time will be seen by five secondary schools across Wolverhampton in partnership with the Wolverhampton Grand this Autumn.

The tour forms part of the National Theatre’s drive to introduce new audiences to theatre, in a three-year partnership working with local theatres and schools. The tour will visit new schools in Wolverhampton as well as returning to schools previously engaged with as we continue to build relationships with them and introduce theatre to different age groups.

The tour will visit the following local schools from 30 September 2019:

The 90-minute version of the play is performed in the round and will be followed by a Q&A session for students with the professional company. The tour is accompanied by a learning programme which includes professional development for teachers led by the NT and Curious Incident movement directors Frantic Assembly, as well as curriculum-based resources and workshops.

Alice King-Farlow, Director of Learning at the National Theatre said, “The National Theatre is committed to increasing opportunities for students in Wolverhampton to see live theatre. Simon Stephens' brilliant play The Curious Incident of the Dog in the Night-Time is a fantastic first experience of theatre and we know from last year’s tour that seeing a live professional production in your own school hall can have real impact. We’re delighted that more students across Wolverhampton will experience the production in their school this year, and we’re working closely with Wolverhampton Grand to engage with new audiences and to build relationships between schools and their local theatre.”

Claire Hampton at the University of Wolverhampton which hosted local schools to watch the production, said, “The performance of The Curious Incident of the Dog in the Night-Time was spectacular. It was an excellent opportunity for our students to see the highest quality of work delivered in a space that is familiar to them.”

The Curious Incident of the Dog in the Night-Time brings Mark Haddon’s best-selling novel to life on stage, adapted by two-time Olivier Award-winning playwright Simon Stephens and directed by Olivier and Tony Award®‑winning director Marianne Elliott. The novel has won more than 17 literary awards and is widely studied in schools. Simon Stephens’ adaptation is a set text for GCSE English Literature.

The play tells the story of Christopher John Francis Boone, who is fifteen years old.  He stands besides Mrs Shears’ dead dog, Wellington, who has been speared with a garden fork, it is seven minutes after midnight and Christopher is under suspicion. He records each fact in a book he is writing to solve the mystery of who killed Wellington.  He has an extraordinary brain, and is exceptional at maths while ill-equipped to interpret everyday life.  He has never ventured alone beyond the end of his road, he detests being touched and distrusts strangers. But his detective work, forbidden by his father, takes him on a frightening journey that upturns his world.

The production is designed by Olivier and Tony Award-winner Bunny Christie and Tony Award-winning lighting designer Paule Constable. Movement is by Scott Graham and Olivier Award-winning Steven Hoggett for Frantic Assembly, music by Adrian Sutton (who also composed music for War Horse) and sound by Ian Dickinson for Autograph.  The Associate Director is Anna Marsland.

The National Theatre's Partner for Learning is Bank of America Merrill Lynch.