Storm the barricades! Les Misérables is returning to the Midlands... 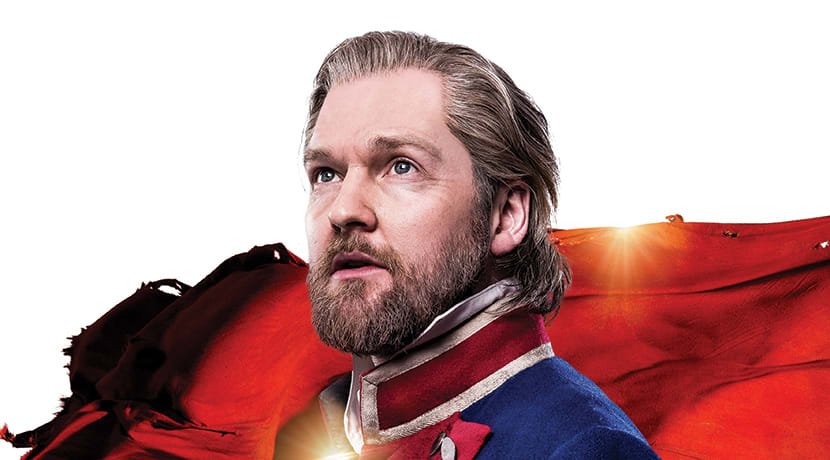 It’s been a whole decade since Les Misérables last visited the region, so to say that the production’s springtime return to Birmingham Hippodrome is eagerly anticipated would be something of an understatement.

On the eve of the show opening in Manchester, Killian Donnelly, who stars as Jean Valjean, chatted to us about all things Les Misérables ...

How does it feel to have made your way through the Les Mis ranks, from starting as a swing to now playing Jean Valjean?
I feel a lot of pressure but am loving every minute of it. Starting as a swing in 2008, I looked up to the Valjeans of the day and asked them questions, but now I’m the one being asked questions! I just try to relay my experiences to them rather than saying, “Well, when I played so-and-so…” It’s hard not to do that, but it’s an incredible baton to be passed. I’m loving every minute of playing Jean Valjean - it’s just so surreal that I’m now the older guy!

Who was Jean Valjean when you started with the production in 2008?
An American guy named Drew Sarich, who brought rock to the role. Drew came to work smiling every day, and smashed it out of the park at every performance. He didn’t go round trying to inspire, he just naturally did. Following him, there was Simon Bowman and David Shannon, but I will never forget Drew. He gave the same performance on a Wednesday matinee as he did on a Saturday night and had a real swagger about him. He was a rock star!

You’ve performed in the stage show, the O2 anniversary concert and featured in the film. Do you have a Les Mis highlight?
With the O2 concert, I was excited to work with James Powell, who’s our current tour director. I was able to see how he worked with a massive cast of 90, as opposed to a standard-size cast of thirtysomething. I played Courfeyrac (one of the students) in the concert, so it was a pleasure to watch James in action. Also, I managed to choose my moment backstage to speak to Colm Wilkinson - the original London Valjean and a special guest at the concert. He was so friendly, so encouraging, and asked me who I was playing in the show in town. I said Enjolras, and I had long blonde hair down to my shoulders at the time. He said, “Well at least you’ve got the hair for it!” It was nice Irish banter.

With the movie, my highlight was filming the barricade scenes. The director, Tom Hooper, had 60 extras dressed as peasants and students, plus five cameramen brought in about 20 minutes before the end of our call one day. We were stood on a purpose-built street in Pinewood Studios and Tom asked us to tear the place apart and build a barricade. So in 20 minutes, we ripped doors and shutters off their hinges, boosted each other up to get into houses and pushed pianos out of windows etc. We destroyed the place and couldn’t believe we were running around and getting paid to do it! The production team had built another barricade on a neighbouring sound stage, which was meant to come in at the weekend, removing our makeshift one. But ours was so good that they just put screws and bolts into it to hold it together and used that for the film. As we built it with our bare hands, I could say that I knew where that shutter came from, where that coffin came from or the elephant tusk that came from down the street there, on the right. Moments like that will never happen again, so it was very special.

Have you been able to watch the BBC TV version of Les Misérables?
I haven’t, but everyone’s saying how brilliant it is. There was a moment the other day when I was flicking through channels and saw the part where Valjean was going to meet Thénardier and Thénardier attacks him. His whole gang pin Valjean down to a table, but with his strength, he pushes the gang off and puts a hot poker to his arm. I saw that and thought it looked incredible. I’ve heard that Fantine’s story is stunning too and really shows what I Dreamed A Dream is all about. Things you can’t do on stage, you can replicate on TV and in film, so I’m dying to see it.

Do you have a favourite musical number in the show, either to perform or listen to?
Stars is the ultimate Les Mis moment for me. Ever since I was 23 and standing at the side of the stage watching Earl Carpenter sing it as Javert, it’s been a real pinch-me moment. I still have those moments today. One minute I’m talking to Katie Hall (Fantine) backstage about our dogs, then she goes on stage to sing I Dreamed A Dream and I think to myself, “That’s Fantine in Les Mis!” Also, when I grab Fantine and Éponine’s hands towards the end of the show, I look at Tegan Bannister (Éponine) and think, “Wow, it’s Éponine!” These things will never escape me, and it inspires me to love the show all over again.  But the first moment for me was definitely Stars. Even now, when I hear our Javert, Nic Greenshields, belting it out over the tannoy, it’s just incredible. I’m a huge fan!

You clearly still have an overwhelming passion for the show...
That’s Drew Sarich again. Drew spoke so highly of the show and loved every minute of it. I think even if you sound like a crazy fan, it’s important to love what you do. I don’t work for a living because I get to perform Valjean in Les Mis every night. It’s the show that keeps on giving, and once you get used to a moment, another one flashes up.

The last UK tour of Les Mis was 10 years ago, for the 25th anniversary. Why do you think it’s taken so long to get the show back on the road?
I think it was about not sending it round again too quickly. It allowed things to settle, and when the producers decided to put another tour out, they knew that people would be hungry for it. The last time Les Mis was in Dublin, for instance, was 23 years ago, with Colm Wilkinson, and it was the fastest-selling show at the venue this time around. Cameron Mackintosh has said that he’s still blown away by the passion which longstanding fans have for the show. I don’t think people can understand the power of Les Mis, especially in this version, until they see it. Also, I think people want to experience the cinematic feel of this new production.

Do you have an opinion about this new production of Les Mis replacing the original in the West End? It’s a decision that’s caused quite a stir...
I didn’t realise what a ruckus it had created until recently, when I heard about a petition going round. When you compare the amount of signatures on it to the fact that, in one show, we perform the new version to 2,500 audience members who’re on their feet at the end, I think people are generally commenting on something that they don’t know the full facts about. You have to give new things a chance. Les Mis has always been a stunning production, but if you’re able to add to it with new technology, why wouldn’t you? It’s got real colour, it’s fast-paced and is much darker. My mam is the first person to say she loves or hates something, but the one thing she said after watching this version was that the storytelling was a lot clearer. There have been standing ovations every night of the tour so far, so we’re really excited to visit other UK venues and find out what the public reaction is to the new version.

Most recently you’ve been playing Charlie in Kinky Boots, both in the West End and on Broadway. Donning heels every night seems a far cry from the French Revolution! Do you find it easy to switch from one character to another?
No, not at all. It’s unlikely that I’ll perform in a concert or release an album because I like to get lost in a character - as ‘actor-y’ as that sounds. Whatever’s going on in my life, I can filter it out in some way. Valjean is the biggest gift ever because he takes me through every emotion. I had to go back and film the screening for Kinky Boots in the Les Mis break between Leicester and Dublin, so I still had the Valjean look. When I put the boots back on, my lower back was the first thing to go because I realised I didn’t have the body for it anymore! I had a bit of a Ned Kelly belly going on and my calves were in bits! However, after about four or five hours walking around backstage, I got used to them again and muscle memory brought it back to me. Other than looking in the mirror and seeing Valjean, I had to almost separate myself from it and start being the English shoe salesman again. After finding a voice for Valjean, with my belly hanging out and needing to really use my diaphragm, I had to go back to singing Cyndi Lauper pop music as Charlie, which is using my upper chest. The musical director spent a long vocal session with me, and by the end of it, Charlie was back. But after filming ended, I only had one day of rest and then had to find Valjean’s voice again. It’s not like popping into one theatre and then another - it really strains you - but I wouldn’t change it for the world.

Are you looking forward to spending some time in Birmingham?
I can’t wait! I went to Birmingham to see my friend in Oliver! years ago, but I never got to experience the city properly. When I got offered the Les Mis tour, one of the main reasons I said an instant yes was so that I could see parts of the UK that I’d never seen before. When we get a proper sit-down for six weeks, like we have in Birmingham, I’ll be able to drive around with my dog and find different locations to take him for walks. Also, there are so many people I know who’ve toured before and who make suggestions about where to go, including bars to drink in and good places to buy your coffee etc. I’m really looking forward to it.”

Les Misérables shows at Birmingham Hippodrome from Tuesday 2 April to Saturday 11 May.