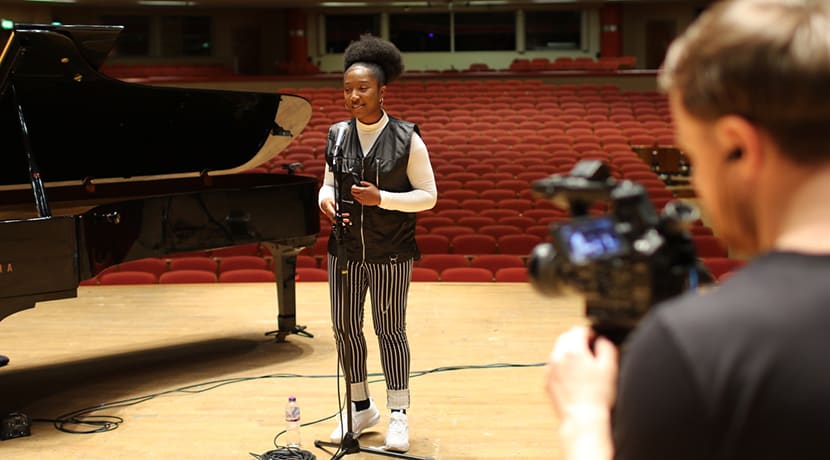 As concerts and are postponed to 2021 as a result of the coronavirus outbreak, Town Hall Symphony Hall has continued to bring live music to the people of Birmingham and beyond.

Digital broadcasts from Town Hall and Symphony Hall have amassed over a quarter of a million views since they began in April. Every Friday at 7PM through to November, an array of musicians will entertain online audiences with pre-recorded concerts from Symphony Hall.

Rapper and MC Lady Sanity has played to a global audience of one billion and has filmed a set with jazz pianist Ashley Allen as part of Town Hall Symphony Hall’s continued Watch Party Series. This unique acoustic performance will be broadcast on Facebook and YouTube on Friday 16 October at 7PM.

The 25-year-old’s biggest gig was performing her track Go the Distance at the closing ceremony of last year’s Commonwealth Games in Australia. A billion people heard the track she wrote in her bedroom in Erdington, using a converted boiler room as a vocal booth. And she feels indebted to Town Hall Symphony Hall for helping her get there.

Every Wednesday night for a year when she was 14, she came to Symphony Hall’s computer suites to learn about music production as part of an Arts Council scheme.

Three years ago she was part of the Inside Out project, which opened behind-the-scenes areas to the public. Sanity performed in the orchestra pit in a “cosy, atmospheric” gig.

Last year she attended a workshop for female producers and was able to help those with less experience.

Speaking at an event at Symphony Hall last year, Lady Sanity said: “It would be really difficult to make it without the support of places like Symphony Hall.”

“The future of Birmingham’s Town Hall and Symphony Hall, and our future as the music charity responsible for them, looks very different from the plans we began the year with. This period of closure has already resulted in huge losses and directly impacts the 18,000 young people and adults we introduce to a world of music every year.

“Throughout this global pandemic, many registered charities are relying on the generosity of their supporters more than ever. The digital performances and activities we have continued - and will continue to deliver - in these desperate times have been made possible with the support of Town Hall and Symphony Hall’s audiences.”

To find out more, including how to support, Town Hall Symphony Hall’s digital activities visit https://www.thsh.co.uk/join-and-support/the-future-of-live-music-in-birmingham