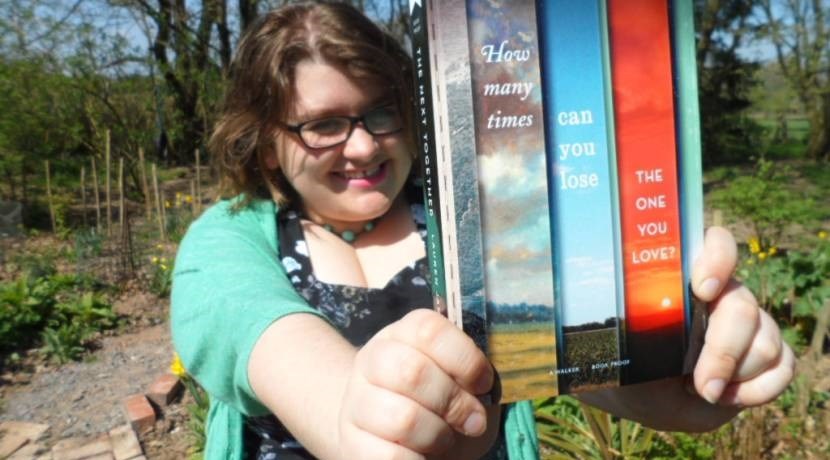 1745. A teenage girl of high social status falls for a Scottish servant boy at the height of the Jacobite rebellion in Carlisle. Almost 300 years later, in the aftermath of the Third World War, a couple of university students uncover a devastating government plot and risk their lives to intervene. Katherine and Matthew, Matt and Kate; in The Next Together, two young lovers are destined to be born again and again at key moments in time, repeatedly altering the course of history forever.

With the book's sequel, The Last Beginning, due for publication in October, Berkswell-based author Lauren James will be appearing at the Big Comfy Literature Festival in Coventry's FarGo Village next weekend. Along with fellow YA writer Rhian Ivory (The Boy Who Drew The Future), she'll be speaking on a panel about historical fantasy fiction, taking place at 2.45pm on Sunday 11 September. What's On spoke to James about the rise of YA novels, writing her first book and the advantages of genre-bending.

“All plots have been written hundreds of times before. There are no new ideas. Combining old plots in new genres, however, can give that twist which makes it feel original,” she said. “The Next Together series is ridiculously every genre, almost. It’s a historical drama, a conspiracy theory thriller, a science-fiction adventure, and plenty more besides. I did that because as a writer, I would get bored by focussing my whole attention (for over a year per book!) on one genre. As a reader, I feel the same. I want to be challenged and read fresh ideas.”

Like The Hunger Games and countless other YA series that have emerged in recent years, The Next Together combines elements of romantic and science-fiction plots, giving it the potential to reach a wider audience, breaking free of the conventions of genres all-too-often divided along gender lines.

“The Last Beginning was born out of an unanswered desire to find realistic females like you usually only find in contemporary fiction in the male dominated genre of SFF,” James explained. “I want to read diverse, fresh and socially conscious stories which represent the reality of the world I live in. It may be aimed at teenagers, but YA is on the cutting edge of fiction, taking risks to do new things which other areas of publishing have never done.”

As young readers begin to forge their identities in a complex and constantly changing society, it's unsurprising that YA fiction is increasingly tapping into the difficulties they face in navigating this brave new world. Reflecting teenagers' real-world concerns is a responsibility that James and other YA authors take seriously.

“The YA reading community is so passionate and socially aware, and that demand online for better and more respectful diversity has encouraged more publishers to buy diverse books, meaning that YA books are on the forefront of change – one example being the huge increase in LGBT YA literature in recent years (like my second novel The Last Beginning, which has a lesbian relationship). YA authors write things which children read, things which can shape their views for life. The authors of YA have a huge responsibility to their young readers, and I think being aware of that responsibility creates very well-crafted books. Things happen more rapidly and collaboratively here than anywhere else.”

Nevertheless, The Next Together is far from exclusively focused on the teenage world. As Matthew and Katherine reappear at different periods in time, they're forced to deal with the horrors of war, spying, foreign correspondence, conspiracy and political division. The book is also peppered with references to an independent Scotland and the UK's troubled relationship with its European neighbours, apparently drawing on some of the major issues affecting our country today.

“There was a tense time when the Scottish referendum happened, because it was a month or so after the book had officially gone to print. If the result had been different, and Scotland had left the UK in 2015 instead of in the future like in the book, then the politics in TNT would have been out of date before it was ever published! Interestingly, the same thing happened with The Last Beginning – the book is set in 2056, when the UK is separate from the EU and has been at war with them for years. After the book was all completely finished and ready to be printed, Brexit happened! Apparently I’m great at accidentally predicting a lot of British politics!”

Scottish independence and war with Europe isn't just part of a potential future in The Next Together – James also uses instances of conflict and rebellion in the past to reflect on their potential impact. But despite setting large chunks of her story in bygone centuries, James says that she knew very little about history before she started writing.

“The Next Together includes two storylines set in the past, one in 1745 and one in 1854. I was a student when I started writing as a hobby, so I didn’t want to spend any money on history textbooks. I actually chose the timelines in the book based on which I could research for free, mainly using my university library and primary sources available to access on Google Books. It seemed to work out quite well! I was very naïve when I started writing, and definitely didn’t know what I was getting myself into. I was a very frequent visitor of Wikipedia. I spent a lot of time reading old books and diaries and making endless notes. It was definitely worth it though – I hope it adds more realism to the time periods.”

As well as multiple timelines, the book is also set in several different locations, including Carlisle, Nottingham University and a laboratory in an unspecified area of the West Midlands, as well as in war-torn 19th-century Crimea.

“I went to the University of Nottingham and live in the West Midlands, so both of those locations were just shamelessly stolen from my life. In my head I was imaging the CSL building as something similar to Warwick University’s science research facilities outside campus, where I did some research whilst I was at school,” she explained. “Carlisle is the location of the last castle in England to actually come under siege, which I thought was really interesting. It’s almost on the very border of history between medieval and modern warfare. It worked as a great contrast to the futuristic settings of Kate and Matt’s other lives.”

Growing up in Coventry, James made frequent use of the city's libraries, both for leisure reading and for research. As financial cut-backs bring the library service increasingly under threat, James remains a passionate advocate for the value of local libraries.

“I love and constantly use Coventry Libraries. I read, without hyperbole, every single book in Coundon Library as a kid. I used to get the maximum number of books out on my library card and my mum and dad and brother’s, and bring all fifty of them back a week later for more. The recent and upcoming closures make me unspeakably sad, especially that there are children today who are losing out on that local resource that basically made me the reader and writer I am now.”

It wasn't long before this early passion for reading sparked an interest in writing her own stories, and James has been working through many of the ideas that would eventually come to fruition in The Next Together since her school days.

“I’ve been thinking about a couple who are reincarnated throughout history since I was about sixteen, and always wrote about them during Creative Writing assignments at school. It stuck with me long enough for me to actually start writing the full novel when I was eighteen and at university, so it’s been with me for a very long time!”

Upon finishing the first draft of her novel at the tender age of 19, James was lucky enough to find an agent and a publisher very quickly, despite not having much of a plan about how to go about finding one! It's testament to the strength of her ideas that the book was snapped up so enthusiastically without much knowledge of pitching and publishing processes on her part.

“I had absolutely no idea how the publishing industry worked. I think I read one How To article on query letters before writing one and blithely sending it off into the aether! I found an A to Z list of agents and started emailing with the Z’s, because I thought they’d have the least submissions. In the end, I found an agent on W, after I’d emailed only six agencies. It was a very naive way to apply, but I got very lucky – my agent is incredible, and last year she was shortlisted for the Bookseller’s Agent of the Year award! We then submitted to publishers after a whole year of revisions (I was still at university so could only really work on it during the holidays) and within two weeks two publishers had offered! Saying it now, that seems so easy and fast, but at the time it was the most stressful, delirious fortnight of my life. I’ve been through the submission process several times since then, and it does not get any easier.”

Set to arrive in shops on 6 October this year, the sequel to her debut novel, The Last Beginning, will follow the story of Clove, a girl who dreams of travelling through time in a machine being built by her parents. It follows the release of a free e-novella earlier this year, set in the same universe and titled Another Together.

“It's a duology, so this book will be the end of the series, but who knows what will happen in the future! I’d love to write more books set in this world,” she said. “I have a few other projects coming up, but they haven’t been announced yet, so I can’t say much more than that I’m sticking with science fiction, and focussing on a thriller next.”

Lauren James appears with Rhian Ivory at FarGo Village's Big Comfy Bookshop on Sunday 11 September at 2.45pm. Her second novel, The Last Beginning, will be released on Thursday 6 October, and is published by Walker Books. For a full line-up and updates on the Big Comfy Literature Festival, visit facebook.com/events/990963024285218.