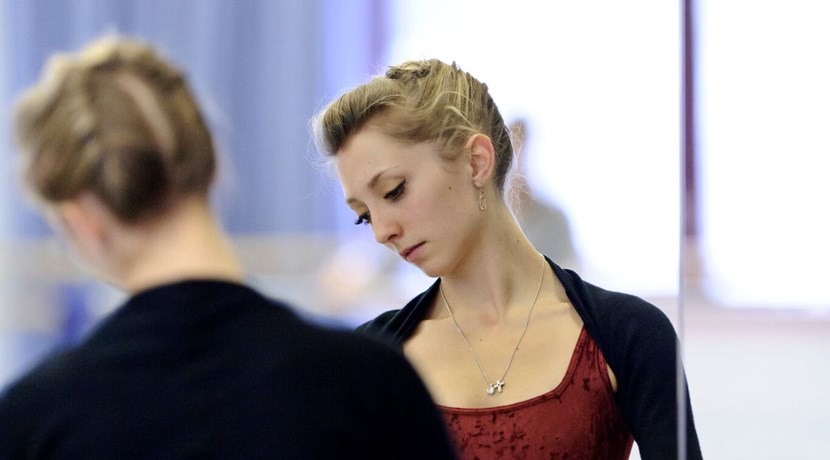 In the utopian gardens of Arcadia, god of the wild, shepherds and rustic music Pan rules over a court of peaceful and obedient beings. But even in this virtual paradise, all is not perfect - the satyr god himself is struggling to resolve the conflict between his animal instincts and higher human consciousness.

Premiering at Birmingham Hippodrome this month as part of a BRB triple bill, Ruth Brill’s brand new ballet shows Pan beginning to explore his human side with the help of the beautiful moon goddess, Selene.

We spoke to the BRB First Artist and choreographer to find out more...

“I found his dual nature really fascinating,” says Brill. “He’s half-man, half-animal, and I would say the ballet is a kind of character exploration of Pan, rather than telling a story. He begins in a very animalistic state, prowling around the forest and lusting after nymphs who aren’t interested in him. Then we go into the daytime and see a kind of Greek chorus worshipping him, but when night falls they all run off and he’s left alone. I wanted to show this insecure, vulnerable, almost adolescent side of him. There’s no one else like him, and he experiences this rejection, so he’s quite lonely.”

After an angst-ridden solo, Pan falls asleep, only to be woken again when the ethereal moon deity descends from the sky to meet him. Taking pity on his loneliness, she offers him her guidance, teaching him how to interact sensitively with others over the course of their duet.

“He’s entirely in awe of her because she’s so completely different to the nymphs or the chorus or anyone else he’s ever seen. She comes to help him to be a better leader, particularly in his interactions with women, teaching him that he has to be gentle and treat them with respect. From that point on, we see that Pan has changed and become more human.”

Pan’s deep connection to the idyllic, pastoral land that he inhabits means that the change in him is mirrored in those around him. In addition to the two lead dancers, Pan and Selene, there are three nymphs drawn from Pan’s retinue in Classical mythology - Pitys, Syrinx and Echo - and an additional five couples to form the chorus.

“In the second scene, the chorus dance as quite a formal, functional group. I see them as a very obedient society. Later, you see the change in Pan reflected in the chorus. Their movements become more connected - they dance more individually but also in couples, so it feels a bit freer. I think that’s probably reflective of society. When you have a leader who is more respectful and who interacts and listens to people, then everyone feels more connected and content.”

The idea of exploring the character of Pan emerged from the original music by John Harle, which has been specially adapted for the ballet. A renowned saxophonist, Harle originally composed Arcadia as a stand-alone score for a trio of violin, piano and sax.

“I remember the first time I played the CD, it was like nothing I’d ever heard before. It’s so atmospheric, and it really does create another world - a mythical land that I could visualise. But although it’s very different to anything I’ve ever worked with before, it’s also very theatrical. There are parts that are quite fun, like when the chorus are worshipping Pan, and towards the end it becomes really joyful. There are also moments that are almost rock’n’roll, so there’s a lot to work with!”

Harle has remained closely involved with the reorchestration process - providing Brill with a rare and exciting opportunity to work directly with her ballet’s composer. Moreover, he’ll also be playing saxophone during the Hippodrome performances.

“That in itself is such a masterclass! His playing is incredible, and all the different techniques he uses have heavily influenced Pan as a character. I’ve really enjoyed working with him. He’s been brilliant in terms of talking through everything, and he’s so flexible and responsive. He’s also a fantastic man - really humble and great fun as well as hugely talented.”

While the main focus of the ballet may be the central character, as per the title of both the show and the music, evoking the world that he inhabits has been equally important. To do that, BRB enlisted the help of ‘exceptional’ Birmingham City University student Atena Ameri, who has taken a year out to work on the project.

“She’d never seen a ballet before, but she’s got an incredible eye for colour and her designs are just beautiful. She has an amazing ability to draw and communicate her ideas, and they’ve definitely taken me to places I wouldn’t have gone otherwise. This wasn’t the sort of project where you could take a risk on someone, but her portfolio was great and she’s been a dream to work with.”

Helping her get to grips with some of the more specific requirements of ballet have been established experts like BRB Head of Costume Elaine Garlick, Scenic Artist John Goodwin and Lighting Designer Peter Teigen.

“We have this backcloth painted by John Goodwin with trees and vines and archways, and it’s a masterpiece! When it’s lit from the front, it’s really bright and all the colours stand out. But it completely changes with different lighting, and when it’s lit from behind, you see the silhouettes which I use at the beginning. So even though it’s just one cloth, it’s really versatile and creates so many different environments.”

In previews of the show which ran at Truro, Poole and Cheltenham, however, it was the vibrant, rainbow-coloured costumes that really created a stir.

“A lot of very ambitious things have been done with them - dyeing techniques and things like that. There are lots of colour-changing, ombré effects. The main inspiration for the costumes was the colour palette, and I think that’s something that really hits you, especially at the end when everyone is dancing together in this kind of kaleidoscope. I’m so happy with the results!”

Warmly received by those who attended, Arcadia’s previews saw it run in a trimmed-down version as part of a different triple bill, alongside Shakespeare-themed ballets Wink and The Moor’s Pavane. For its official premiere, though, it’s set to be even more spectacular, filling the larger Hippodrome stage and orchestra pit with extra dancers and musicians.

“I’ve always thought it’s a bit unfair that plays and musical theatre have these previews but in dance we don’t often have that. Because really, you don’t know how it’s going to feel until you have all the elements together in front of you, as well as an audience to respond. I’ve changed odd bits but also it evolves and grows with the dancers as they start to feel comfortable with it. But this was always the venue that I had in mind, so I’m really excited to bring it to the main stage and see everything at its full capacity.”

The triple bill also features the comic, Gilbert & Sullivan-inspired Pineapple Poll and Le Baiser de la fée (The Kiss Of The Fairy), a dance based on Hans Christian Andersen’s Isjomfruen (The Ice-Maiden).

“We did Le Baiser de la fée years ago, but it will be new to the Hippodrome audience, so to share a programme with that is great. The fantastic thing about these triple bills is that you can have a really balanced programme so that there really is something for everyone. Even if you’ve never seen a ballet before, it’s great because it’s kind of an education seeing a whole evening of different works.”

Arcadia premieres at Birmingham Hippodrome as part of a BRB triple bill from Wednesday 21 until Saturday 24 June.