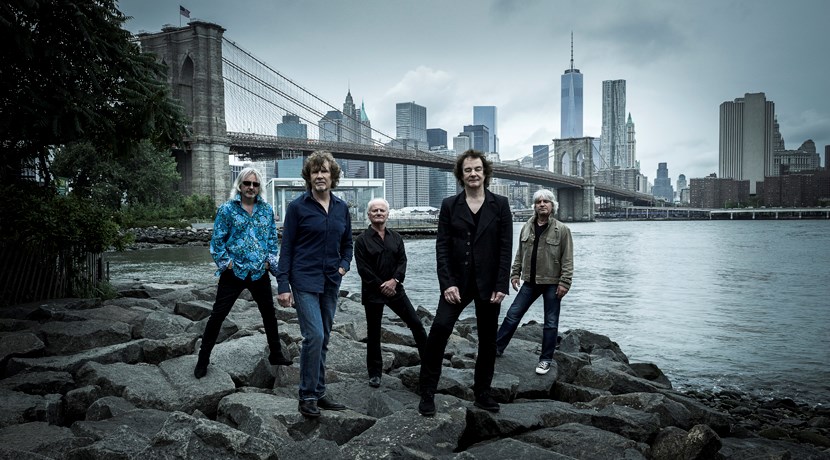 Signing to Decca after winning a major talent contest, The Zombies scored a massive hit with their self-penned debut single, 1964's She's Not There. But when follow-up singles failed to chart, the touring - and therefore the money - dried up, and the beat group split, just as their second album, 1968's Odessey and Oracle, was released. Featuring the hit Time Of The Season, the album's reputation has grown, and it's now regarded as one of the best albums of the 1960s. Colin Blunstone went solo an joined the Alan Parsons Project while Rod Argent fronted rock band Argent, but The Zombies reformed in the early '00s and have since released four albums, including 2015's acclaimed Still Got That Hunger.

When and how did The Zombies start?
We started in Easter 1961. We all met outside a pub, on a corner [in St Albans, Herts]. I had been desperate to form a band, I was 15 at the time. Jim [Rodford] who I later formed Argent with, was in a skiffle and electric group at the time, The Bluetones, and they were one of the best groups in the South of England. I was in love with their gigs. At school I wanted to form a band, and a mate who’d built his own bass guitar, who was from a different school, said about this guy who played guitar and sang a bit, and that was Colin [Blunstone] – I’d never met him before. So we met outside The Blacksmiths Arms in St Albans and went down to The Pioneer Club. That was our first rehearsal. Jim loaned us his equipment, which we were made up about, and we had everything going into one 30 watt amp  – including the vocals!

You built up a strong local following over the next couple of years, but what led to the deal with Decca?
When it came to leaving school, I didn’t apply to university until it was too late because I really wanted to make a go of it. Then we played Herts Beat competition in Watford, in the Town Hall there, and that was amazing. Shane Fenton – who later became Alvin Stardust – was one of the judges.

She's Not There was a huge UK (and US) hit in 1965, but you never had another hit over here - despite some great singles. So how did you manage to record and release Odessey and Oracle?
We felt that the band might split up. We’d been frustrated by the production of the records, we felt that the balls had been taken out of them, so we wanted to do it ourselves. CBS gave us a small budget to produce ourselves.

But The Zombies broke up before the album came out ...
There were rumblings in the band, so we said let’s put out the first single because we were proud of the album, it the best we could do ... we are proud of it. But the single wasn’t a hit and we broke up.

Odessey and Oracle made little impression in the UK, yet was released in the US - how did that happen?
Al Kooper came over [to the UK] and he was a real hot-shot, he’d done the Super Session [with Stephen Stills and Mike Bloomfield], Blood Sweat And Tears, he’d played on Bob Dylan’s Like A Rolling Stone. [Record company boss] Clive Davis had employed him as his A&R man. He picked up literally hundreds of albums over here and said that this album – Odessey and Oracle – ‘stands head and shoulders over all the others, I don’t know who owns the rights, but we have to get it!’ Clive said, ‘we own the rights and we passed on it.’ They released Chris White’s song, Butcher’s Tale, which was about World War I and was never a single – that was crazy!

Yet Time Of The Season eventually became a sleeper hit in the US. Although The Zombies didn't reform, did you manage to capitalise on the single's success?
Me and Chris [White] went to the States and went to CBS to get a production deal. We signed two acts - Colin Bluntstone and Argent - and we did One Year [1971] for Colin. It had a Denny Laine song on which was a hit, Say You Don’t Mind.

When did you first get the idea to reform The Zombies?
It was because of very good friend of mine, John Dankworth – who is no longer with us now. It was late '99/ 2000 and he asked me to do a little concert for The Stables in Milton Keynes, ‘you’re totally involved in music…’ I’d not done gigs for years, so we did a bit of classical, a bit of jazz, some Argent and we also did some Zombies songs. I looked out into the audience and there was Colin, so on the spur of the moment, I got Colin up and it felt like we’d only been on stage together two weeks previous. Afterwards Colin said ‘why don’t you do half-a-dozen solo gigs with me? Go on!’ and we had such a ball! It was very very slow. We kept away from anything Zombies - it was not a cynical exercise, we were just having fun playing again, but as it became more frequent, why not play this [Zombies'] song? There were all these songs that we’d never played live before we’d broken up. It felt exciting and then we dipped our toe into new material. That’s when we really embraced it as it felt like everything we did when we first began – things like that, that makes you feel like you’re flying the flag for The Zombies again …

Would you consider reforming Argent?
Doing one thing is really important to me, I don’t want to rake over past embers, I want to do something that’s a vital living thing. I had the biggest kick last year [on The Zombies’] last tour of America – Billboard called and said we’d entered six Billboard Charts and we were at 100 in the Top 100. We were selling records, and that was the first time in 50 years when, for 20 minutes, we were huge. That lineage – from then until now – is a huge kick for me. I can’t take anything more on than one band. Argent did return a few years ago – time whizzes by – for the High Voltage Festival [London, 2010]. We were asked to do one spot. There was no way I could get together everything because we were part of that progressive thing and nothing was ever written down. So we did more of the straight-ahead thing, like It’s Only Money – but with lots of places to play. We did a little low-key tour, and that was enough for me.

What do you think has been the appeal of The Zombies ... why the band's reputation has grown so much over the decades?
I never know for sure, but I say that we never tried to jump on the coat-tails of fashion. When we did something we tried to make it work, we tried to make it work for ourselves, we did it honestly. It was luck if you got played on the radio, and it reached out to someone and they felt strongly enough about it to pay 6/9 pence, or whatever a single cost then. And that’s how we still do things – honestly. An idea has a spark and it excites us and we work it through until it works. In the ‘60s we were at a disadvantage as everything was seen in immediate terms, and we did not get that instant air play. It took a bit longer, which was a bit of a disadvantage [at the time] … but in the longer term it means that our songs don’t sound as dated as much as some other records. We came from an honest point of view, with enthusiasm and excitement.

Did you ever think The Zombies would have such an impressive career?
We’re always getting young bands coming to see us, in America and Japan especially. You look out across the audience and there are all these younger faces alongside the older ones. It’s great. This thing that was done all that time ago and people still relate to it. Back then, you only thought something would have a six month shelf-life, and never any more than that. I was talking to Graham Nash [from The Hollies and Crosby Still and Nash] last year and we were talking about that. Who’d ever had thought that we’d be meeting up 50 years later, doing new stuff and still playing the old stuff? If you’d have said that to us 50 years ago, that’d we’d be doing this still, we would have not believed it. That was the time Lennon said that he didn’t expect to be still doing it when he was 30! [laughs]