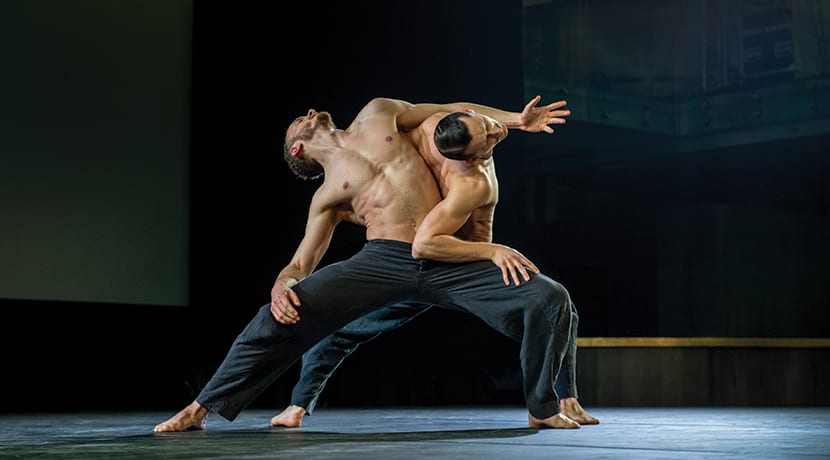 Award-winning dance ensemble BalletBoyz bring their production, Them/Us, to the Midlands this month. What’s On caught up with long-serving dancer Harry Price to talk about the show and the company’s approach to classical dance...

Co-founded by ex-Royal Ballet dancers Michael Nunn and William Trevitt, BalletBoyz burst onto the UK dance scene in the year 2000. The male-only group has since played an important role in revolutionising classical dance by focusing much more on its fusion with the contemporary.

Their contribution hasn’t gone unnoticed either, with numerous coveted awards coming their way, including the National Dance Award for Best Independent Company in 2013.

“I’d dreamed of being in BalletBoyz ever since I was in training,” says Harry Price, a dancer approaching his fifth season of working with the ensemble. “It’s a company I always aspired to be a part of, so I was thrilled when I got the job. Since then, BalletBoyz has continued to captivate me because we’re constantly evolving and changing. We create a lot of original work, collaborate with different musicians and artists, and work with new choreographers. We have such a wide span across the arts industry, meaning that as dancers we’re given amazing opportunities. This year we even performed at Glastonbury! Plus, we’ve done the West End and Edinburgh Fringe.”

Harry believes it’s the ability of BalletBoyz to evolve that’s the key to the company’s success: “We’re constantly pushing the boundaries and aiming to take a fresh approach to contemporary ballet. BalletBoyz is always committed to doing something new and is constantly adapting to do so. In that way, I think we’re keeping ballet very relevant. Regular audience members say that they always know our show will be great, but they never know quite what to expect. It’s a good thing that we’re consistently surprising audiences and expanding our horizons.”

“The first half, Them, was actually created by us, the dancers - we worked together to come up with the piece. We’ve got a real sense of ownership of it, which is really lovely. It’s a really fun piece, and because we’ve created it, it seems to have all of our different personalities shining through in there. Charlotte Harding, who created our accompanying score, was actually in the studio with us while we were choreographing, so it was a really collaborative process. And I think that’s very evident in terms of how well the movement of the dance and the music marry. We’re also wearing lovely shiny ’90s tracksuits, which is fun to see!

“The second half, Us, is by Chris Wheeldon. He’s predominantly known as a classical ballet choreographer, so there’s a real contrast in style. Our half is a lot more contemporary and Chris’s is a lot more traditional, with more classical elements, but obviously still with that contemporary edge BalletBoyz is known for. The Us piece concludes with a duet that was choreographed for us by Chris back in 2017. So for this production, we extended the duet into a full-group piece. It’s been really nice to return to and revitalise something we’d already done.”

Them/Us is about relationships forming and breaking on stage, particularly between groups and the individual.

“Like with all our shows, the story is very much open to audience interpretation. The show is just as much for them as it is for us. A BalletBoyz production is really about what each individual takes away from it. I guess the title of Them/Us alludes to the contrast of the two pieces, and the fact that they’re choreographed by different creatives. A lot of people have said that, in Us in particular, there’s this idea of the outsider character, and of exploring what it means to be part of a group or to be excluded from it. That’s definitely a theme that runs through both pieces.”

Harry believes Artistic Directors Michael Nunn and William Trevitt have had an in-company piece in their sights for a number of years: “I think it was just a case of waiting for the right timing and the right group of dancers. They obviously thought it was a great time to go for it. They’ve seen that when we do work with choreographers we take a very creative stance. It’s always a risk, though, because in-company creations have a history of not working so well. But I think this one’s worked out!”

BalletBoyz prides itself on its mix of dancers: “We’re all so different, with such different personalities and backgrounds. Some of us are trained in classical dance, others more in contemporary, and some didn’t start dancing until much later in life than you might expect of a professional dancer. It’s for those reasons that we all have such different visions, making the company so successful and the creation of Them sometimes a little problematic. But we’re all very close and incredibly proud of how the piece turned out.”

Even when working with renowned choreographers such as Christopher Wheeldon, Javier de Frutos and Craig Revel Horwood, the BalletBoyz dancers are able to get creative: “Working with Christopher was like a dream come true. I was trained classically so was very aware of his work. That’s another thing I love about BalletBoyz - our approach to working with big-name choreographers is very collaborative. I’ve never worked with a    choreographer at BalletBoyz who’s had no room for movement; it’s always a conversation, with free rein to put ourselves into the piece.”

Harry hopes that contemporary ballet companies such as BalletBoyz are able to encourage more people to attend ballet performances: “BalletBoyz prides itself on being very accessible. We’ve had people who’ve never seen ballet before give very positive feedback after our shows - even those who were sure they wouldn’t like it. One of the company’s main goals is to create dance that’s for everyone, so we definitely banish those misconceptions of ballet being stuffy. So I would encourage anyone who’s worried about not liking traditional ballet to push that from their minds and come to see BalletBoyz!”