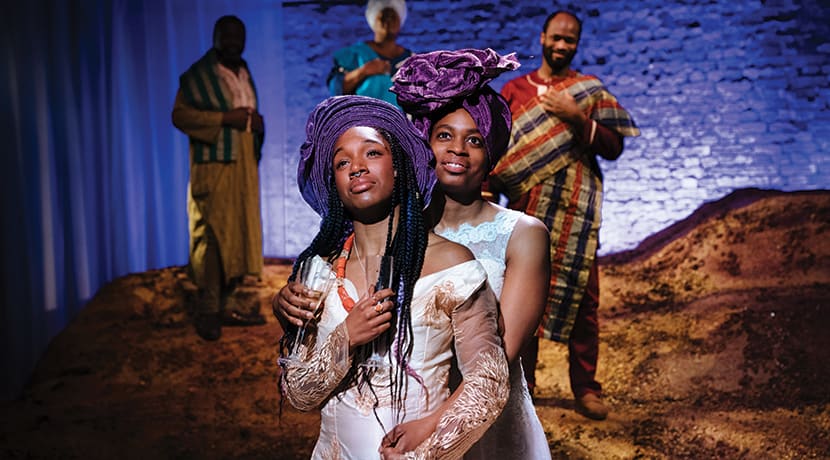 British-Nigerian family drama The High Table plays out between the heavens and earth while exploring queerness and tradition through humour. What’s On caught up with the show's writer, Temi Wilkey, ahead of the production’s run at The REP, Birmingham…

Tara and Leah are two women madly in love. Their perfect Nigerian wedding in London is fast approaching, but there’s a spanner in the works: Tara’s parents are refusing to attend. Watching over the unfolding drama from way above are three of Tara’s ancestors, roused from their eternal rest to keep the family together...

The High Table charts the conflict between queerness and heteronormative expectations, showing how it affects the same-sex couple and Nigerian family at the play’s centre.

“The main thing that doesn’t match up to Tara’s family’s expectations is that she’s marrying a woman,” says The High Table’s writer, Temi Wilkey. “I think Tara’s parents have very much been in denial about her relationship, as it doesn’t fit with what they hoped for her. They’re hoping that this relationship will go away and that eventually she’ll settle down with a man. I can definitely relate to the feeling of worrying that your relationship doesn’t quite marry up with your family.

“A lot of The High Table explores queerness and tradition through humour. I want to unpack prejudices with a laugh and a bit of love! The High Table also explores how dangerous homophobia can be, especially when we go to scenes in Nigeria, as homosexuality isn’t legal there, but also by exploring pre-colonial attitudes to queerness in Nigeria through the presence of Tara’s ancestors in the play. That also gives it an element of magical realism that can be fun for me as a writer and for the audience.”

What Temi and other artists firmly believe to be systemic bias in the world of theatre and wider storytelling threatened to derail The High Table even before it was written.

“Grayson Perry talks about The Default Man - a theory of sorts that explains what kinds of stories ourselves and the media see as important ones to tell. Theatre buys into that idea of appealing to the ‘norm’: the white, straight, male audience. That’s why there are so rarely stories about anything outside that. Often, women’s stories are quite difficult to get on stage anyway - let alone a story about a black queer woman like in The High Table. The Default Man really is about systemic bias, how that happens and how it affects the arts and other parts of society.

“I think non-straight writers and those from ethnic minorities do hold back from topics they really want to write about because of this bias, as they believe it won’t get staged. Playwrights also don’t seem even to notice that they don’t feel empowered to write certain stories. I was part of the Royal Court’s Introductory Writers Group in 2017 and we had the brilliant Darren Chetty come and speak to us - he was one of the contributors to the bestselling book, The Good Immigrant. It was really useful to hear him speak.

Something like 97% of children’s books depict only white children. So even from a really young age, you’re seeing stories about white boys and hardly any ethnic minorities, let alone as you get older and want to see something on stage. I think people feel discouraged from telling these stories, but don’t even recognise that they do. It’s something we need to unlearn, and recognise that our stories are just as important as anyone else’s.”

How did we get to this point, then: from believing The High Table would never be staged to having it programmed in two different cities?

“We had a rehearsed reading of The High Table this time last year, which was with a brilliant playwright called Tom Wright, who had a play running at Park Theatre in London. He was giving opportunities for queer writers to have a rehearsed reading of their play. Tom mentioned the play to Bush Theatre when he came in for a meeting. He really championed it! I was also rehearsing here around that time for an acting role. Things went from there. I think when I fully realised it was programmed and it got closer to the play opening, I wanted to make sure that I did all the different identities within my writing justice. But I think the most important thing is that I’m writing something that feels true to myself.”

As such, bringing The High Table to the stage means a great deal to Temi. And even some of her initial worries have been dispelled.

“You don’t often see Black British stories on stage. Often, if you do see Black theatre in London, it’s African-American - and I think it’s really important that a Black British person can see themselves reflected on stage. We exist and we matter. That’s the really rewarding aspect of staging The High Table. I think the challenges are that certain things could be lost. For example, the characters speak in Nigerian Pidgin English, and that was something I was worried about because I obviously want my audience to understand what I’m trying to say. But I think because the actors play their parts so well and audiences are always cleverer than you think, it has worked out.”

Having trained with the National Youth Theatre REP company and boasting impressive acting credits, including BBC & HBO British drama Years And Years and multiple productions at the Royal Shakespeare Company, does Temi think acting has influenced her writing?

“Being an actor is such a huge part of myself that it’s hard to unpick where personal influence ends and professional influence starts in my writing. When people have said very nice things about my writing, they say that they can tell someone who acts has written it because the dialogue is quite fun to say. Being an actor, there are characters in The High Table that I could definitely play. I want to write stories that I would want to act in, so I think that informs how and what I write.”

Most of all, Temi hopes her play has an immediate and lasting impact: “I hope The High Table makes people laugh! I also hope it’ll make people think and change their perspective on queerness and Africa. Queerness in Africa was around long before colonialism arrived, and it was colonialism that brought homophobia to the continent. I want The High Table to feel like a gift to queer people, especially queer people of colour.”

The High Table shows at The REP, Birmingham from Wednesday 25 March to Thursday 9 April. Tickets are on sale here