Charlie Adlard chats about his involvement in Comics Salopia 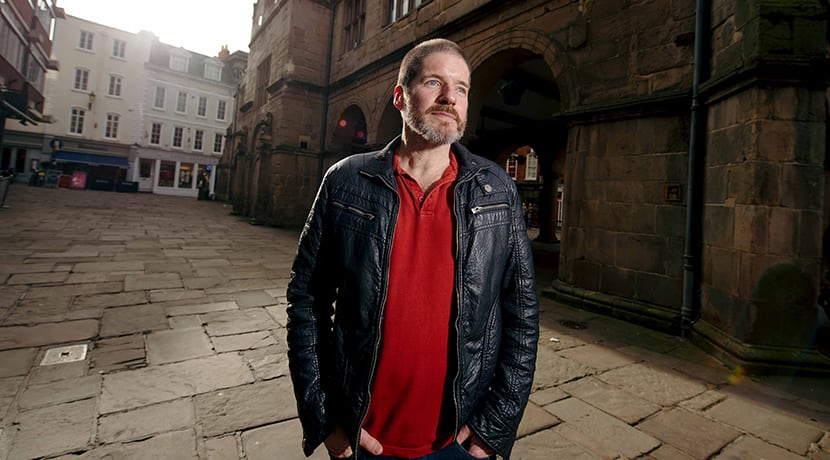 Judge Dredd, The Beano and The Walking Dead are just some of the iconic publications showcased at a brand new event coming to Shrewsbury in early June.

Described as ‘a festival with a difference’, Comics Salopia will celebrate comic art and its associated wider culture with a series of events at numerous venues across the Shropshire town.

The festival is the brainchild of former Mayor of Shrewsbury, Councillor Jane Mackenzie. Conscious of the need to create something unique for the town, Jane approached local comic book artist Charlie Adlard with the notion of staging a comics event.

Charlie has been the artist on the hugely successful zombie apocalypse comic book  series, The Walking Dead, for the past 15 years.

“My favourite conventions are not ‘conventions’, they’re festivals,” says Charlie, “and there’s a fundamental difference between a convention and a festival. Festivals are celebrations that should be open to everybody.”

A self-confessed devotee of French comic books, Charlie drew on Gallic inspiration for what could be achieved in Shrewsbury.

‘There’s this amazing festival in Angoulême, France, and it’s one of the biggest in the world. It attracts over 100,000 people to a town that’s not too dissimilar in size to Shrewsbury. I said to Jane, ‘If we’re going to do it, that’s how I’d like to see it done; involve the town, be all-inclusive.”

An interactive exhibition of Charlie’s art - featuring original artwork from a complete issue of The Walking Dead - will form just one of the many attractions at Comics Salopia.

“We’ve got events going on in the prison, the castle and the Guildhall. Loads of shops will have displays, there’ll be stuff in the Square, and we’ve got a big Judge Dredd experience happening in the prison. The object is to take over the town and turn it into comic books central.”

Many visitors to the two-day festival will have grown up in a world of comics rather than comic books, with titles such as The Beano introducing generations of readers to the likes of Biffo The Bear and Lord Snooty. Comics Salopia’s An Audience With The Beano promises to be an amusing discussion on the enduring success of one of Dundee’s finest exports.

For Charlie, the Beano event exemplifies the broad appeal of the festival: “We’re trying to say, ‘Comics are for everyone, whether it’s The Beano, Dandy, something from Redan [Publishing] - the local publisher that does pre-school and young kids’ magazines like Peppa Pig - through to Marvel Comics, [Japanese] manga, French comics, underground comics, everything. We’re trying to embrace the whole culture and show people that there’s something for everyone.”

While others of a similar age to him may have been devouring copies of The Beano in their youth, Charlie was developing a fascination for superheroes from across the Atlantic.

“When I was really young, my dad had a newsagent in Wellington. I remember there being a spinner rack which had American comic books. That was what I was brought up on, so, since 1972, I was able to access this stuff, from issue one, to two, to three, to four, to five.”

Just over 30 years later, Charlie started work on The Walking Dead comic book series, unaware that it would still be paying the bills more than a decade later.

“When Robert [Kirkman] asked me to do it, I was thinking, ‘Great, this could be my opportunity to do long-form storytelling’. I didn’t know at the time that it would last this long, but here we are, 16 years later, still running with this zombie soap opera!”

The Walking Dead was adapted for TV in 2010, though it would appear that many of the show’s viewers are ignorant of the original comic books, a fact that Charlie takes in his stride.

“I’d say one in 10 people would have heard of the comic. Most people go, ‘It’s a TV show,’ and I inform them that it’s a comic and we’re the co-creators, blah-de-blah-blah, and they go, ‘Oh my god, really?’ But that’s the way Hollywood eats up these things, and fair enough, it’s not up to them to promote the original source material. It’s there in the   credits.”

With issue 191 of The Walking Dead due to be published on the weekend of Comics Salopia, after several years of pencilling the comic book, Charlie is looking forward to taking on inking duties from issue 193.

“I’ve never really enjoyed just pencilling, to be honest. I’m my own best inker, if you see what I mean, so I’ve just gone back to inking. I wanted to give the guy who was inking The Walking Dead good notice, so we gave him a year, saying, ‘I want to get back into doing both’ because I was getting frustrated and I didn’t enjoy the process.

“He did a great job. He was the second-best inker on my work, after me, and he genuinely did a good job, but I wanted to get back and take full control.”

Apart from his work on The Walking Dead, Charlie has also developed a passion for comic books from across the Channel. His second French comic book, Vampire State Building, was published in early April.

“I was a big fan of Asterix, which, when I was six or seven, I didn’t realise was French. French comic books are probably my favourite part of the whole world of comics. I love the way they’re produced, and I love the way the French call comic books the ninth art, so they respect it enough that they lump it in with painting, sculpture and the other arts.

“If, one day, The Walking Dead does finish, I’ll be perfectly happy doing French comic books for the rest of my career.”