Dreaming of a G4 Christmas... 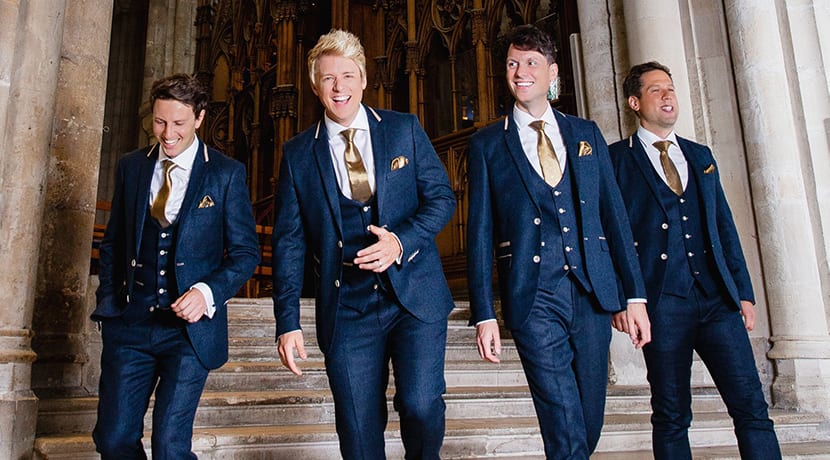 Vocal troupe G4’s classical-style delivery of pop songs has seen them enjoying plenty of chart-topping success, with two of their albums going platinum.

There have been a few line-up changes to the group since they finished runners-up on the first-ever series of The X-Factor. Original members Jonathan Ansell (tenor) and Mike Christie (baritone) are nowadays joined by relative newcomers Lewis Raines (second tenor) and Duncan Sandilands (bass).

What’s the key to G4’s continuing success?
Lewis: We always do our medleys and arrangements ourselves - for both Christmas tours and our other tours. We’re never short of ideas, and we’re always willing to give something a go before deciding whether it’s genius or the worst idea in the world. G4 are ‘yes’ men! It’s also rare to have such a range of voices in one group, so we’re able to go to places other acts can’t. Particularly with Jon’s voice going so high - the sky really is the limit. While a lot of groups have to stick to one key, we can change it up and keep pushing ourselves.

Jonathan: Our shows are very much our own takes, interpretations and creations on stage, which is what gets us so excited about singing. We sing our interpretations of what the best parts of popular songs are, which gives us such a unique personal connection to everything we do. I think that’s why we’re still going 15 years on. If people have got through the Christmas markets to our show without getting delayed eating all the hotdogs, then we owe it to them to give an honest and emotive performance of our work!

Mike: Even if a whacky idea doesn’t work out, it always inspires something else totally unique. We don’t like playing it safe, and when we’ve worked with people who want to kind of create us in this image of the typical classical crossover group, it just hasn’t worked. When we launched, we were something totally new to the industry, and it's important that we stay true to ourselves.

What are the highlights of the Christmas tour for you as performers?
Mike: We get to perform in such amazing venues, particularly a lot of cathedrals and grand buildings, like Birmingham Town Hall. That really sets the tone, and the tour takes on this really magical feeling. Last year’s Christmas tour saw us perform at Blackpool Tower Ballroom for the first time, so that was a particular highlight for us. It’s such an iconic building and so beautiful. We were there just a week after Strictly Come Dancing were, so we fed off the buzz from that, too.

Lewis: As a local, I’ve been to Blackpool many, many times, but the ballroom was just incredible to perform at, and we’re excited to return this year too. What I love most about touring at this time of year, though, is that there are always amazing Christmas markets right on our doorstep.

Duncan: I’m a big kid and always will be. I absolutely love Christmas, and being able to work over this period and sing in some beautiful venues is a real treat. Talking of Blackpool, it’s the Pleasure Beach I’m looking forward to - great way to warm up the voice!

What’s different about G4 Christmas?
Jonathan: We do some of the same songs each year because there’s such a need for  nostalgia around the festive period. We have some great singalong moments. We’ve created our own version of Mariah Carey’s All I Want For Christmas. It’s amazing to get that opportunity to play with an entirely different arrangement of something the audience knows. It’s nice to see the audience like our version of such a popular festive track. We don’t like to sing songs the exact same way the audience expects. We love medleys, particularly at Christmas time because there are so many to get in there.

Mike: We also have some really wonderful children’s choirs at every date. They’re the next generation of singers, and seeing their enthusiasm, funny Christmas hats and smiling faces is just lovely for us. Each choir will choose a soloist to sing the first verse of Once In Royal David’s City, which they will perform a capella in front of the audience. That’s a particularly special moment because you can see the confidence and joy that that opportunity brings them.

What was the inspirational music moment for each of you when you were youngsters?
Jonathan: For me, there wasn’t really a moment - apparently I was just always loud! One day my shouting just turned into singing, I suppose! I confused everyone at school because I was a prop in the rugby team but also sung ‘like a girl’ in the choir with my unbroken voice.

Mike: I was a chorister from the age of eight to 13, and that really set me up for a music career. I had some really amazing opportunities to be in films and feature on soundtracks, so I’m actually in the choirs of Four Weddings And A Funeral. Rowan Atkinson was so supportive. And the actress Sarah Crowe we instantly recognised because she was in a certain cream cheese advert with a high, squeaky voice in the clouds. If you’re a certain age, you’ll know what I’m talking about! It really was an amazing experience that inspired me to keep singing for life. I think it can be really difficult for boys because singing just isn’t seen as cool. Bands and pop acts are different because obviously men like Ed Sheeran and Lewis Capaldi are huge icons, but classical singing, and choirs in particular, are seen only as a thing for girls.

Lewis: I didn’t start singing until I was about 16. I was doing GCSE music because I thought it was one of those subjects where I could just mess around. It got to the summer and I realised I had an exam coming up, but I didn’t actually play an instrument, so I ended up singing. I had a lovely school experience, but there’s still that stigma around boys singing. If you’re not in the sports teams with the lads being a manly man, then you’re admitting that you’re different. That’s really hard, particularly for youngsters.

Duncan: I was lucky at my school in that we were encouraged to do sport and music. You’d see our headmaster both on the sidelines at the rugby match and in the cathedral, cheering on the chamber choir. I should really pay tribute to my mother, who introduced me to such an eclectic mix of singers - from Gilbert & Sullivan to Bessie Smith. I was unfortunate in my cathedral-choir aspirations, though,  because I auditioned a little late and my voice had started to break quite early. That almost killed my singing career and I remember taking a few years out, but it was thanks to school again that I got back into it.

Do you have a favourite G4 moment?
Mike: I think for me it was when our first album went to number one. We literally just went on The X-Factor for a laugh and didn’t really expect to get anywhere. Jennifer Lopez had released an album that same day and we outsold her - it was incredible! We also did the Late Late Show in Ireland, and it was so weird to be recognised by famous people. It didn’t help that Andrea from The Corrs was there, so I was a bit of a mess - and Caprice was one of the guests too! We had to fly back to London for an early-morning interview, and she came into our dressing room and invited us on a night out after the show. We were gutted to have to turn her down. It’s moments like that where we realised how insane the entire experience was going to be.

Lewis: For me, it was when the Red Arrows welcomed us to Jersey when we went to perform there. Obviously we also remember the shows, but it’s always those little moments that stand out. For example, Jon has really got me into fishing. All our tours are full of amazing memories, both on and off the stage, that we could sit and talk about for hours.

Duncan: The first time we rehearsed together after I joined was a really exciting moment for me. There’d been all this talk about G4’s fresh look, but we hadn’t sung together yet. When we actually did, it was just the most lovely blend, and you don’t always get that straight away with groups - they can take a long time to find their stride. Singing together for that first time in full voice and realising we worked together was amazing - and also a massive relief!

You also have some very dedicated fans...
Lewis: We’re so lucky to have fans who just connect with us and keep coming back to see us perform again and again.

Jonathan: We literally do have women who throw their bras onto the stage. There were these two ‘bra ladies’ in particular - and some bras they were, too... more like UFOs! I was  always concerned for the safety of people in their vicinity because they’d lift the bras up and start swinging them around - everybody near them had to duck!

Mike: We’re using their words, to be fair. They were very open about their hammock-sized bras. We’ve had knickers thrown at us too, and flowers. All sorts. I think what’s so humbling is having so many people supporting us. Our shows are great because we get a good mix of superfans and people who’ve never seen us live before but remember us from The X-Factor or something similar. We also get a lot of husbands being dragged along by their wives to see us, and then they end up becoming bigger fans than their wives! They come along determined not to enjoy it, but in the end they have a great time. It’s really touching. We get so many gifts too, particularly around Christmas, which is very generous of everyone.