The RSC’s upcoming programme invites audiences into its main theatre for the first time since March.

Going back to the roots of theatre - a great story - the RSC’s Tales For Winter promises a mixture of live streams and socially distanced events, epic tales of the classical era and magical musical offerings. We caught up with the Company’s artistic director, Gregory Doran, to find out more about the theatre’s long-awaited ‘return to business’...

“We’ve been waiting so long for theatres to start presenting stuff again,” says RSC Artistic Director Gregory Doran. “It was great in the summer when we were able to put on Shakespeare’s Snapshots in the gardens, and we had such a fantastic response to that. Because we’d been doing so much online in 2020, we wanted to make sure that, at the end of this year, we had something in the theatre. We had a programme ready to go, and then the new lockdown was imposed, so we had to change our thinking a little bit. We had to adapt very, very quickly to the new lockdown.

The Tales For Winter programme takes its name from the play we were meant to be opening our season with: Shakespeare’s The Winter’s Tale. But its premise is to go right back to the very start of our theatre making, which is performers standing up in front of a group of people and telling them a story. If you can grab an audience with a single voice telling a story, then you can do anything.”

The programme kicks off with the return of The Boy In The Dress…
“David Walliams was supposed to be live in the Royal Shakespeare Theatre for the launch of The Boy In The Dress cast recording, but now that will be online,” Gregory explains. “David will be reading a bit of the book, and we will launch the soundtrack with special guests including Guy Chambers, who wrote the music with Robbie Williams, and cast members. This has been long-awaited, and since the musical was supposed to be in the West End at the moment, it was even more important that we made this happen.

There’s a bitter-sweet element to it as well. We’re opening the Tales For Winter programme with a signal of where we left off when we went into our first lockdown. If you go into the Royal Shakespeare Theatre now, the wings and changing rooms are filled with the costumes, set, and chairs with the cast names from The Boy In The Dress - ready to go for its run at the Savoy Theatre, London. We’re remembering what a great show it is, and what fantastic musical numbers feature. It’s a sad sense of both remembering where we were when we had to close, and pushing forward to where we hope to be in the near future.”

Gregory is directing a proportion of the programme himself: Troy Story is a five-installment live stream retelling the fall of Troy and all that came both before and after.

“Following on from that premise of storytelling inspiring the programme, we’re going back to the very beginning of stories in Europe and basing Troy Story on Greek classics The Iliad and The Odyssey, and Latin epic The Aeneid. We’re going to stream it over the whole day, and the entire RSC acting company are going to be in that. We’re taking all different parts of the story, from the wooden horse and the end of the Trojan War, to the rage of Achilles, the murder of Hector, and the people’s journeys afterwards - whether that be Aeneas fleeing to Italy, or Odysseus trying to get home to Ithica. It’s an incredible, epic tale over a five-hour stream. Also, I haven’t yet directed this particular RSC acting company. They’re such a talented bunch, who’ve been with us through thick and thin the last few months. It’s fantastic to be able to be with them for their first outing on the Royal Shakespeare Theatre stage - albeit socially distanced - to tell a story that’s been part of our cultural heritage for two-and-a-half millennium.”

The winter programme also includes a Christmas treat: Festive Tales will be presented to a live, reduced-capacity audience.

“Normally at this time of year, we would do a carol concert for ourselves, but that can’t happen in 2020, so we thought we would move it onto the stage and share our yearly tradition with the wider RSC community, who we’ve engaged with so much since March. There will also be a carousel outside the theatre, and some fire bowls, so that there can be some more adhoc storytelling alongside the carols. The Royal Shakespeare Theatre seats around 1,000, but we’ll have to cut that down to 200 for appropriate social distancing. But getting audiences back in the theatre is going to be an incredibly moving moment for everyone - the performers, the audience, and us as a whole company.”

Looking forward to early 2021, the RSC will present a week of live streamed performances inspired by bestselling author Michael Morpurgo’s new book, Tales From Shakespeare. Offerings include Macbeth, A Midsummer Night’s Dream and Romeo And Juliet. 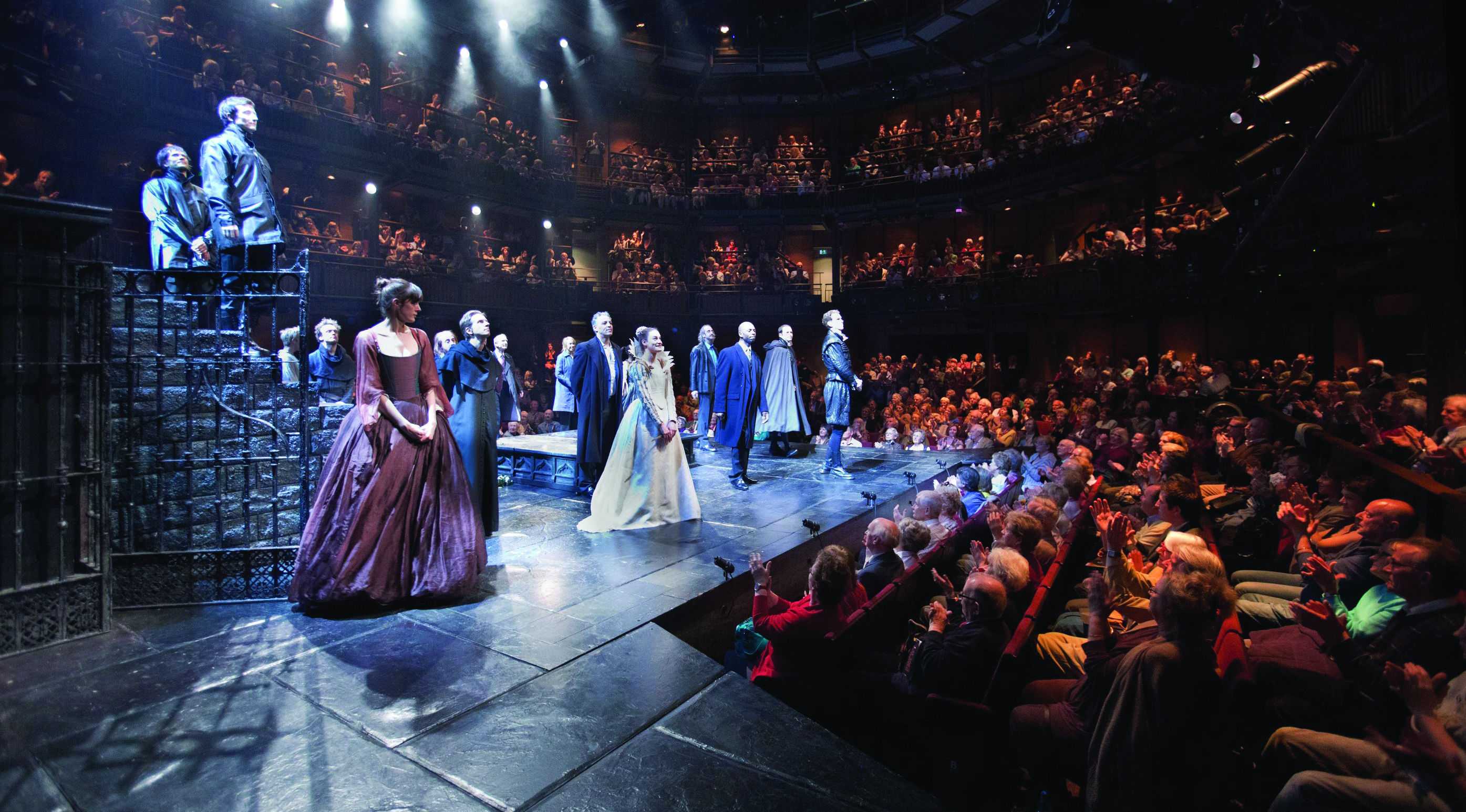 “It’s fantastic that Michael Morpurgo himself will be part of the festival. I had a conversation with Michael about three years ago, about whether he’d consider rewriting Tales From Shakespeare, so I’m really thrilled that he’s done it and that we have the honour of premiering them. Michael was the Children’s Laureate and obviously much-loved by schools and families. He doesn’t actually publish them until next year, but still he’ll be reading some of them. He’s written 10, and we’re presenting six of them at the moment - and hopefully the other four will follow shortly, too. Instead of performing them to a house of schools and family audiences, we’ll be doing them online with our RSC acting company. The company will be reading them knowing that the intended audience is primary school children. They are incredible tales in the way that he’s rewritten the plays in a very vivid and contemporary way. We’re so excited to be able to use these tales to help inspire a younger generation with Shakespeare.”

The RSC’s unavoidable focus on online content this year has revolutionised their work for the foreseeable future.

“So much has been going on over lockdown and beyond with our associate schools programme, with our regional theatre partners - lovely initiatives like Share Your Shakespeare. They will continue. We’ve been at the forefront of online work with schools over lockdown, helping drama teachers who’ve never had to conduct drama lessons on Zoom. We’ve been getting some of our freelancers and education practitioners to put their creative minds to that, and help in any way possible. The work we do outside of the performances has had time to grow and develop over this period, and it’s been very necessary to do so for the community. I’m sure that will continue to develop.

“We’ve found a whole different life online, and different ways of keeping engagement with our international friends and stakeholders who won’t be travelling any time soon. Our Talking Shakespeare programme in the summer had Judi Dench, David Tennant, Harriet Walter and Juliet Stevenson. The new series at the moment  started with Ian McKellen, Helen Mirren and Roger Allam, and will soon be followed by David Oyelowo and Jane Lapotaire - so many great RSC actors entertaining us with stories of their careers and love of Shakespeare. We’re also leading a fantastic initiative called Audiences Of The Future, and that’s looking at really interesting ways of putting content online.”

There will also be other changes going forward: “There’s certainly been a lot of recalibration and rethinking going on here at the RSC; thinking about how we create and how we deliver. Our process of dealing with closure and opening again hasn’t just been about restoration, but there’s also an element of opportunity. We’re reassessing who we are and what it is that we do. While this has obviously been a huge crisis, I think it has also posed great opportunities for us. Clearly, in the short term, closing the Swan Theatre and the Studio Theatre at The Other Place is devastating for us, but it’s in order for us to come back stronger at a later date. I think with The Other Place, in particular, it’s less about the bricks and mortar and more the spirit of the place that makes it so unique. We should have been in Tokyo with Taming Of The Shrew before the Olympics this year, and when talking to the British Council over there, they reminded us that the Olympic Torch is still alight. That became a really powerful symbol for us, about how we need to keep our flame burning on - and the way to do that is to keep finding new writing, new platforms for underrepresented voices, and new digital solutions. We want to continue that radical spirit of The Other Place - invention, innovation, all things new. The same with the Swan Theatre - we want to make sure that we’ve had writers working on projects all this time.”

Despite the challenges 2020 has posed, Gregory is confident about the RSC’s future: “Post-Christmas we’ve got an amazing piece of work coming up that’s a fusion of jazz and Shakespeare with Black performers. We’re very excited about that, but we haven’t announced it just yet. We wanted that to come before Christmas, but unfortunately we had to shift it back a little. Having audiences back is the most important thing and is what we’re looking forward to most in the future. Our audiences are who we are. We are there to perform to people - Shakespeare primarily, and also other things - but without people to watch, we are nothing. We so wanted to be opening this winter with The Winter’s Tale and Comedy Of Errors productions, which we had to postpone back in the spring when lockdown was announced, but we knew we simply couldn’t do that just yet with the social distancing. We will, hopefully, be able to stage those in summer 2021, and then they’ll be followed by fantastic family show The Magician’s Elephant for the autumn and on through Christmas.

“This period has made us realise how much we need the arts; how much we need theatre. It brings that sense of community, communion and congregation that we didn’t really understand the value of until it was taken away. We’ve never faced a crisis like this in the history of the RSC. In 140 years we’ve never missed a summer season - even when the theatre burnt down in 1926 - apart from maybe during the First World War. This is the first time in a very long time that we haven’t been performing Shakespeare plays in the theatre in the summer, so we can’t wait for that to happen again. There’s a wonderful moment at the end of The Winter’s Tale where a statue comes to life, and that image is going to be a really powerful one for us in 2021.”

For all forthcoming productions - streamed and live, visit: rsc.org.uk