John Boyne talks about The Boy In The Striped Pyjamas 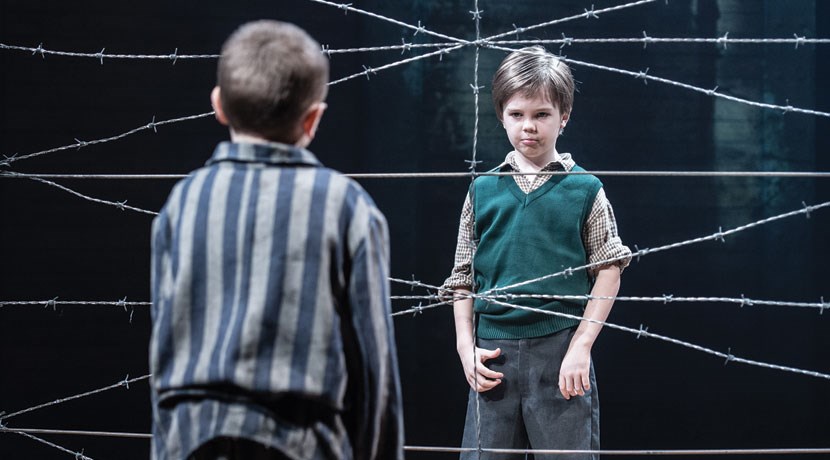 When Irish novelist John Boyne came up with the concept for a children’s novel based on the atrocities of the Holocaust, little could he have imagined the world-wide appeal of his work. A stage version of John’s story is currently being toured by the The Children’s Consortium, stopping off in Coventry this month.

The Boy In The Striped Pyjamas was your first book for children. Where did the story come from?
I’d been quite a serious student of Holocaust-related literature for many years. It had been a subject that I’d been very fascinated by and had read very widely on, but I never thought I would write about it myself. This idea came into my head of these two boys at the fence, talking to each other. The whole story sprang from there. All of that reading and research over the years just led me to a place where I could explore the subject in what I thought was an original way.

Marketed as a book for young readers, the nature and style of the narrative also lends itself to adult reading. Were you conscious of this when you started writing, or is it something that became apparent once the book neared completion?
I wasn’t too conscious of it when I started. I was a few chapters in when I thought that because my protagonist was nine years old, this was maybe a book for young people - but it didn’t seem that important to me in terms of who its audience were. However, when I presented it to my agent for the first time, I did say it was a book for young people. I didn’t think it was going to have an appeal outside of that, but it quickly became this crossover novel, which slightly surprised me.

Did the depth of your knowledge suffice, or did you have to dig deeper in terms of research to get everything you needed to make the narrative more convincing?
I felt I had enough for the first draft and to just let the story spring from that. Once I had that first draft completed, I knew all of the things that I didn’t know, and that I therefore had to find out more about. I had to decide how faithful to the geography of the camps I wanted to be. I wanted to keep it as a fable, as a work of fiction, but I went back to various sources immediately after that first draft, including the memoir that Rudolf Hoess wrote after he was captured and imprisoned before he was hanged.

What was your initial reaction on hearing that Mike Harman wanted to turn the story into a film?
I met with Mark and we talked through it. He seemed to have a good idea for how he wanted to do it and I was happy to let him go ahead. To be honest, I’ve had several of those meetings over the years. At the end of the meeting, you think ‘That was a nice conversation, but I’m sure it probably won’t go anywhere’. On that particular occasion, though, it did go somewhere. I became quite involved with the project and was very pleased with everything that Mark did.

Could you ever have anticipated the enormity of its success?
No. I thought it was going to be more successful than my previous novels - but that wouldn’t have been to hard, to be honest. There was a good buzz about the book in the publishing industry leading up to its publication. It had sold into a lot of countries for foreign rights and it felt like everything was in place for it to reach an audience. People were reading it in that early stage and were surprised by the ending. I felt confident that it would be successful but I didn’t think it would do as well as it did.

The Boy In The Striped Pyjamas has been published in forty-seven languages. When writing, do you find it necessary to consider a book’s universal appeal?
Not really. Since then, pretty much every novel I’ve written has gone into about thirty languages, so I just write the best book I can write. I think if you write something good it will reach an audience - or at least publishers in different countries will feel it’s strong enough to publish. I don’t really think in those commercial terms, I just try and write a better book every time.

What’s been your involvement in Angus Jackson’s stage adaptation?
A little bit less. I’ve had so much involvement with Boy In The Striped Pyjamas projects over the years that I kind of stepped away from this one a little. I read the draft that Angus wrote and we met to discuss it. What I like is the fact that he’s adapted the novel rather than the movie. It’s a completely fresh take on it. In some ways it makes more sense as a play because there are very few characters in the novel and very few locations. I think the intimacy of the relationship with the audience, and between those two little boys, works quite well.

What’s the main consideration when writing for children as opposed to adults?
I’ve written four books for young people and I don’t try to change the language. I don’t try to simplify it. The themes that I write about are as serious as the things I write about in adult novels. For me, it’s about taking a young person, putting them in the centre of an adult experience and seeing how they manage to cope. I think that’s what’s more interesting for young people. I’ve been in lots of schools over the years, and they don’t want to be talked down to. They don’t want stupid stories. They’re willing to be challenged with the serious subjects that my books cover - the Holocaust, the First World War, the death of a parent - and talk about them and learn about them. It comes down to, if you write a good book - no matter if it’s for adults or for children - you just need to write something from the heart and hope it finds that readership.

Does your creative process always follow the same route?
It does really. I move back and forth between adult and children’s books. Somehow that’s good for me and it creates something. I write the first draft in a relatively short space of time, maybe over six months. I just plough ahead and don’t go backwards at all. I just keep going until the end. I don’t plot out the books. I just start with a basic idea and let it build from there. It’s pretty much the same process every time.

Being an author is a solitary profession. Do you have someone who you usually bounce ideas off?
A lot of my closest friends are writers, and the writing community here in Dublin is quite a tight one. I certainly have friends of my own generation, and we talk about books and publishing and share drafts with each other. I like the solitary nature of writing. I’m quite a solitary person and I quite like the peace and quiet of being alone at home and working.

Do you write every day?
I certainly try to. I’m a morning person, so try to write between eight and noon as much as possible. That’s when I’m at my best. I never write in the evening.

It’s documented that from as young an age as twelve you wanted to become a writer. How did you turn that aspiration into reality?
Right through my teenage years I was writing all the time. I was writing so many short stories. It wasn’t one of those things where I was just saying, ‘This is what I want to do’. I was actively doing it. Then, when I was older and I left university, I opted for a Masters in Creative Writing at the University of East Anglia. Michael Bradbury was still teaching there at the time, and it was a great course to get on to. It really fed my ambitions. From there it was just a case of keeping going, trying to write a novel, trying to get an agent, trying to get a publisher. I had it in my head that I wanted to be published by the time I was thirty. My first book came out when I was twenty-nine. I had just four months to spare before I hit that mark.

Your latest children’s novel, The Boy At The Top Of The Mountain, is due for release later this year. Set during the reign of the Nazis, it tells the story of nine-year-old boys. Is that, together with maybe the title, where its similarities end in terms of The Boy In The Striped Pyjamas?
Probably. I do seem to be fascinated by war. My last children’s book, Stay Where You Are And Then Leave, was set during the First World War. The Boy At The Top Of The Mountain is very much about brainwashing. It’s about a child who starts out as a good kid but shows how easy it is to become corrupted. I think it’s the setting that I’m going to go back to time and time again. There are so many stories that can be told there. In a wartime setting you find so many aspects of human nature that you can do a lot with as a writer.

Thinking back to when you were nine, what would have been your favourite book?
Treasure Island, which is the book that Bruno carries with him all the time in The Boy In The Striped Pyjamas.

Did you base Bruno on anyone in particular?
No. I knew that the Commandant from Auschwitz, for example, had brought his family to live there and that he had five children but I didn’t base Bruno on any of them. The same with Shmuel - he’s just a representation of children. Neither of them are based on real-life people.

Your first collection of short stories, Beneath The Earth, will be published in the autumn. Tell us more...
I’ve published quite a lot of short stories over the years and last year won the Irish Book Award for the Short Story Of The Year. I thought it was time to put a collection together, so I’ve been working on quite a few different stories recently. They’re all relatively new. Some have been published in magazines or anthologies, others are brand new. I’m a bit nervous about it because I’ve never published a story collection before. They have to have some unifying field to them, and I’m trying to figure out the structure in terms of the running order of the stories. I’m certainly looking forward to them being published.

The Boy In The Striped Pyjamas shows at Wolverhampton Grand Theatre from 9 - 13 June and Belgrade Theatre, Coventry, from 16 - 20 June