Little Miss Sunshine on a road trip to Brum 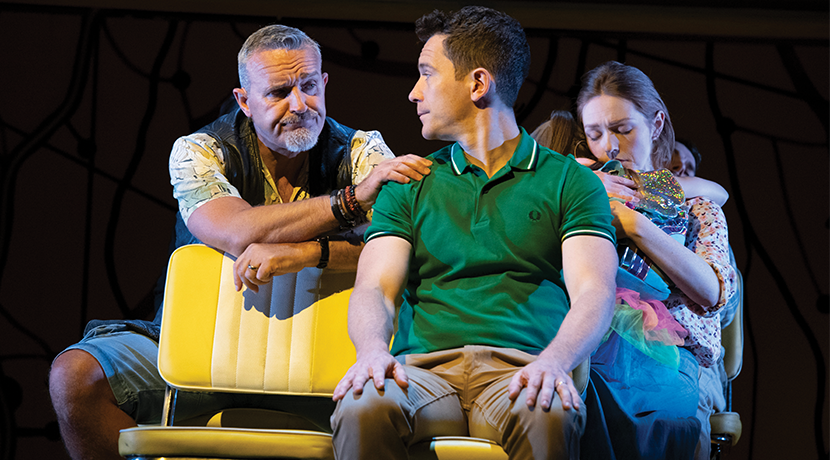 The Voice's Lucy O'Byrne is in Birmingham this month with new musical comedy Little Miss Sunshine. What's On spoke to her about the show and her own rise to musical theatre stardom...

Little Miss Sunshine follows 10-year-old Olive and the rest of the Hoover family on an epic cross-country trek. Their goal is to make young Olive a beauty pageant queen. But not everything goes quite according to plan...

Based on the Oscar-winning film of the same name and written by the Tony Award-winning team of James Lapine and William Finn, Little Miss Sunshine promises to provide a family night out to remember.

“The Hoovers are the ultimate dysfunctional family,’ explains Lucy, who stars in the show. ‘Plus, 10-year-old Olive is not what you might think of from the pageant kids who you see on TV programmes. But it’s still something she’s always wanted to do, so her family takes her on the 800-mile round-trip from New  Mexico to California. Little Miss Sunshine follows how this dysfunctional family really comes together when overcoming all the bumps in the road. It’s definitely a family story and is also very, very funny. It’s quite dark comedy but really heartwarming all the same. It’s also very relatable! Even though it’s set in America and their dysfunctionality is heightened and exaggerated, everyone I’ve spoken to who’s seen the show can see their own family reflected on stage at one point or another.”

Classically trained Lucy has previously starred in iconic musicals such as Evita, Les Misérables and The Sound Of Music. Little Miss Sunshine is completely out of her comfort zone - but that’s one of the many things she loves about playing the character of Sheryl Hoover.

“Little Miss Sunshine is so different to my   previous roles. It’s completely out on its own in respect to anything I’ve done before. I find every day a challenge with the show, and I love to be challenged. I’m also in the company of some amazingly strong actors. With the musicals I’ve done previously, the story has been communicated much more exclusively through the songs. Obviously, Little Miss Sunshine is still a musical and the songs do also tell the story, but it contains a lot more dialogue than I’m used to. The music and the songs really move the story along, which is really special, I think. My previous roles have been well-known characters singing their stand-alone iconic songs one after another. In Little Miss Sunshine, it really feels like the songs very much contain the characters and the story within themselves.”

“I think our show definitely pokes fun at the beauty pageant world,” says Lucy. “It’s not really a massive commentary on beauty pageants, but we definitely do point out how silly it is having all those tiny children caked in makeup. For the Hoover family, ‘worth’ is definitely more focused on who you are as a person, and I think that really comes across in the show. The audience really root for Olive like nothing I’ve ever seen. Near the end of the show, the Little Miss Sunshine audience almost becomes the audience of the pageant itself, and they really cheer her on because she’s such a great little character. So I guess the message from us is that you don’t need all the hair and makeup and flashy outfits - it’s all about who you are on the inside.”

Coming from a family of theatrical performers, Lucy always dreamed of becoming a musical theatre star: “I grew up doing theatre, and both my parents and my sister are also doing theatre, so I would follow them around while they did their shows. Theatre was always a big part of my life, and I always dreamed of going to London to star in the West End. I studied in Ireland and came over to London, got myself an agent and was trying to audition for things while working as an usher. It just wasn’t working out for me until I did The Voice, and low and behold, here I am!”

Lucy was a runner-up on series four of The Voice, which gave her more exposure than she ever dreamed it would. She looks back fondly on her time on the show: “The Voice changed my life, and I have nothing but happy memories of it. I didn’t go into it expecting to come out with a record deal, a job, or a best friend in Will.I.Am. The only hope that I had was to get a little bit of exposure; maybe I’d get a            show-reel out on TV that would get me an audition for something. It was an amazing platform for me and gave me the most incredible chance to pursue my dream career.

“I almost immediately went into auditions for The Sound Of Music after The Voice, and that was because I’d been seen on there. But it’s hard work. The Voice was almost a year of my life. I definitely developed as a performer and a person. I’ll always be grateful to the show, but everyone who takes part has a different experience. Some people go on these reality TV programmes and find themselves chewed up and spat out, whereas I had the time of my life. I can only say that I had the best possible experience!”

Lucy hopes to continue with her career in musical theatre for the foreseeable future. For now, though, she’s thoroughly enjoying   having Little Miss Sunshine as her sole focus…

“I just think the show is the most uplifting two hours you can spend in the theatre because the Hoover family are just like everyone’s family. Yes, what happens to these poor people on their journey is sometimes farcical, but everything that you see in the show is just reminding everybody of how lucky we are to have our friends and family. For me, it’s such great fun every night to perform. Everyone I’ve spoken to says how much fun they’ve had watching it too. You’ll certainly come out with a smile on your face! While I was rehearsing, it was on at the Arcola in London, and after my second day of              rehearsal I went to see it. I can honestly say I laughed and cried for the whole two hours! The journey the Hoover family take you on is amazing, and I can honestly recommend this beautiful show to anyone.”