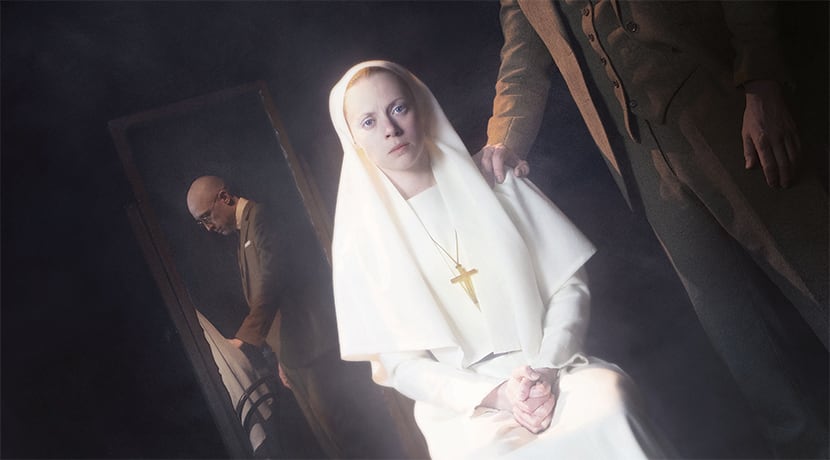 A new production of Shakespeare’s dark comedy, Measure For Measure, is showing at the Royal Shakespeare Theatre in Stratford this summer. Leading lady and Midlander Lucy Phelps talks about the play, her character of Isabella and her love for the RSC…

“Measure For Measure is set in Vienna,” explains actress Lucy Phelps, who stars as Isabella in the new Royal Shakespeare Company (RSC) production of the play.

“Vienna has become a city that is very corrupt and boiling with sexual promiscuity.

“The Duke takes a step back from his responsibilities, as he’s not quite sure how to resolve Vienna’s issues, and lets his deputy, Angelo, take charge. But instead of going on a nice retreat, the Duke goes into hiding and observes what happens in the city… kind of like in an episode of Undercover Boss!

“A lot of the play questions how power changes people. The play becomes a study of power and concepts of justice and mercy. Whose power and laws should you follow: man’s, God’s, or your own humanist morals? How can we get the right balance of justice and mercy? Angelo decides to take a very hard line with Vienna’s problems and starts rigorously enforcing laws that hadn’t been enforced for years.

“A young man called Claudio is made an example of and gets sentenced to death for getting his fiancée pregnant before they’re married. Isabella, Claudio’s sister, is about to take her vows to become a novice in a convent and gets pulled away to plea for her brother’s life. Angelo takes a fancy to her and tells Isabella that he will release her brother in exchange for her virginity. She then faces a choice between her religious beliefs and her love for her brother…”

Lucy thinks this is a play that will very much resonate with modern audiences: “Abuse of power has been a big discussion in the world recently. Also, the offer that Angelo makes to Isabella is a form of sexual assault, so this play highlights the position that many women even now can be put in by men in positions of power. However, quite interestingly in this play, we also have two female characters in positions of power, one of whom shows her complicity in the exploitation of Isabella and patriarchal abuse of power. So there are definitely some hot topics in this play, and I hope audiences leave the theatre at the end with many discussions to be had but also many questions. After all, Measure For Measure is one of Shakespeare’s ‘problem plays’, so it’s left quite open-ended, and critics and audiences alike debate a lot of the choices that characters make. I won’t reveal what our production has decided to do about that, but I do hope that it encourages people to examine the relevance of these themes and topics to society now. It’s so exciting to be in a play that will ruffle a few feathers!”

The character of Isabella is surrounded by controversy in the world of Shakespeare, as Lucy explains: “I’ve always loved Isabella because Measure For Measure is a play I studied at school. I’ve always loved the play, so I was thrilled to be given an audition and even more blown away to be offered the part. Isabella is a very complex character who causes a lot of controversy amongst Shakespeare critics in terms of her actions and choices, but I feel like I understand and sympathise with her motivations as a character, and I wanted to give her a go. I grew up in an Irish-Catholic family, so was very acquainted with nuns and really felt that I understood Isabella, so it’s a dream to take on the role.”

The coming months see the RSC staging three Shakespeare plays: Measure For Measure, As You Like It and The Taming Of The Shrew. These will then go on tour in repertoire across the country.

“I’m really excited for us to tour. I love visiting parts of the country I haven’t been to before, as well as seeing the theatres and getting to know different audiences. It’s really good experience for an actor because it’s always interesting to see how different audiences react to the story you’re telling. Last time I went on tour, we all got our National Trust memberships and went and visited some really nice areas. I’m really excited to be taking our three Shakespeare stories out on the road this year.”

Lucy is pleased that the RSC is setting an example for other large theatre companies by  making its productions accessible: “I know the RSC isn’t based in London, so we’re a bit of an anomaly to start with, but theatre should be for everyone in all parts of the country, regardless of their access to places such as London or Stratford. If companies have the resources, they should definitely be making their shows as widely available as possible.”

Being a Midlander herself, the RSC holds a special place in Lucy’s heart: “I grew up near the RSC, so it was always the place that I aspired to be. I would also go to The REP and the Hippodrome in Birmingham, but the RSC was the closest theatre to me that had so much international acclaim. I had it on such a high pedestal growing up because I also had a big love of Shakespeare. I think of the RSC as acting boot camp! If you can command Shakespeare texts, you can handle any modern play. I don’t mean that in the sense that modern plays are inferior to Shakespeare’s, but the amount of effort that a Shakespeare play requires - to unpick it all and understand the character’s words, thoughts, the punctuation they use and the wide-ranging genres Shakespeare uses - is huge. I can take that skill of closely analysing texts into all my work in the future. A lot of modern writing is also very rhythmic like Shakespeare, so I think working on the classical rhythmic texts really unlocks your best acting.”

So why does Lucy think audiences should check out Measure For Measure this summer?

“The company has been working together all season on other plays, so now we all know each other incredibly well. The depth of the relationships between us means that the rehearsal rooms are always very creative and fruitful. I think we’re really pulling together something that’s exciting and challenging and which resonates with the audience.

“Measure For Measure promises a really thought-provoking night out at the theatre. But it’s also not all doom and gloom. What’s amazing about this play is how Shakespeare couples the dark parts with the light and comedic. There will certainly be a few laughs to be had, too!”

Measure For Measure shows at the Royal Shakespeare Theatre, Stratford-upon-Avon, from Friday 28 June to Thursday 29 August.