Mott The Hoople frontman talks ahead of Birmingham gig 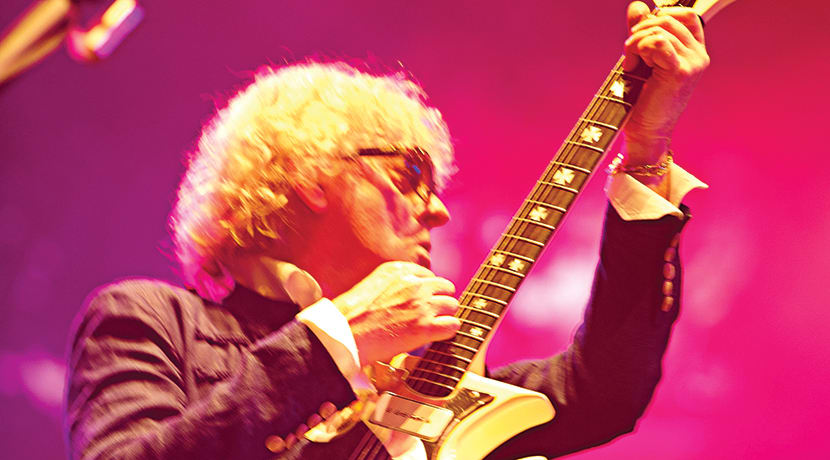 While Shropshire may not be a hotbed of music, it is the birthplace of one of rock’n’roll’s most distinctive performers - Ian Hunter.

Born in Oswestry but now living in Connecticut, Ian is looking forward to returning to the UK this month with Mott The Hoople, the legendary band that left an indelible mark on the rock world between 1969 and 1974.
While the original Mott line-up has reformed twice in the last decade, this tour will see a change in personnel...

“There were two halves to Mott The Hoople,” says Ian. “The first half finished in ’73, and ’74 to ’75 is the second half. This is with Ariel Bender [aka Luther Grosvenor] and Morgan Fisher.”

While Ian isn’t planning to reform Mott on a permanent basis - “We don’t want to run it into the ground” - he sees this tour of the UK and US as a chance to reward the patience of his bandmates from the latter Mott line-up.

“In the first two get-togethers, with the original band, Morgan and Luther weren’t involved. They came to the gigs and were great sports about it, and I thought, ‘If I ever get a shot, we’ll do Morgan and Luther so that they get their shot too. That’s basically why we’re doing it.”

With Fisher now a resident of Tokyo (Bender lives in Worcester), Ian admits it’s been “a bit of a drag when it comes to visas and all that kind of thing,” but he’s nonetheless looking forward to revisiting the final two Mott albums with his old muckers: “The Mott The Hoople Live album came out in 1974. Half of it was done in London, the other half in New York. It’s a good live album. Also, The Hoople album was released, but there’ll be a couple of chestnuts in there from before.”

One such chestnut will almost certainly be All The Young Dudes, the 1972 single that became the band’s first hit, donated by David Bowie on hearing that they were planning to split up.

“Bowie offered us a couple of tunes which were okay, but we were writing okay stuff. All The Young Dudes came along and it was like, ‘Good god, why do you want us to do this? What an incredible song! Why are you giving it away?’ At the time, it saved our lives, but unfortunately it was also the beginning of the end for us. The band got a little disenchanted because now we were a pop band. I wouldn’t say we were glam, because we were too average-looking, but we were flash, and it took off that way.

“We lost either way. If we’d carried on as we were, it wouldn’t have gone on much longer. But we had the hit, then we had a few more hits after that, so we were suddenly a pop band. People were upset either way.”

Following the demise of Mott, Ian’s solo career took off, with Once Bitten, Twice Shy becoming a top-20 hit in the UK and Cleveland Rocks earning him the key to the city of Cleveland in 1979.

Forty years on, it appears that his creative juices are a long way from drying up: “Lyrically, you can only go to the well so many times, but somehow, right now, I’m coming up with stuff, and I’ll keep doing it for as long as it keeps coming.”

In the 1970s, Ian’s ‘lyrical well’ included teenage memories of his childhood in Shropshire, with the song 23a Swan Hill recalling the address in Shrewsbury where he lived in the first half of the 1950s. Irene Wild, meanwhile, referenced the town’s former bus station.

As for the inspiration for Irene Wild, the song’s tale of unrequited love was based on Ian’s experiences with a real person: “Yeah, she was absolutely gorgeous, and I never actually got to go out with her. She was going out with a friend of mine. His family owned a fruit & veg company in Shrewsbury, and I was the go-between. I would send messages from Pete to her and her to Pete, so I would be miserable in vain.”

While that experience ultimately proved frustrating, another connection during Ian’s teenage years had a major influence on his burgeoning musical development.

“There was this kid called Tony Wardle, who worked in an electrical shop and had a harmonica band. That’s how I started, on a harmonica with Tony! Gradually I persuaded him that we could do a couple of guitar numbers during our harmonica show!”

Alongside music, Ian also enjoys football and is probably Shrewsbury Town Football Club’s most prestigious celebrity fan. When asked which of his tunes he’d like to hear belting out before home games at Montgomery Waters Meadow, the 79-year-old had a lighthearted message for the club’s current manager, Sam Ricketts: “I’d change Cleveland Rocks. Maybe we should do a Shrewsbury Rocks? Ask old Ricketts if he wants me to do a Shrewsbury Rocks!”

The band are also performing a pre-tour warm-up show at The Assembly, Leamington Spa, on the 17th of this month, for which they’re making a limited number of tickets available.