Shakespeare at the castle 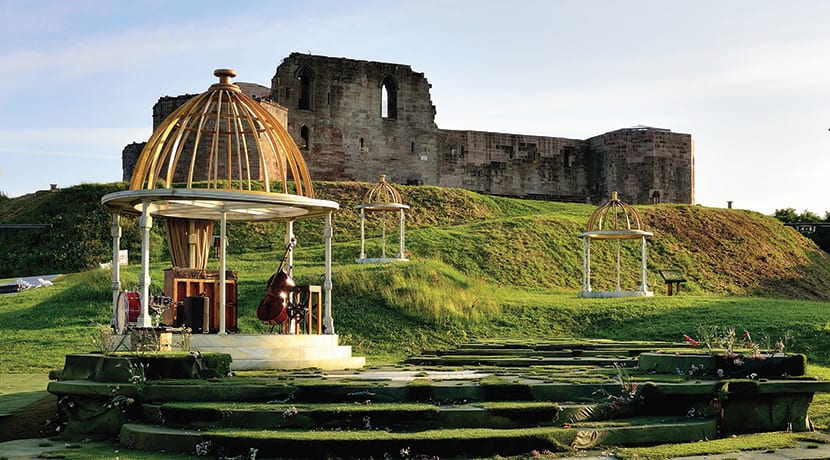 Stafford Festival Shakespeare returns to Stafford Castle at the end of this month with a production of The Merchant Of Venice. What’s On recently caught up with this year’s director, Oliver O’Shea, to talk about the show and his decision to set the action in 1950s New York…

Shakespeare’s The Merchant Of Venice centres on a loan given to Bassanio and Antonio to subsidise the former’s pursuit of wealthy heiress Portia. It’s a tale of money, anti-Semitism and deception.

“Shakespeare’s plays are so rich, and this particular one is complicated and challenging as well as being at times moving and funny. But it feels particularly timely in our country to be doing The Merchant Of Venice because it is, in part, about divisions within a community in terms of wealth and religion. It feels like a play that is really perfect to stage now, as well as being a classic that hasn’t yet been produced at Stafford Festival Shakespeare. In recent years SFS has done, for want of a better phrase, the ‘blockbusters’. I think the producers were looking for something that took a different turn to those of recent years.”

Oliver has set his version of the play in 1950s New York City.

“This is a fresh take on The Merchant Of Venice in lots of ways. We were looking for a 20th century parallel to how Shakespeare’s contemporaries would have perceived Venice in their time. Shakespeare would have known about Venice as this major, global port, and it had a reputation for being somewhat liberal. Venice was also relatively multicultural and had this almost legendary status, even though Britons didn’t necessarily know much about it in reality. In 1950s New York there were lots of different communities and a large number of Jewish people, as well as lots of different ethnicities and immigrants. So it seemed like an interesting parallel. We were interested in that idea of a place helping the audience to understand the Venice that Shakespeare was imagining when he wrote Merchant. So that’s a distinctive element of our production.

“Another way this production is different is because of my work as a dramaturge, which means I help develop new plays with writers and provide support to people creating adaptations of novels. As such, I’ve lightly edited this production to shift the perspective on certain scenes. I think seeing Shakespeare outdoors always changes the play, too. Seeing it performed in natural daylight, like it would have been at The Globe originally, is a very different experience. Unlike many outdoor productions of Shakespeare, we’re bringing all the elements of modern theatrical production into the outdoor space. So rather than being like a museum piece or a replica, this is very much an original. We have a cast of 12  actors with gender parity and a really brilliant creative team. I think this production will be a really thrilling and exciting one that’s full of playful moments. That’s part of my approach as a director: I look for the most dramatic version of the dramatic art, but I also like to highlight the moments of levity and playfulness.”

Oliver is a passionate advocate for diversity in British theatre: “I think Shakespeare is definitely one of our greatest playwrights, but because I’m also interested in new work and plays, I think it’s important that we have a diverse offering on the theatre scene. What I would say is that Shakespeare being staged regionally is quite rare, outside of such places as the Royal Shakespeare Company. There are outdoor stagings of Shakespeare, but on a much smaller scale than Stafford Festival Shakespeare. The problem with classical plays in the staging of regional theatre is the cast sizes, which makes them expensive to put on. Obviously it’s brilliant and important that people are finding the resources to stage Shakespeare. It’s so important that theatre is for everyone and in every part of the country. I’ve chosen to be based outside London, which is relatively unusual for a theatre director, because I believe that everyone should be able to access great theatre performances in their local community. It’s also really important that we do present our         classics, but not just for the sake of it. We need to think about why we want to stage that classic play now: they need to still be relevant and to resonate with audiences."

Oliver believes making plays accessible is essential for directors of Shakespeare: “Schools’ presentation of Shakespeare plays is part of the reason for some people seeing his work as inaccessible and not relatable. If you’re still learning how to read contemporary English, and perhaps you’re struggling because people all learn at different speeds, and then all of a sudden you encounter a text that seems a bit different in language and poetic form, it can put you off for life - especially when it’s taught in such a dry way. I think that’s part of the reason we’ve edited it the way we have and changed its setting. Also, with the way television and film work now, people expect their entertainment to be more streamlined and delivered quickly. There’s also, perhaps, too much reverence surrounding Shakespeare as a figure. Obviously he was an incredible writer, but I think if he could look back on his own plays from now, he would revise and modernise them too. I think actors and directors who stage Shakespeare today have to bring their own modern theatre-making principles to bear on the text.

“On a much simpler level, it’s just about making the play really come alive. If there’s a really obscure cultural reference that really doesn’t exist at all today, then it should just be cut out. That’s the approach we’ve taken - getting rid of the stuff where you really need an in-depth knowledge of the social workings and history of Shakespeare’s period. Some people might see that as disrespectful, but we need to make Shakespeare interesting, exciting and understandable: that’s the most important thing we can do to keep Shakespeare alive in the modern theatre world.”

Oliver loves the variation that comes with directing theatre: “I’m directing A Christmas Carol at Derby Theatre, and it’s a brilliant version because it has an ensemble approach with eight actor-musicians. The version we’re doing intersperses carols throughout the production, which makes it a really lovely family show. The strange thing about being a director is that your head is often in more than two different stories at once, and you have to be able to put a play aside for one day and then come back to it the next. It can be difficult, but I like it because it makes my life so varied.”

Returning to the subject of The Merchant Of Venice, why does Oliver think Midlands theatregoers should make the trip to Stafford Castle to see the show?

“I think if you live in the area and you’ve never been to Stafford Festival Shakespeare at the castle before, you should definitely give it a try. It’s an extremely unique setting, and it’s quite surprising that a fully resourced, big-scale Shakespeare production happens every single year on a hill in Stafford. To those who’ve been before, I’d say that the festival is reinventing itself year upon year. So don’t miss our approach to Merchant, as it gives a different flavour to the very well-received production of Macbeth last year.”

The Stafford Festival Shakespeare production of The Merchant Of Venice runs at Stafford Castle from Thursday 27 June to Saturday 13 July.