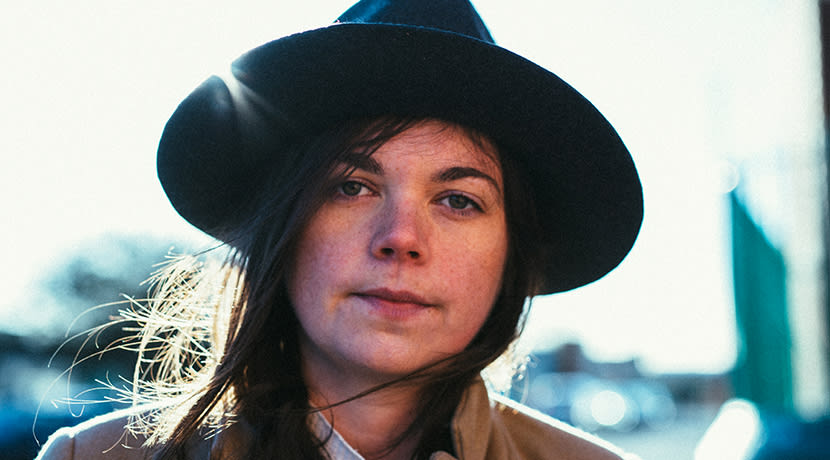 Singer-songwriter Jess Reid appeared on What’s On’s Launchpad stage at this summer’s Shrewsbury Folk Festival. Here, she chats about her inspirations and the Shropshire music scene ahead of supporting Dan Owen on tour...

What’s your first musical memory?
I must have been around four or five. My parents were in a band together and they were playing some gigs in France. I remember picking up a harmonica and getting up on stage with them. I was unable to play, so it was my first experience of miming!

So you come from a musical family, then?
My dad has been a songwriter and performer from a young age. He’s been in a number of bands. My mum is musical too and played bass and backing vocals in bands with my dad. They play gigs around Shropshire now and my dad runs an open mic in town. My sister is a singer, and we’ve always been in bands together. Our first band was called Jia Jinx, and we used to play in Shrewsbury a lot. I’ve been living in London and Birmingham and she’s had a baby, so we play and write together less now. She’s a great singer and songwriter, so she’s always the one I go to first with song ideas!

Who are your inspirations?
Growing up, I was always inspired most deeply by the musicians around me. I’d go to a lot of open-mic nights and jam sessions in pubs and met some amazing musicians. Having people around you who you can see week to week is great, as it makes everything seem more achievable. Being able to hear a new song that someone you know has put together enables you to see a rawness and vulnerability that you can rarely see from a famous artist on a big stage. I play in a percussive guitar style and I first saw a local musician play in this way. That inspired me profoundly. In terms of inspirations now, I love a Swedish artist called Susanne Sundfor - she has the best voice. I would love to be able to sing in any way similar to the way she does. Ben Howard, Lucy Rose, The Staves and Damien Rice are my favourite artists currently.

You’re predominantly a solo performer, but who would be your ideal collaborator?
I’ve been playing with a cellist recently, which has been amazing! Cello is my favourite instrument, so I’d always like to have cello alongside me. I love vocal harmonies, so some backing singers would be great. I’ve been exploring different instruments whilst recording my new EP. The EP features a full drum kit and bass guitar, so it’s given it a more radio-friendly sound - live drums and bass would be nice too. It’s the cello and backing vocals that touch my heart the most though.

What would be your dream performance?
I usually go to Green Man Festival every year. It’s a perfect size of festival and the main stage is at the bottom of a hill, so everyone enjoys the music while lying on the grass. I would love an afternoon slot in the sunshine with a full band and some beers!

What’s your favourite performance to date and why?
I played a Sofar Sounds show in Rio de Janeiro in Brazil in 2017. It was on a rooftop overlooking all the big sights, like the Christ the Redeemer statue and Copacabana beach. Everyone was ridiculously friendly and kind. That was a great experience. I always love playing in big spaces like cathedrals or churches, as the acoustics are the best. Last year around Christmas time I played at Hull Minster, which is a large church in Hull. It’s great to feel the sounds you’re creating naturally reverberating around such a large space.

Where do you get the inspiration for your songs?
I find writing quite cathartic. I think the songs come from the subconscious. I’ll often write a song without really realising what I’m singing. A couple of days, weeks or months later, I’ll think about the lyrics I’ve written and they often reveal an insight into my thoughts and feelings at the time of writing. It helps me understand my thoughts and emotions, so it’s quite therapeutic in some ways - free therapy! In terms of the music, seeing other people play live inspires me the most. I love going to small, intimate shows.

You played on our Launchpad stage at Shrewsbury Folk Festival in the summer. How was the experience?
I loved it! I’ve been to Shrewsbury Folk Festival loads of times, and this was the most enjoyable experience. I had my sister singing with me, which was great, and it was good to play in front of family and friends and to meet some new audiences. I really liked being able to play three sets over the course of the weekend, as it enabled more people to come and watch. It’s always a great festival and I loved being able to play. The other artists playing on the stage were brilliant, so it was nice to meet them too - lots of talent!

You’re supporting Dan Owen at St Mary’s Church in Shrewsbury. How did that come about and what can audiences expect from your performance?
I’ve known Dan for over 10 years. We both used to play at the open-mic nights at The Bridges in Ratlinghope when we were about 15. I supported him in Birmingham last year at his show there. He’s doing an acoustic tour at the end of November, so I’m joining him for some of his dates as his support act. We’re heading up north to York first, then ending in Shrewsbury. He’s an amazing performer and songwriter, so it’ll be good to spend more time with him again.

What are your views on the live-music scene in Shropshire and the wider West Midlands? Is it in a healthy state?
As I said, I’ve met some of the most amazing musicians in Shropshire - most of them undiscovered. There are some brilliant venues, and it’s nice because it’s not as competitive as places like London, so you can meet people who’ll help and support you. Obviously the folk festival is big and ensures Shrewsbury is on the folk-world map.

My EP, which I recorded with help from the Alan Surtees Trust, is currently being mastered, so it will be released in the next couple of months. I’m looking forward to releasing it and finding out what people think, as it’s a different sound.

What else have you got lined up in the next 12 months?
I’m off to New York for some shows, and then it’s the Dan Owen tour. Then I’ll be busy with single launches and an EP launch in 2020. Lots to do!