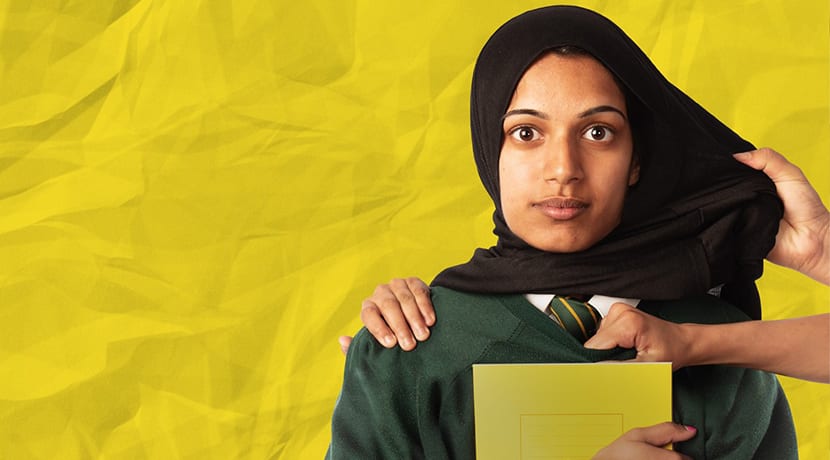 The largely unreported story behind the Birmingham schools Trojan Horse scandal is being told in a touring play which last year won the coveted Amnesty International Freedom of Expression Award at the Edinburgh Festival Fringe. Its co-writer, Birmingham-born actor Helen Monks - whose TV credits include playing Susanna Shakespeare, William’s daughter, in the hit BBC comedy, Upstart Crow - talks to What’s On about the scandal that rocked the city...

Reports in 2014 of teachers and governors plotting to Islamise Birmingham schools sent shockwaves through the city and the nation, with the local council launching an inquiry into the allegations and central government following up with their own investigation shortly afterwards.
LUNG Theatre’s critically acclaimed docu-drama adopts the same title as the inquiry - Trojan Horse - and tells the largely unreported story of how and why those accused were neither convicted nor ‘not guilty’ in court.

Adapted from the accounts of pupils from the schools involved and the teachers and governors’ testimony in court, Trojan Horse is a ground-breaking account of institutionalised Islamophobia and government prejudice.

“I’m from Birmingham,” says Helen Monks, who co-wrote the play with Matt Woodhead, “so I knew about the news when it broke but didn’t know anymore than the news pieces I read. Matt and I went into this not knowing we were going to make a play about it; we were just interested in what the real story was. It’s taken about four years for this project to come to its conclusion, and the reason for that is that we just couldn’t get our heads around it. Every single person has a different experience of what the Trojan Horse inquiry actually meant, and it’s through that interview process with people who were directly involved that the truth started to unravel. We decided we definitely had to make a play because there’s widespread misunderstanding of what actually happened. It’s very scandalous. It’s particularly interesting because no reporters actually went to hear the defence, or the cross-examination of the prosecution. and it feels like there was a real shift in the reporting on Trojan Horse once evidence exonerated the teachers and governors. The newspapers just stopped reporting on it, so the narrative has been completely set in stone since those initial allegations of institutionalised extremism. Theatre is all about narrative, so if there’s a narrative that needs to be changed, then theatre is the way to do it. We hope this play helps with that.”

So how did Birmingham schools make the national news in the first place?

“The title of Peter Clarke’s report, Trojan Horse, was taken from a letter that was supposedly sent from one Muslim governor in Birmingham to another in Bradford about this operation called Trojan Horse, explaining how to take over Birmingham schools. Trojan Horse, however, appeared much before this was ever a news story, in Michael Gove’s book Celsius 7/7. There’s a chapter called Trojan Horse, in which he warns of the Islamic plot. So in our play, people theorise that the title Trojan Horse is not one that was invented by the Muslim communities of Alum Rock in Birmingham, but was actually created by Michael Gove. That Trojan Horse letter between Muslim governors is now widely known to be a forgery. People believe that whoever wrote that letter was appealing to Michael Gove’s bias and the conspiracy theory that he already believed in - that any Muslim person who’s in a position of influence is there because they want to have complete control. The fact that Trojan Horse is this very traditional Ancient Greek historical symbol feels very white Western - so again, in my mind, it’s not very believable that that’s what followers of extreme Islam would’ve entitled this supposed plot.”

Creating Trojan Horse was a long process, but one that Helen and her dedicated team were determined to complete: “We met the teachers, governors, parents and pupils who were connected to the schools that were a part of the scandal. Over the course of the two years of writing, we did multiple extensive interviews with these individuals, and then they were also able to feed back on drafts of the script later on. We even took a first private reading of the play to Alum Rock for those affected by Trojan Horse and heavily involved in our storytelling, so that they could listen to the final script before the play even went to rehearsals. We also had to wade through a lot of other material, like the recordings of the Parliamentary Select Committees for Trojan Horse, and we read pretty much all the transcripts of the teachers’ trials. Everything in the play has come from something that a real person has told us, so the 200 hours of interviews formed into the narrative of the play. The show is set over two years: from the beginning of the 2014 academic year until when the teachers’ trials collapsed years later. So it started with meeting Tahir Alam - the man accused of being the main orchestrator of Trojan Horse - for the first time and it snowballed from there.”

With so many people’s lives affected by the allegations, how does the play approach the momentous task of sympathetically putting their stories on stage?

“There are five central characters: a teacher accused of Islamising his school, who is put on trial and gets given a lifetime ban from teaching; Tahir Alam himself is a character - the only one not anonymised in the script; there’s the character of a headteacher who feels pushed out by the governors at her school; Farrah is a schoolgirl who experiences everything first hand, from the press at her school gates to the inspectors in her classroom; and then, finally, there’s the character of the councillor, who shows how the scandal was viewed from that angle. So all the anonymised characters are an amalgamation of different people who we met, and all their stories feed into creating this one voice. Because of the way the events unfolded in the Trojan Horse inquiry, we can’t take too much credit for the narrative of the play, as it was already there for us to uncover.”

As a local, Helen is very aware that the impact of Trojan Horse on Birmingham is ongoing: “We want the play to be about opening up a conversation. Being from Birmingham, the main thing that I feel about Trojan Horse is that this isn’t a story that’s now been confined to history. It’s been left unresolved. It’s not about tearing open old wounds, it’s about trying to discuss something that continues to be prevalent in Birmingham. I also think that we would like the play to be reaching all the right people, which is why we have Urdu translation headsets available for those who need it. We’re trying to make sure the theatre is a space that’s neutral and for everybody. The main thing we’ve been so happy with about this tour is that people from all different walks of life are coming to see the show. We’re very proud that we’ve created this genuinely neutral space for everybody because I think sometimes the theatre can feel like an elite, white space. It’s exciting for these places to be reclaimed by people from such a wide array of backgrounds.”

Trojan Horse also aims to make a much broader statement...

“Alongside the play, we’ve launched a petition calling for the government to define Islamophobia because we don’t yet have a definition in law. Baroness Sayeeda Warsi is supporting the tour, has written the foreword for our play text and is very hot on the fact that there’s a huge amount of Islamophobia in politics, particularly in the Conservative Party. I think the thing about Trojan Horse is that it was a symptom of something much wider. Although we’re really keen that the play is about shining light on the injustice of Trojan Horse, it’s also about questioning how it was even allowed to happen in the first place. We’ll also be taking the play to the Houses of Parliament on the 7th of January, and we’re hoping that as many MPs as possible turn up. In particular, I hope Michael Gove RSVPs to my personal invitation!

“There was a huge amount of incompetence within the government surrounding what happened with Trojan Horse, and they want to just bury it under the carpet. We want to use the play to tell them we haven’t forgotten, and that the people of Birmingham know the truth now. If you look at those who are most complicit in the corruption surrounding Trojan Horse, they’re now in very senior positions in the Cabinet or are advisors to the new prime minister. They’ve completely got away with it, while people in Birmingham have had their lives destroyed by the story. There are people who haven’t recovered from this. Not just in terms of the city still being divided over it, but the personal health of those involved who’ve lost their livelihoods and reputation over fabricated information. It’s absolutely scandalous that people’s lives have been used as political footballs, and that those in positions of power can continue not to be held to account for their part in that.”