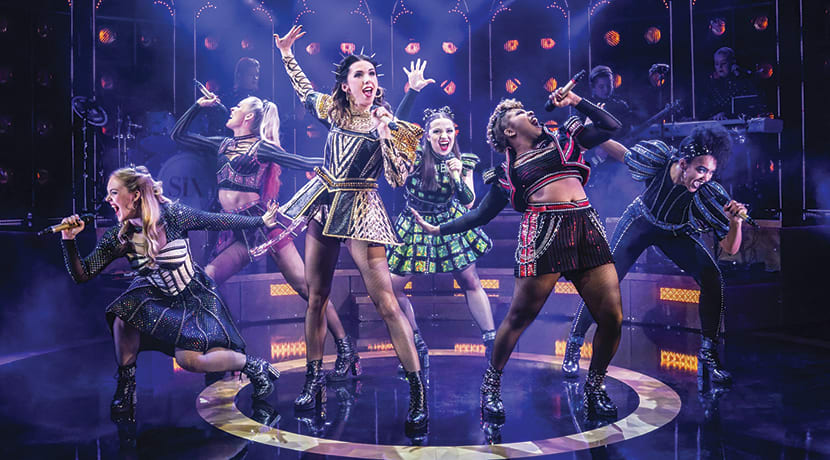 From Tudor queens to battling boss-women, SIX sees the wives of Henry VIII take to the stage to tell their own versions of their lives. This celebration of 21st century girl power sees the cast backed by the show’s all-female band, The Ladies In Waiting.

SIX’s runaway success has shown no signs of abating since it premiered as a student production at the Edinburgh Fringe Festival in 2017. The musical was nominated for five 2019 Olivier Awards, continued to sell every available seat in London’s West End and will soon transfer to Broadway - with tours also planned for Australia, China, Japan, South Korea and Canada.

“This definitely isn’t a normal musical,” says Jodie Steele, whose character’s historical counterpart is Catherine Howard. “It has only one act and is definitely more like a concert than usual - take a Girls Aloud gig and a musical and SIX is right in the middle! The running storyline is that we’re competing as Henry VIII’s wives, fighting over who had it worse.  It’s all about the competition until near the end, where the queens realise competing is ridiculous and come together instead. There’s so much historical information to get across that there isn’t room for different side-stories - we’re all on the same path. It’s a very unique concept, for sure!

“The woman who I play, Catherine Howard, is widely known as the queen who nobody cares about - and she’s Katherine with a ‘K’ in SIX. The two most famous queens, Catherine of Aragon and Anne Boleyn, refer to her in the musical as the most forgettable of the three Catherines. People talk about Henry VIII’s six wives, and when they get to Catherine Howard, they characterise her simply as ‘the slut’ and move on.

What SIX does really cleverly, though, is play on the fact that Katherine is the youngest queen - she was only 19 when beheaded - and makes her into a true pop princess: bright, bubbly, beautiful, covered in pink and enticing to everyone. She didn’t come from as good an educational background as the others, but she was just as smart. In Katherine’s section in SIX, she starts by insulting all the others with such wit that it shows she shouldn’t be underestimated. When her song begins, it’s quite sultry, but then it slowly starts to go downhill...

“Katherine tells us about the various men who treated her badly, so you get more of an idea of the true tone of the song beneath the glamour. She was abused and raped. In the choreography, the other five queens have their hands all over me while I desperately try to pull them off, so it becomes very uncomfortable for the audience to watch. It’s an odd atmosphere at the end of the song because of the uncomfortable turn it takes. The audience don’t quite know what to do because we’ve shocked them so much. I get the impression that some people feel very guilty that they didn’t know about what had happened to Catherine Howard. Henry VIII and his male contemporaries - and male historians since - just passed her off as a promiscuous young woman, and we believed it. We’re told she’s the one who slept her way to the top - and that’s just not how it was at all because she really didn’t have a choice.”

As with Katherine, each of the other queens has her own very distinct personality. Each is assigned a colour and emulates a well-known music-industry female.

“Catherine of Aragon is the first queen and married to Henry for the longest, so in the show she wears gold and is very arrogant about that. She’s the most outspoken, competitive and sassy. Music-wise she’s based on Beyonce.

“Anne Boleyn is the queen who came in whilst Catherine of Aragon was still there - and the character seems the hot favourite with the youngsters. Boleyn has that Avril Levigne rock-chick vibe, and her colour is green. Her and Aragon argue throughout the musical because they were the overlapping queens who met and clearly didn’t like each other! Bobo [Boleyn] is very outspoken, confident, quirky and has plenty of cheeky one-liners. I’d say she’s my favourite queen in the show.

Jane Seymour is the total opposite of the first two: she’s reserved and quiet, just like Seymour was in real life. She’s the queen who gave Henry his son, Edward, and then died. Henry really did love her and she really did love him. So her song is a ballad like those from Adele, and she wears white in her costume to signify innocence. But then obviously our show is pulling history into the future, so Jane still has more of an edge to her than a Tudor queen would’ve been allowed.

“The latter queens aren’t as talkative and feisty as the first three. Anna of Cleves (Anne of Cleves in history) is laid-back and doesn’t argue - but she’s also the biggest, badass boss-woman out of all six.

Cleves can’t win the contest of who had the worst time from Henry and she knows that. Henry decided Anne was really ugly and didn’t want to be married to her, so she managed to play that to her advantage, twist his arm and get loads of money and a palace out of him. Her song is rap, like Lil’ Kim, and she wears red.

“Then comes me as Katherine at number five - channelling pretty-in-pink Ariana Grande. The survivor, Catherine Parr, dons blue and is very quiet throughout the show, sitting back to watch the situation very much like Parr did in real life. She was an incredibly intelligent woman who knew that to outlive Henry and not end up like the previous five queens, she just needed to sit on the sideline and hold her tongue. Even though Parr was Catholic and fought against the new religion Henry created to divorce Aragon, she very much had to keep her opinions to herself after he took a liking to her. She’s the calmest and sternest out of the six, biding her time until her solo - an absolutely huge Alicia Keys-esque song that unites all the queens.

“Then we do the last three numbers as a group, flipping history on its head and saying how it would’ve been if these six very different but equally amazing women had lived nowadays.”

In the end, SIX is all about female empowerment.

“The queens finally come to realise that they’re all equal and there’s no need to fight each other, which I think is so relevant to now. Neither our obsession with social media and comparing ourselves to others, nor the online trolling that comes out of it, are healthy things. SIX is really fighting against that. I think that SIX really is right up there in the women’s movement that’s happening at the moment, showing that women can have a say while supporting one another. Women having to sit on their opinions or do things they don’t want has no place in our society.

“There are plenty of boys and men who’re fans of SIX too, which is so, so important. In this movement of empowering women, we  absolutely have to get males involved too, or we’ll never get where we want to go. We will never be able to change what happened to Henry’s wives, but somehow we’ve changed their fate for the youngsters and used their tragic stories for something good. Teachers message me thrilled with what we’re doing with SIX, as their pupils come to school after seeing it brimming with excitement for history and wanting to know more about female historical figures overlooked in a man’s world. Seeing history from a woman’s point of view is so different. SIX is all over the world. It’s really unstoppable and doesn’t seem to be tiring!”

The SIX cast album is the second highest-streaming cast recording in the world. Why does Jodie think this is?

“The music is so current and plays on lots of young people’s idioms while also using social-media slang. I think sometimes pop doesn’t want to be too cheesy so doesn’t play on that, but SIX really has fun with that idea in the lyrics. It’s just so current, catchy and cheeky! And it builds to this massive rock chorus at the end. People of all ages can’t help connecting with the show. Adults have a little laugh to themselves when they recognise how their teenagers speak, and the kids, teenagers and young adults themselves find it relatable. In terms of the score as a whole and the success of the album, because every song is so different, it’s like going to an ice cream parlour and being able to get all the flavours: pop, rock, ballads, house. In that way, it’s like the album is a compilation of strong women in music.

“It’s funny and ironic, though, that in a show where it’s all about being equal, it’s so easy for people to pick their favourites. People come away loving the queen who ‘spoke’ to them the most, and that’s fine. You can identify with one person more than another, but that doesn’t mean you have to try and bring down the women you don’t relate to as much.

The musical’s ethos even impacts on the cast members’ off-stage relationships with one another: “I’ve been so lucky in my career; I’ve done so much in my seven years as a professional. I’ve covered, I’ve been an alternate standby and I’ve been a leading lady, but SIX is so special because every single person is so equal. All shows say that it’s a ‘team effort’, but I think with the manner in which the musical’s message makes its way into the very dynamics of the cast, it’s even more the case with SIX. We’re so supportive of each other, so I love living in and sharing SIX’s message. If we just pick each other up rather than bring each other down, then wow, the world will be a better place to live in.”