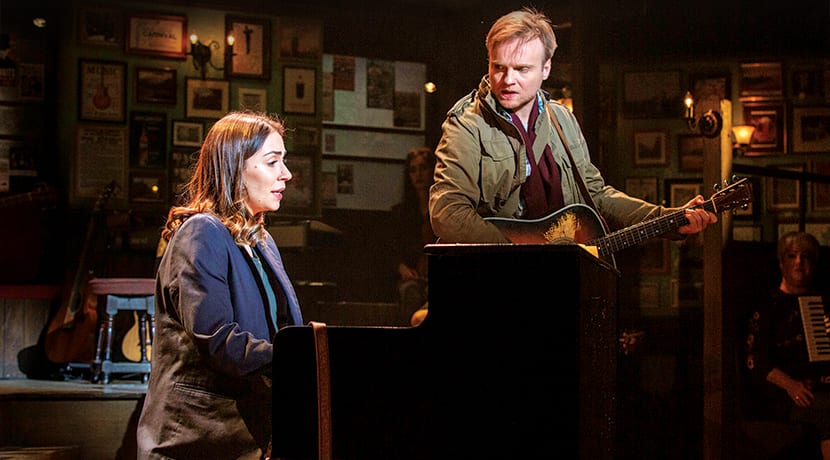 Runaway West End and Broadway hit Once The Musical focuses on the passionate love experienced by two musicians, not only for their craft but also for one another. A new touring production will next month be casting its spell over Midlands theatre-goers. What’s On met up with the stars of the show...

Based on the 2006 cult feature film of the same name, Once is about two lost souls - a Dublin street busker and a Czech musician - who unexpectedly fall in love. The musical follows the pair’s lives over a period of five days.

Once’s Celtic folk music and lyrics - written by the stars of the film, Glen Hansard and Markéta Irglová - have won Grammy, Academy and Olivier awards. Complete with a book by award-winning Irish playwright and screenwriter Enda Walsh, Once also took home the coveted Tony Award for best musical in 2012.
So what has made this heartwarming show such a resounding success?

“I think it’s a combination,” says Emma Lucia, one of the stars of the touring production that’s next month visiting the Midlands. “The storyline itself is so naturalistic - so much so that it appeals to all kinds of people of all ages and backgrounds. But also it’s the fact that all of the music is played by the actors on stage. It’s very unique in that sense.”

“The story itself is definitely something everyone can connect to,” adds Emma’s co-star, Daniel Healy. “We’ve all had those crossroads moments in life, those real chances or decisions that people often look back on and wish they’d dealt with differently. Once is about that kind of moment. It’s a real urban fairytale: it's got great music with an Irish connection, a genuine story about love and loss, and a narrative about dreams coming true.”

Dan has been involved with the show for many years and feels a real affinity with his character, Guy: “I might have picked up a few tips being in the West End cast! I understudied the lead in that, so I’ve seen many different incarnations. But I can honestly say that this is the best cast there’s been out of all of the versions I’ve seen or been involved with - and that’s not including myself, by the way! This cast is so bloody talented! Everyone involved in Once is a joy to be around, and I think the audience will feel that reflected in the show.

“Guy is a really great part that everyone can bring their own take to because he is so relatable. I would say that he’s really the closest character to myself that I’ve ever played. I’m a singer-songwriter who busked for years when I was young, so there are elements of Guy that I’m so connected to. Just like Emma, I saw the show and realised that was the part I was meant to play. But at the time in my life I first auditioned for the Broadway show and was then an understudy in the West End, I do think I was too young. So it was the right decision to wait until now to take the lead. The cool thing about Guy is that he is the ‘any man’ or ‘everyman’ - and now I’ve seen so many different versions of him, I can really make the part my own. The character in himself is almost nondescript, as it’s the pain and the journey in Once that’s perhaps more important. He’s like a blank canvas.”

With a background both as an actor and a musician (but very separately), Dan doesn’t consider himself the typical musical theatre performer: “I come from my acting and my singer-songwriter background above anything else, so I’ve had a real dual career in that way. I’ve managed to play music at quite a high level and be in West End plays, so I’m very lucky in that sense. What I think is great about Once is that it attracts people on both sides of the coin: whether you’re a massive musical theatre fan or prefer plays, Once is a show you’ll want to see. Moderate and hardcore theatre-goers and musical theatre lovers alike will be captivated by it. Guy is literally my dream role. The part could’ve been written for me in a sense, because of my Celtic upbringing and being an actor/musician.”

“I became good friends with Ronan when he played Guy in the West End and I was his understudy. I just saw him as this hugely successful fella who was following a similar path to me, and we became great mates. He heard one of my songs online and asked me if I’d do some writing for him. I ended up doing six songs on one of his albums, and then a slot opened up in his band about four-and-a-half years ago. So I’ve played with him ever since then, touring the world and everything. It's been really great! I’m still writing songs with him now, including one for Netflix’s Galapagos. But over and above all that, he’s a good pal, and hopefully he’ll come down to see the show.”

And what about Dan’s own music?

“I’m absolutely still working on that, too. It has crossed my mind that, as soon as Once has settled down a bit and we’ve got into the rhythm of touring, I might slowly start putting something together. I hope to have a new album finished by the time we stop touring!”

Emma is returning to the role of Girl.

“It’s great to revisit the part because, in our line of work, you can always dig deeper into a role, get more out of it and give more to it. I definitely relate to Girl’s personality more than her circumstances. For example, I don’t have a child and I’m not Eastern European, but I think I do relate to her optimistic outlook. She’s very positive and tries to be quite uplifting for others, even if she’s not feeling great herself - and that’s definitely something I try to do and the type of person I continue to aspire to be.

“With Once, I’m playing a lead role as opposed to covering it, like I did with Beautiful: Carole King The Musical. I’m actually really glad that I did that first, as being in the ensemble and being a swing or understudy is a real rite of passage. You learn what it feels like to be a part of the show but not front-and-centre. Then I think you are even more appreciative both of your big break and your other cast members too. It’s a big step up in terms of pressure, but I feel so excited and lucky to be playing a lead role at my age.”

So why should Midlands theatre-goers go to see Once? Emma continues: “Markéta Irglová, who co-wrote the music, said that you can be a complete stranger to someone but once you start making music together, it’s like your souls merge. There’s something about that unspoken connection - the way music brings people together regardless of background - that Once captures in the best possible way.”

“There are a lot of people out there who are genuinely inspired to chase their dream, whatever that may be,” says Dan. “Once has a lasting effect, which I also felt when I watched it myself. It really does encourage people to make sure they’re doing what they love. Art should be all about getting right outside your own headspace and being taken on an incredible journey - and, of course, for you then to reflect it onto your own life and experiences. It’s so humbling to see people so moved by this musical, especially when you’re just going out there to do a job you love and giving absolutely everything you can. Once is a beautiful piece, besides being multi-award-winning, and this is your opportunity to see it in its best form yet!”