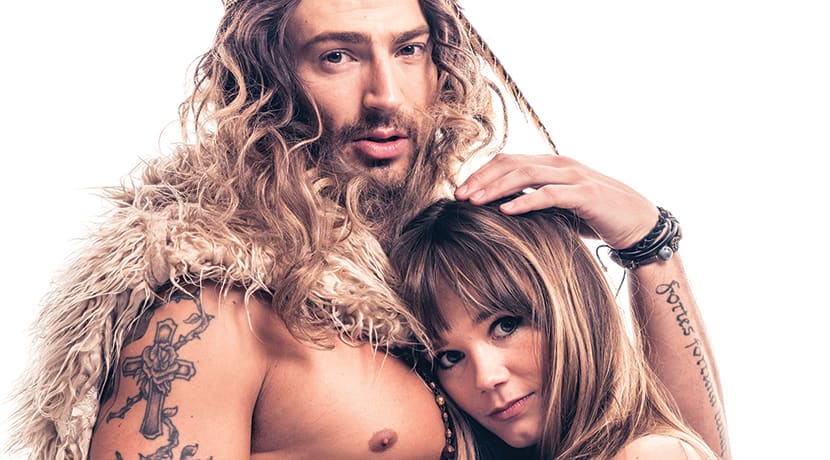 The 50th anniversary production of legendary rock musical Hair stops off in the Midlands this month… What’s On spoke to its stars, Jake Quickenden, Daisy Woods-Davis and Marcus Collins, to find out more…

Hair heads out on its UK tour straight off the back of a sell-out run in London. Although it’s set in New York in 1967, the show nonetheless explores a number of subjects that remain relevant in the 21st century.
Inspired by the late-1960s sexual revolution, very much a product of the hippie counterculture of the time, and unfolding against the backdrop of the Vietnam War and widespread anti-war protests, the show follows a group of rebellious youngsters as they chase their dreams of living a bohemian existence and avoiding conscription.

The show’s Grammy Award-winning score features numerous songs that became anthems of the anti-Vietnam War peace movement, not least among which is opening number Aquarius.

Premiering off-Broadway in autumn ’67, Hair immediately caused controversy. Its nude scene, use of profanity, depiction of illegal drug use, lack of respect for the American flag and deployment of a racially integrated cast marked it out as a show that was seemingly sticking up two fingers to the conservative establishment.

Not surprisingly, the conservative establishment was less than impressed.

Fifty-plus years after its debut, Hair remains best known for its brief nude scene at the end of act one. So how does Jake’s co-star and former Hollyoaks actress, Daisy Woods-Davis (who plays university student and political activist Sheila), feel about nakedness on stage?

“As an actor, something like this is going to happen, whether it’s a naked scene on stage or a sex scene in a TV show. With theatre, it’s a really intimate, respectful space. I think it’s also important from a body-confidence point of view. We’re all just real people. It’s kind of crazy that we’re all confined to this view that bodies shouldn’t be seen. I hope it’s a liberating experience.”

X Factor finalist Marcus Collins also takes a leading role in the show, playing the character of Hud. Marcus was particularly drawn to the musical’s engagement with the problem of racism in late-1960s America:

“One of the main points that touched me was the era in which it’s set. Civil rights had just come in, but racism was still so heavy. In this show, I use words that I wouldn’t even use to refer to my worst enemy; words that have been used to me and which made me cry my eyes out when I was young. As I’ve grown up into the black man I am today, I’ve taken ownership of those words and I understand them. Those words are not to be ignored and pushed aside. The ‘N’ word was the last word that so many people heard before they were hanged, before they died, before they lost their lives due to the fact that they were born black. I’m mixed race and I still find it difficult to hear that word. It’s going to be fascinating to watch the dynamics of that, and how different audiences react.”

Marcus also believes that many of Hair’s themes continue to resonate today: “Nothing has changed.

Presidents throughout time have gone to war. People are still being forced into not being who they really are because of the status quo. You’re not seen as enough if you don’t have a full-time job. You’re not enough unless you have the flashy car, the wife and children. You can’t be sexually fluid, you can’t be gender fluid, and you can’t grow your hair out. There are still too many rules. People need to be more understanding about what other people choose.”

For Jake Quickenden, the chance to play Berger is a dream come true: “He’s mental, which is perfect for me! He’s the one they all expect will play up the most and be the most rebellious, so I get to be a bit of a loose cannon. Everyone thinks that I’m in character the whole time, but I’m just being myself!”

Hair marks Jake’s musical theatre debut, and it’s one he’s been looking forward to immensely: “The world is run by technology. Everybody’s on their phones or watching Netflix, so it’s great to see actual talent perform live on stage in a production where everyone is working hard. It’s a fantastic excuse to get dressed up, have a few glasses of prosecco, come watch an amazing show and get lost in theatre. Also, not everyone can afford to get to London. Not everyone can afford to stop over in a hotel there. It’s massively important to give each city a chance to see amazing productions.”

While Jake’s enthusiastically looking to the future and his tour with Hair, he’s not averse to reflecting on the past - and in particular his appearances on three of television’s most popular reality shows: “I appreciate The X Factor because it landed me where I am now, but I just wish I’d done a better job there because I don’t feel that I did myself justice. Then there was Dancing On Ice, which is much harder than people think. I trained for eight hours a day on that show. It was tough but it paid off. And I’m A Celebrity was just fun. Seriously, I’ve been on worse holidays. I just chilled in a hammock and ate rice and beans. I felt like Bear Grylls!”

Hair The Musical shows at The Alexandra Theatre, Birmingham, from Monday 29 April to Saturday 4 May and Wolverhampton Grand Theatre from Tuesday 23 - Saturday 27 July.