Antony Costa talks ahead of Rock Of Ages 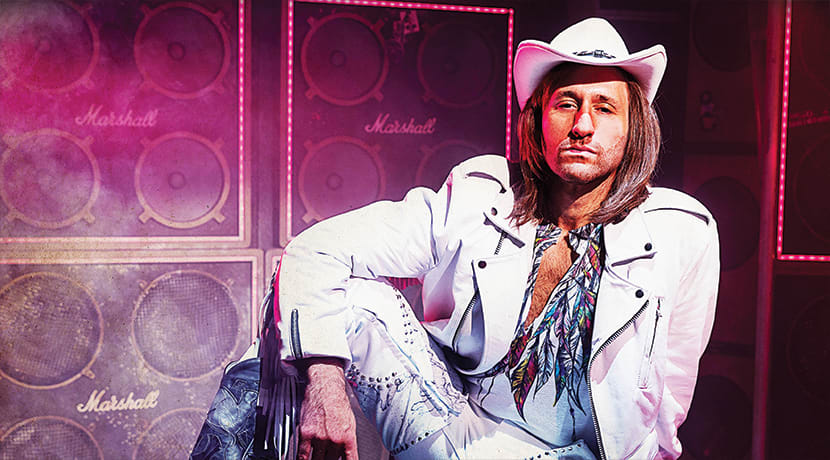 A quarter of one of the most successful boy bands of all time, Blue’s Antony Costa is now turning his hand to playing rock star Stacee Jaxx in the UK tour of Rock Of Ages, which visits Wolverhampton late this month.

How are rehearsals going for Rock Of Ages?
I properly start rehearsals next week, so I’m excited about that. I can’t wait to meet the cast and get my teeth into the material. Stacee Jaxx is a part I’ve loved since seeing it in the West End, so it’s going to be good.

As the show is currently touring, you will be joining an existing company. How do you feel about that?
I’m very nervous, I’ll be honest with you, but excited at the same time. I could join the company and find a friend that I’ll have for the rest of my life. I’m told everyone is really lovely, so I’m looking forward to it.
Does Stacee spark recollections for you of being in Blue, with so many adoring fans following you around?
I can sort of relate, but I was never an idiot like Stacee Jaxx! He has fans swarming around him and thinks he’s a rock god, but I certainly wasn’t! Towards the end of the show, you see the real Stacee coming through, who is actually alright. His persona is more of a façade.

Do you have a favourite song to perform?
Dead Or Alive - 100%! It’s just insane. My 15/16-year-old rock self is able to come through, and I can’t wait to perform it to a live audience.

Has it been a difficult transition from singing pop songs to ’80s rock classics?
Yes, I’ve been going to vocal lessons with a woman who specialises in singing rock music. I’ve got a powerful voice, but I’m having to learn how to sustain it over eight shows a week. It can take its toll on your voice, so I’ve got to treat it as a muscle that’s new to me. When I’m singing Blue songs, I could do them with my eyes closed, not because I’m lazy but just because I’ve been doing them for so many years. However, when you’re on your own and the spotlight’s on you, there’s a lot of pressure.

Do you think the 2012 film version of Rock Of Ages is a good representation of the stage production?
I saw the film when it came out, but I don’t know if it did the show any justice. I understand why they made a film, but I wasn’t sure about some of the casting decisions.

What do you enjoy most about being part of a musical company?
I love it because I get to meet and know different people from various walks of life. Speaking from a personal perspective as well, I love the fact that I can be someone else for two hours every night; that’s what I’m looking forward to.

Have you toured to Wolverhampton before?
Yes, I came to Wolverhampton two years ago for a play I was in called Judgement In Stone. I was only in the city for two days, as I had to leave sharpish on the Thursday because my other half was having our second baby, but I do remember the Wolverhampton crew were brilliant and a lovely bunch of people, so it will be nice to go back there, for sure.

How long are you contracted with Rock Of Ages?
I start in Eastbourne in early April and finish in your lovely city of Wolverhampton on the first of June, so I’m in the show for eight weeks.

Does a shorter contract appeal to you?
I’ve never actually done a short contract, so it’s quite new to me. Sometimes with a six to 12-month contract, by the third or fourth week, you feel really into it and could do it with your eyes closed. With my eight-week contract, I’ll literally be in and out, which is a bit sad as I’ll probably make some good friends whom I won’t want to leave so soon. But that’s life!

Do you have anything in the pipeline after Rock Of Ages?
I hope so. I’ve been speaking to a few producers about potential projects. I tend to do panto every year, but I don’t know where I’ll be yet. I love panto, it’s my guilty pleasure!